Data from Cointelegraph Markets and CoinMarketCap confirms that XRP is now barely holding on to the fifth-largest cryptocurrency spot and could soon leave the top five altogether.

Ripple gets flippled… a second time

The new order among large cap altcoins comes as a new “altseason” hits the market, with investors’ chosen targets differing considerably from the last in early 2018.

Among the victims is Bitcoin Cash (BCH), which as Cointelegraph reported was removed from the top ten altcoins courtesy of Stellar (XLM) and Dogecoin (DOGE) this week.

In the case of XRP, the losses could have been worse. Trading at $0.46 at the time of writing, the token  previously traded as low as $0.16 amid legal problems at major shareholder Ripple.

While those issues remain unresolved and United States regulators may still class XRP as an unregistered security, its fortunes have nonetheless improved in recent weeks.

With its impressive gains throughout 2021, however, Polkadot proved that one of the oldest altcoins on the market was no match for it. DOT/USD has risen by over 40% in the past week alone, having already flipped XRP for a brief time in January. 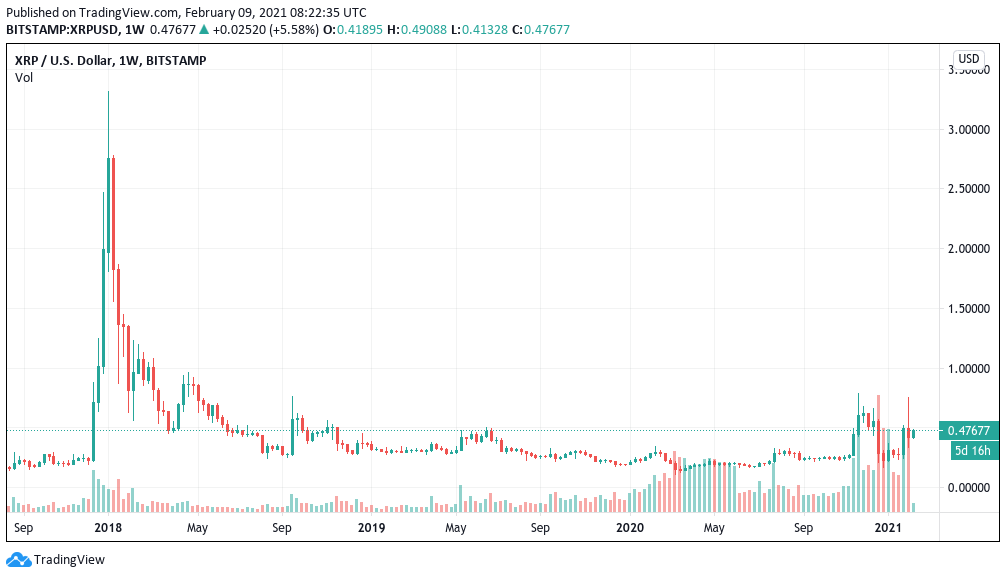 Cardano lines up for top 5 shot

With that, XRP in the top five cryptocurrencies by market cap could soon be a thing of the past as fellow contender Cardano (ADA) sets its sights on a sidestep of its own.

Despite the lack of progress versus all-time highs, the altcoin’s infamous army of social media proponents continues to believe that the good times are just around the corner.

In terms of major adoption, however, XRP has been left in the shade as big business buys Bitcoin (BTC) and institutions further embrace Ether (ETH).