Over the past seven days, the crypto market saw an uptick in volatility as Bitcoin (BTC) and Dogecoin (DOGE) price rallied higher simply because of social media activity. In situations like these, traders who make their investment decisions based on emotions tend to incur heavy losses and this is exactly what happened last week.

Dogecoin’s (DOGE) recent pump and dump caused several new traders who bought due to FOMO to lose money within a short time and this scenario is likely to play out again as social media groups have decided that collective pumps of altcoins is a new method of investing.

A similar trend currently seems to be developing in Bitcoin (BTC), which has retraced a large portion of the up-move that was caused due to the “Elon pump” on Jan. 29. This shows that barring a few emotional buyers, most professional traders may have used the rally to lighten their long positions. 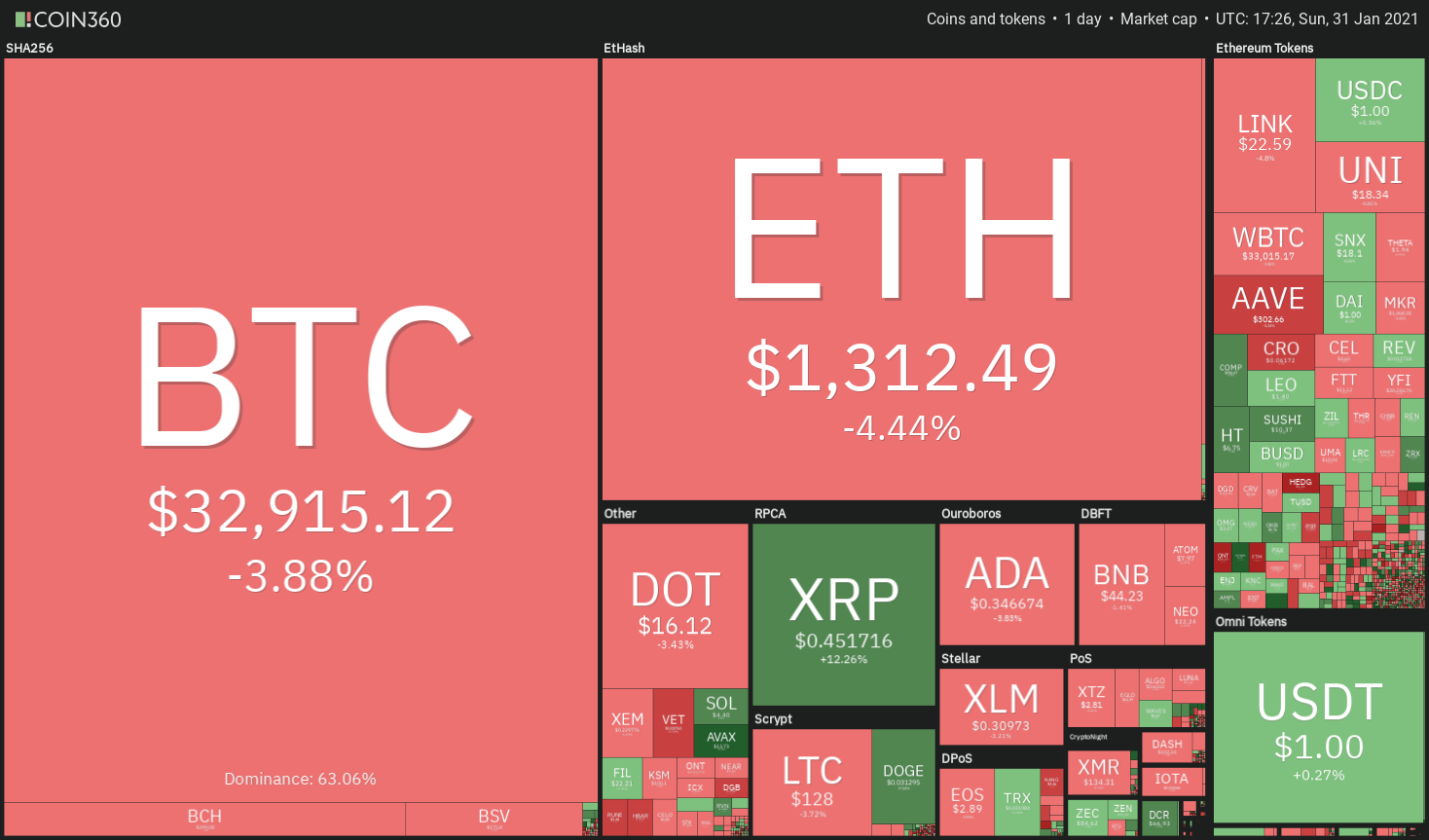 Stack Funds head of research Lennard Neo believes the Bitcoin miners are selling on rallies and that trend may continue as the Chinese New Year holiday approaches. Neo expects Bitcoin’s price to remain volatile in the near term.

Even as Bitcoin’s price consolidates, the decentralized finance tokens continue to surge, which suggests traders’ focus has shifted to the DeFi space. Let’s analyze the charts of the top-5 cryptocurrencies that could trend in the next few days.

Bitcoin’s long wick on Jan. 29 shows the bears aggressively sold the rally above the downtrend line of the descending triangle. That was followed by a Doji candlestick pattern on Jan. 30, indicating indecision among the bulls and the bears. 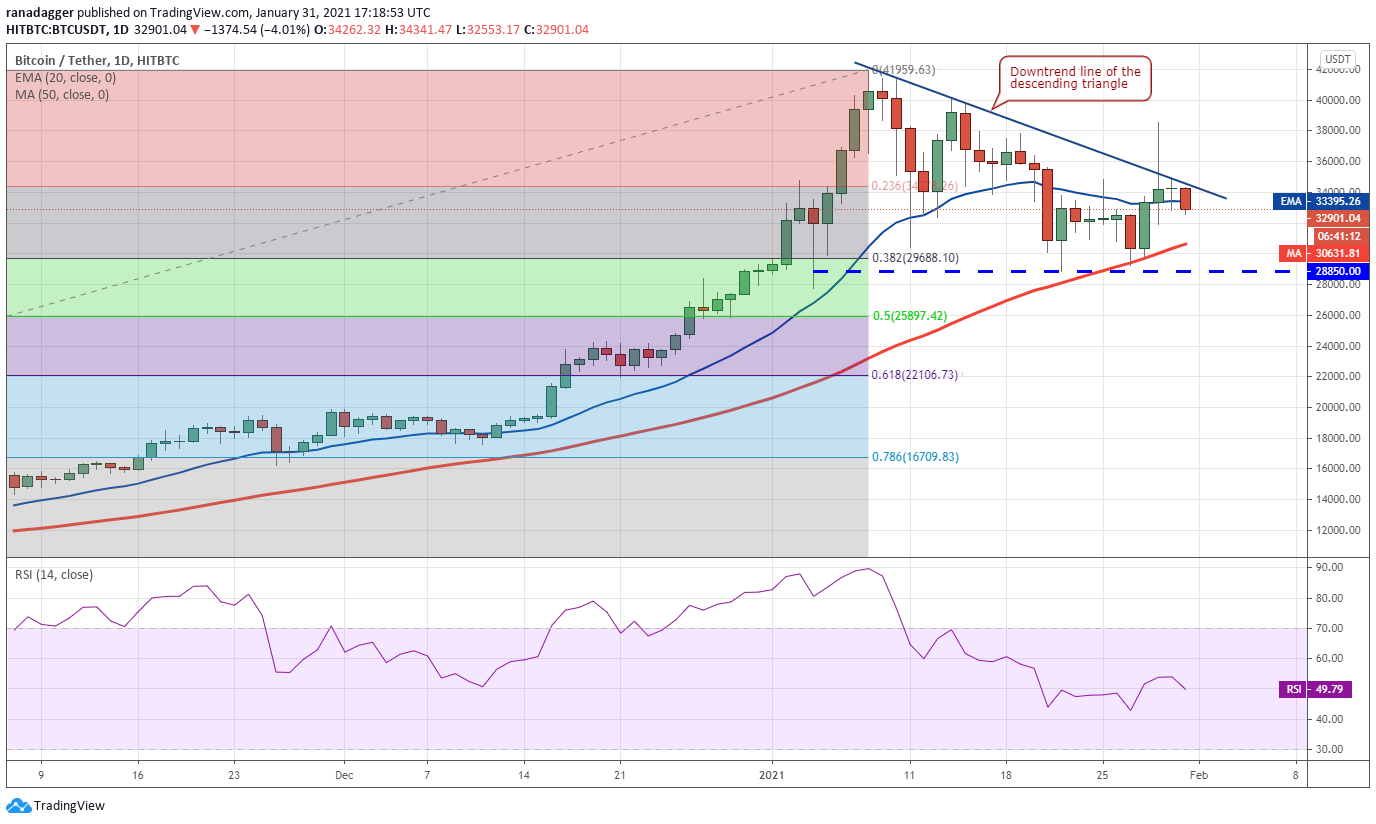 The failure of the bulls to push the price above the downtrend line today has attracted further selling. The bears are currently trying to sustain the price below the 20-day exponential moving average ($33,395).

A breakdown and close below $28,850 will complete the bearish descending triangle pattern that has a target objective at $15,741. However, it is unlikely to be a straight fall because the bulls will try to arrest the decline at the 50% Fibonacci retracement level at $25,897.42 and again at the 61.8% retracement at $22,106.73.

This negative view will invalidate if the price turns up from the current level or rebounds off the $28,850 support and sustains above the downtrend line. Such a move will suggest strong accumulation at lower levels, which could result in a rise to $40,000. 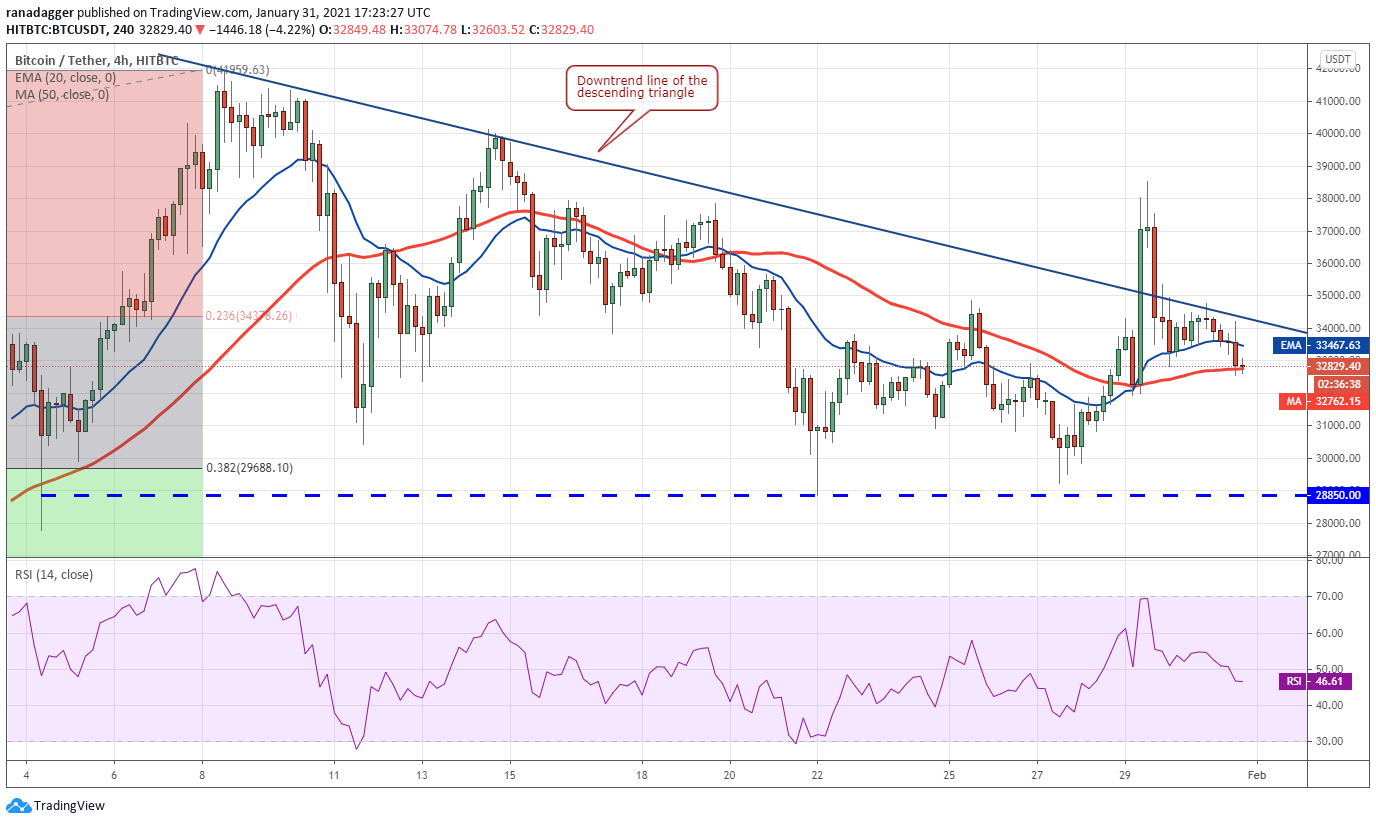 The 4-hour chart shows the breakout above the downtrend line met with strong selling pressure and the price quickly retracted back into the triangle.

The failure of the bulls to push the price back above the downtrend line has attracted selling and the bears have pulled the price below the 20-EMA. The bulls are currently attempting to defend the 50-SMA but if this support also cracks, the pair may start its journey towards $28,850.

This negative view will invalidate if the price rebounds off the current level and rises above the downtrend line. Such a move could push the price to $38,519.63.

Ether (ETH) broke above the $1,400 resistance on three previous occasions but the bulls could not sustain the breakout, which shows profit-booking at higher levels. However, the positive thing is that the bulls have not given up much ground in the past few days. This shows the bulls are accumulating on dips. 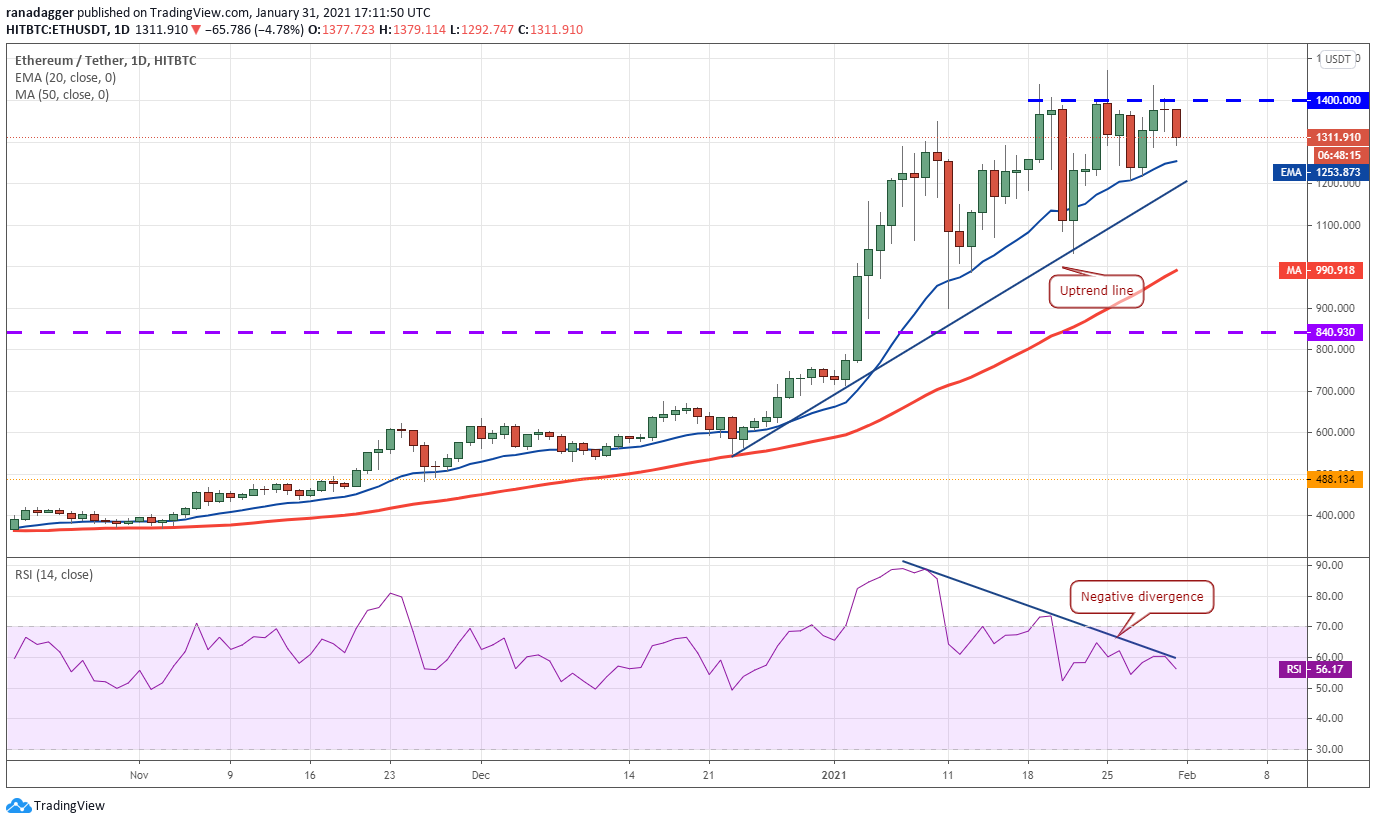 The ETH/USD pair had formed a Doji candlestick pattern on Jan. 30, indicating uncertainty. That indecision has resolved to the downside today and the pair may now drop to the 20-day EMA ($1,253), which is likely to act as strong support.

A bounce off the support will suggest the sentiment remains bullish and traders are buying on dips. The bulls will then try to resume the uptrend. If the bulls can drive the price above the $1,400 to $1,473.096 resistance zone, the pair could rally to $1,675 and then to $2,000.

This bullish view will invalidate if the bears sink the price below the 20-day EMA and the uptrend line. In such a case, the pair may drop to the 50-day SMA ($990). 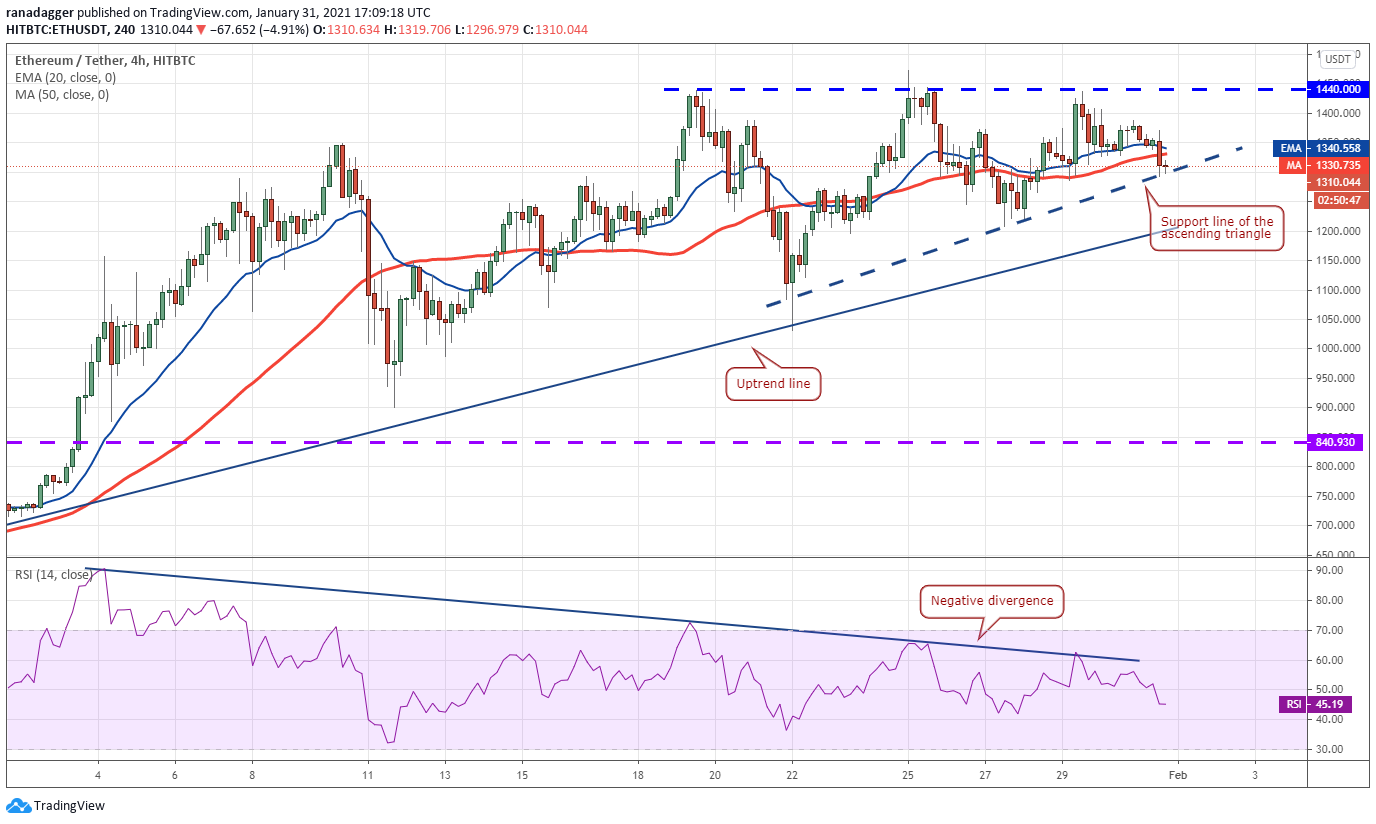 The 4-hour chart shows the formation of an ascending triangle pattern, which will complete on a breakout and close above $1,440. This bullish setup has a target objective of $1,768.

However, the moving averages have flattened out and the relative strength index (RSI) is just below the midpoint, which suggests a balance between supply and demand.

If the bears sink the price below the support line of the triangle, it will invalidate the pattern. The next support on the downside is the uptrend line and then $1,050.

Uniswap (UNI) is in a strong uptrend that has pushed the RSI deep into the overbought territory. While the RSI can remain overbought for an extended period, traders should be cautious as corrections from overbought levels can be swift and sharp. 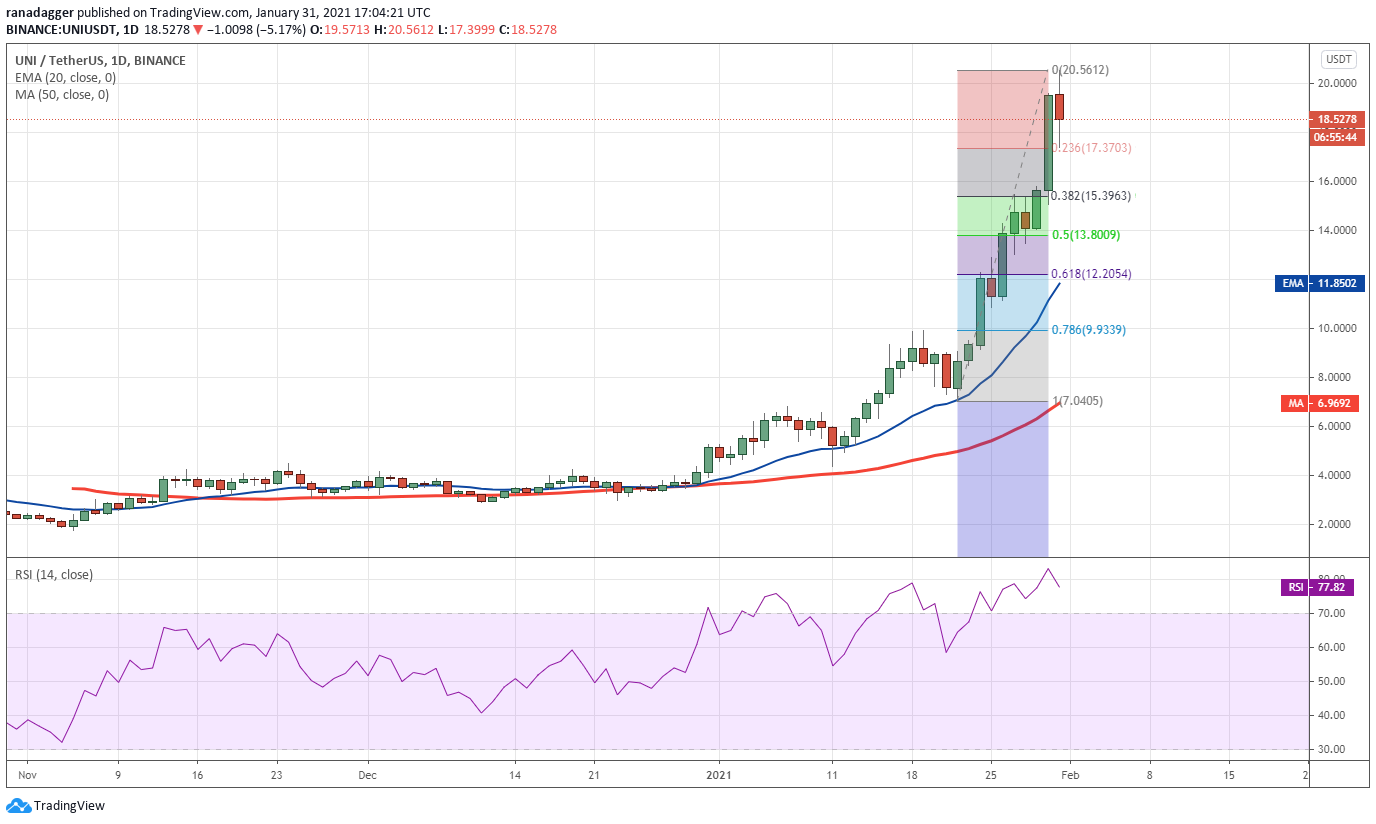 The first support on the downside is the 38.2% Fibonacci retracement level at $15.3963. If the price rebounds off this level, it will suggest the bulls are aggressively buying the dips and are not waiting for a deeper correction to enter.

If the bulls can push the price above $20.5612, the UNI/USD pair could rally to $28 and then to $32. Both moving averages are rising and the RSI is above 79, indicating the bulls are in control. 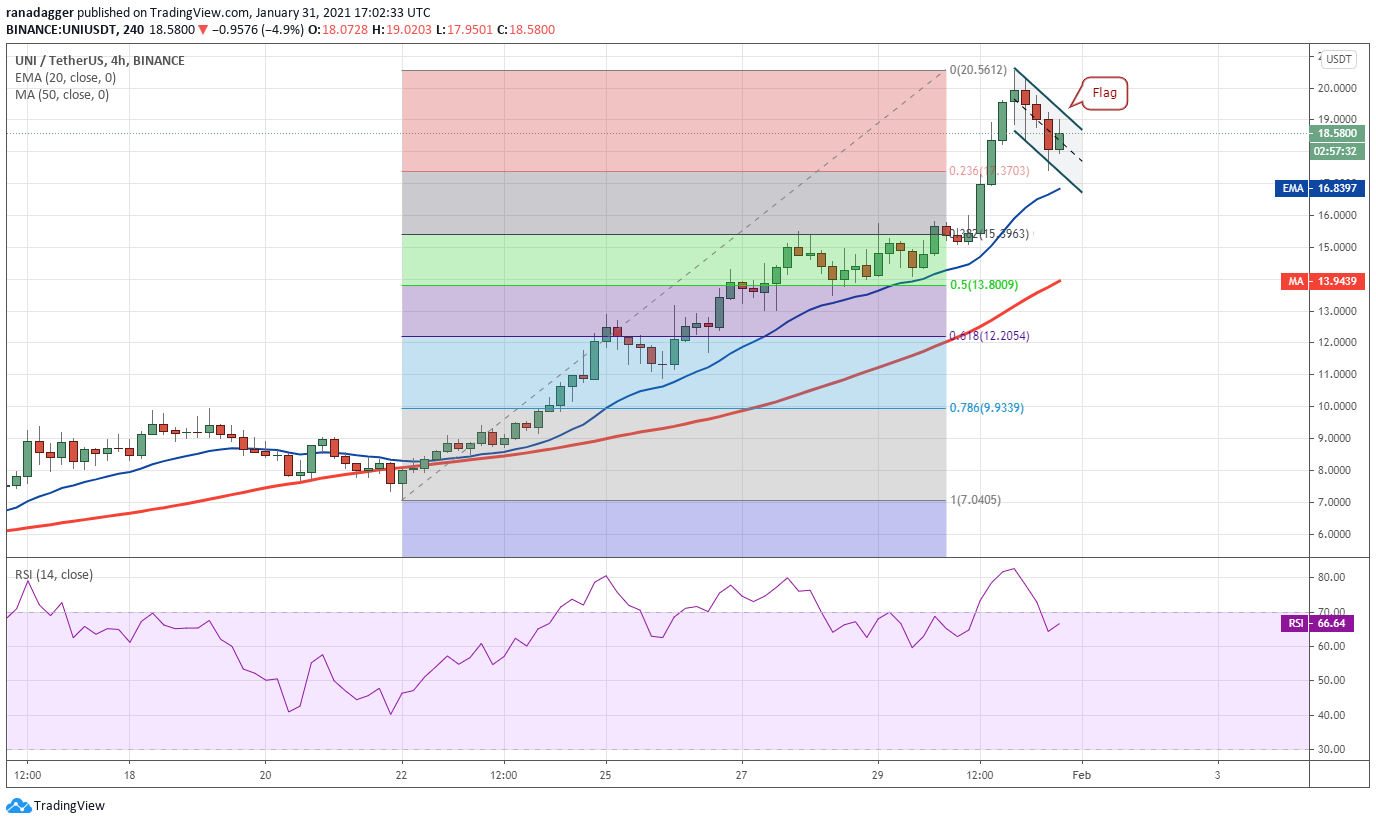 The 4-hour chart shows the pair has made a flag pattern. If the bulls can push the price above the flag, the uptrend could resume and the pair may rally to $22 and then to $25.

Another possibility is that the pair continues to correct and drop to the 20-EMA. If the price rebounds off this support, it will suggest the sentiment remains positive and the bulls are buying on minor dips.

During the current leg of the uptrend, the price has repeatedly taken support at the 20-EMA. Therefore, a break below the 20-EMA will suggest the bullish sentiment may be waning and could result in a drop to $15.3963 and then to the 50-SMA.

Cosmos (ATOM) has formed a cup and handle pattern that will complete on a breakout and close above $8.877. If the bulls can propel the price above the $10.20 resistance, the uptrend could begin. 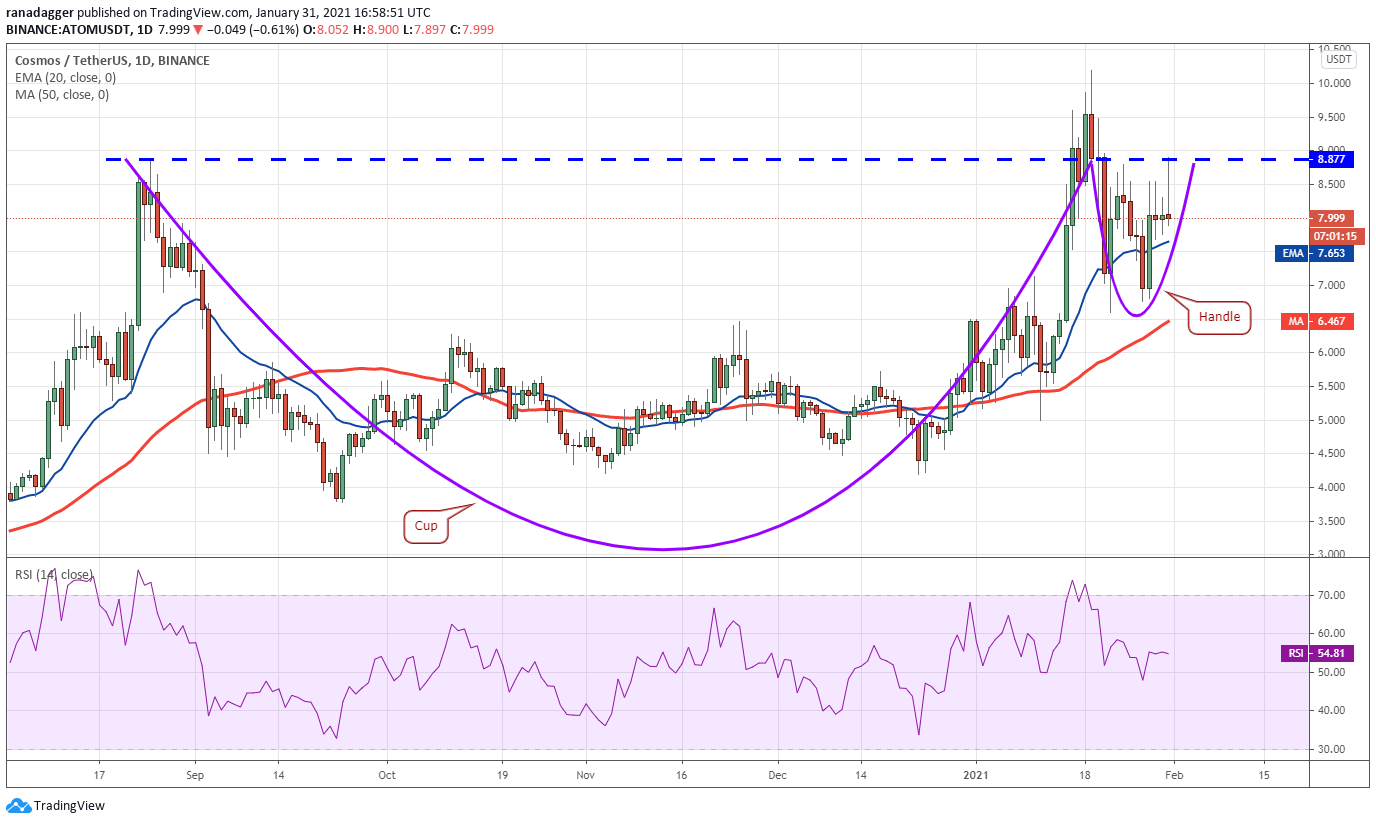 The first target on the upside is $11.151 and the next level to watch out for is $13.554. The rising moving averages and the RSI’s bounce from the midpoint suggest the bulls have the upper hand. 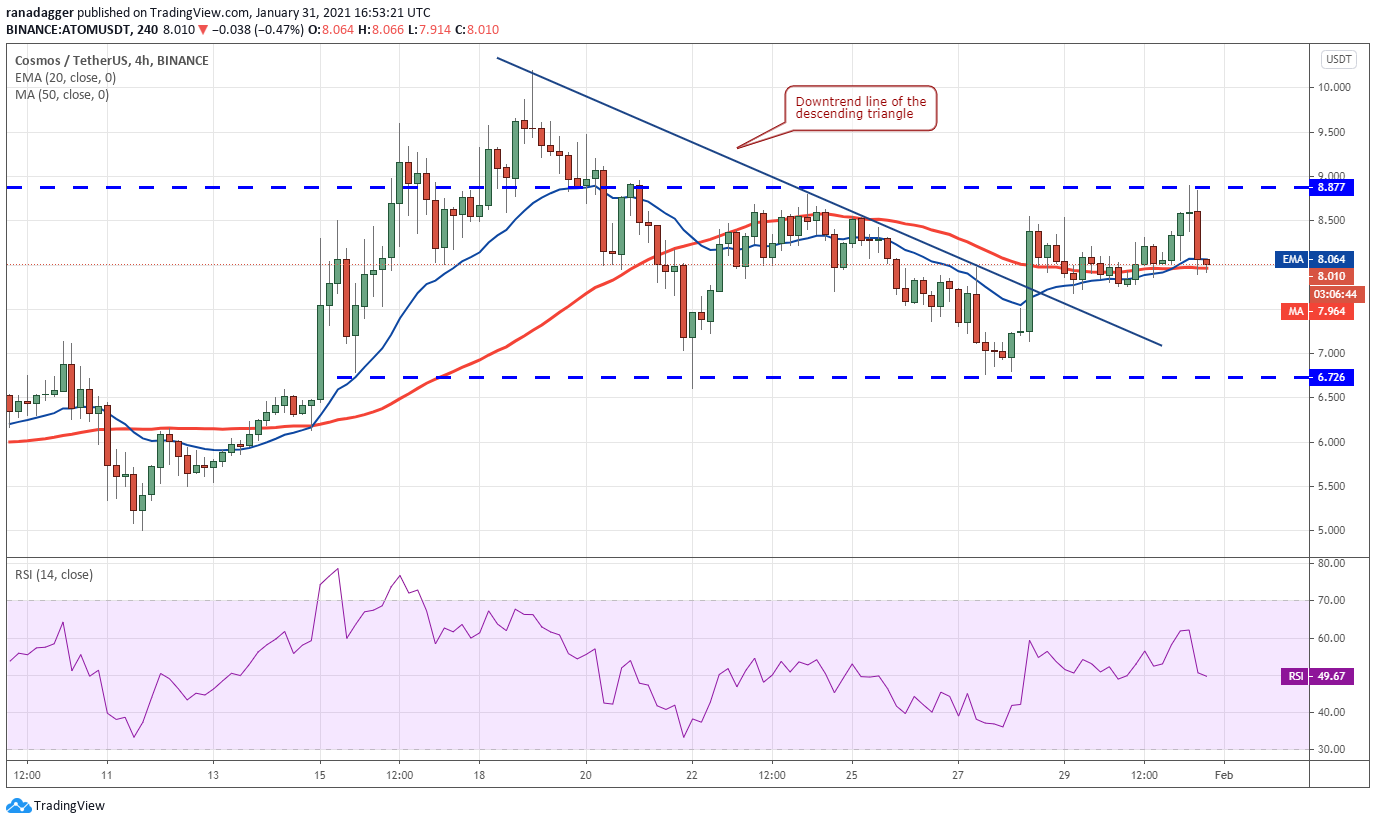 The flat moving averages and the RSI near the midpoint suggest the pair may remain range-bound between $8.877 and $6.726 for some more time. If the bulls can propel the price above $8.877, the pair could rise to $10.20, while a break below $6.726 will suggest the bears are trying to make a comeback.

Compound (COMP) completed a rounding bottom pattern on Jan. 29 when it broke and closed above the $272.61 resistance. This reversal setup has a target objective of $464.60. 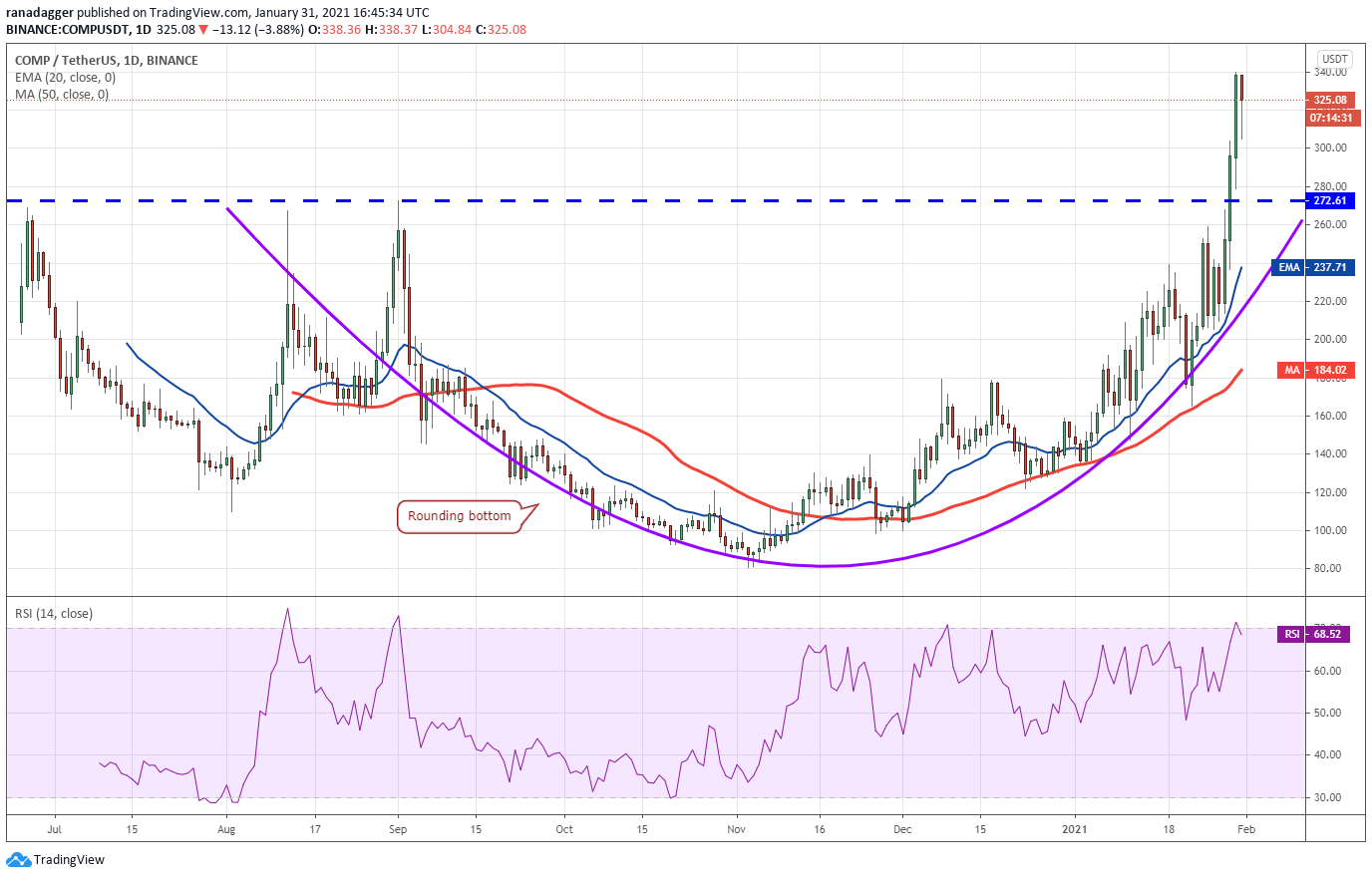 The upsloping moving averages and the RSI near the overbought territory suggest bulls are in command. After the breakout from a pattern, the price usually retraces and retests the breakout level, but if the trend is very strong, it only consolidates or enters a minor correction before resuming the up-move.

If the COMP/USD pair rebounds off $272.61, it will suggest the bulls have flipped the previous resistance into support. That could then act as a launchpad for the next leg of the uptrend.

This positive view will invalidate if the bears sink and sustain the price below $272.61. Such a move will indicate profit-booking at higher levels and a lack of buying on dips. 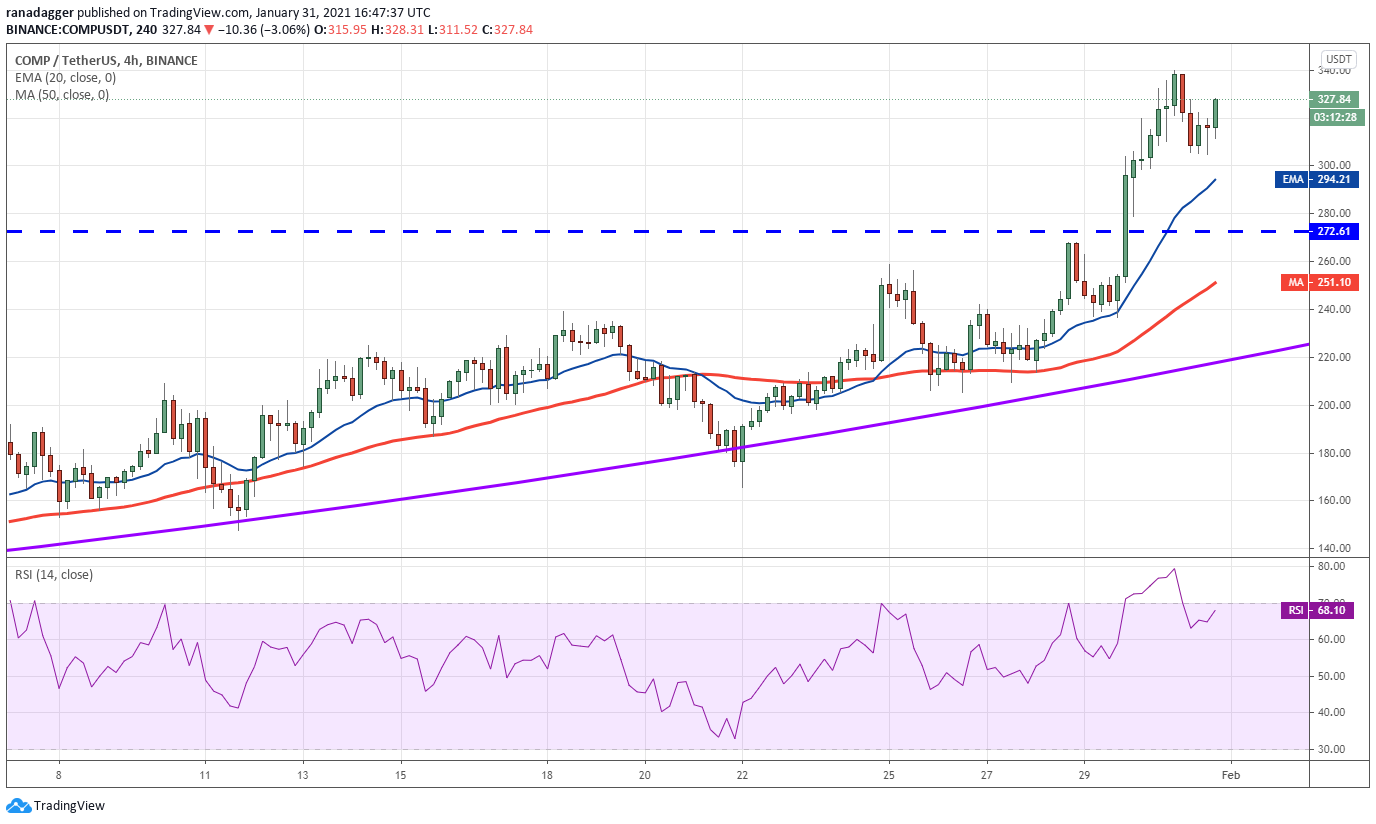 The 4-hour chart shows traders booked profits near $340 but the correction was short-lived as the price turned up from $304.84. If the bulls can now drive the price above $340, the pair may rally to $405.

On the other hand, if the price again turns down from $340, the pair may drop to the 20-EMA. If the price rebounds off this support, the bulls will again try to resume the up-move, but if the bears sink the pair below the 20-day EMA, a drop to $272.61 will be on the cards.