If Amazon jumps on the crypto bandwagon, it will immensely strengthen the possibility of cryptocurrencies going mainstream across the world. 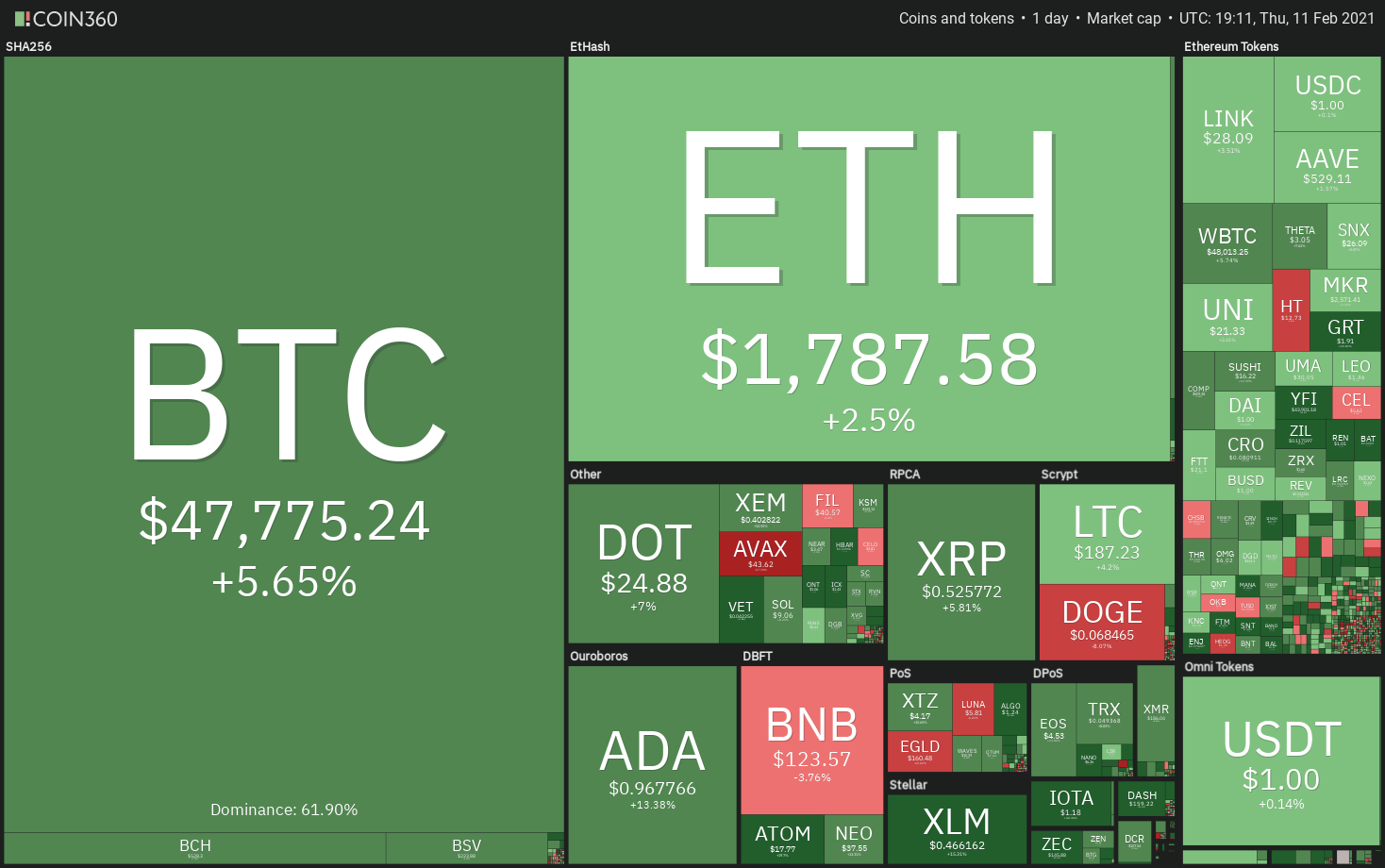 Today Bitcoin price is showing a new spark of optimism after the Bank of New York Mellon announced that it would hold, transfer and issue Bitcoin on part of its clients.  The bank is also said to be developing a platform that will process and custody digital currencies alongside traditional assets like treasuries and stocks.

Bitcoin’s future of becoming a widely accepted medium of exchange and investment vehicle appears to be becoming etched in stone. Meanwhile, several altcoins have been rising, buoyed by strong use cases and protocol upgrades.

Let’s analyze a few of the top performing tokens of this week.

Airdrops are an easy way to make some extra money, hence they remain extremely popular with investors. Qtum (QTUM) holders will receive an airdrop of Qi, the native cryptocurrency of the decentralized exchange QiSwap which is built on the Qtum blockchain. With crypto volumes rising and the demand for DEX’s picking up, the proposed airdrop scheduled from Feb. 14 may have attracted fresh buying from several investors.

The protocol has identified decentralized finance as a focus area and is taking steps to attract new DeFi projects. Qtum is planning a hard fork that will reduce its block spacing from 128 to 32 seconds in order to support the faster transaction speeds needed in DeFi.

Qtum is also developing Neutron, an agnostic interface that allows virtual machines to run on Qtum and other blockchains. The aim is to build a low-cost entry platform that is also easy to use. With an eye on DeFi, the Qtum protocol seems to be taking the necessary steps to attract projects and investors alike.

QTUM surged from an intraday low at $3.18 on Feb. 1 to an intraday high at $8.82 today, a 177% rally within two weeks. The breakout of $5.90 has completed a long-term bottoming formation, indicating the start of a new uptrend.

A long base readies a strong launchpad for the start of the next trending move. The longer the base, the stronger is the breakout from it. 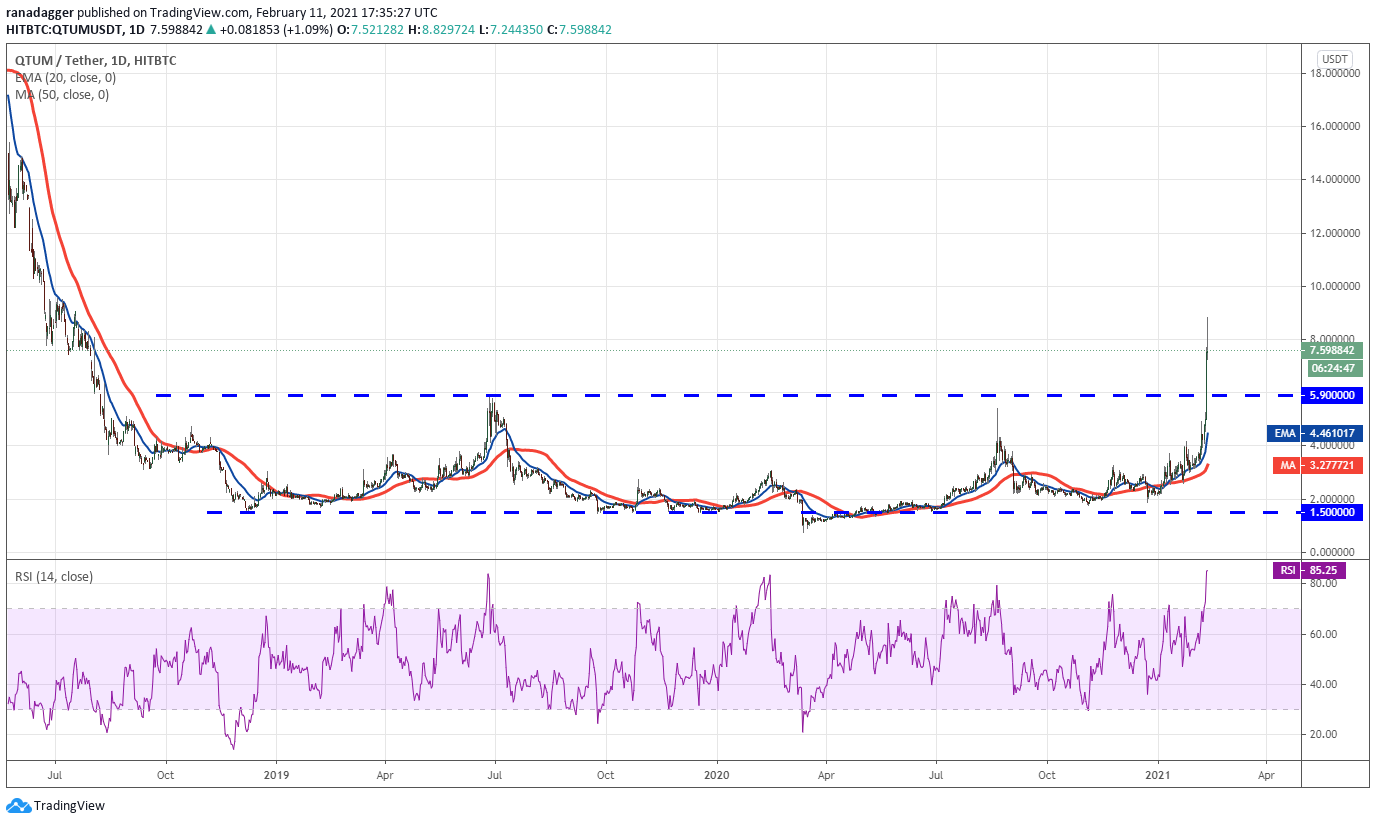 However, after the breakout from a long basing formation, the price retests the breakout level. The long wick on today’s candlestick suggests profit-booking at higher levels and the deeply overbought level on the relative strength index (RSI) also points to a possible correction.

The price may now dip back to $5.90. If the bulls can flip this previous resistance to support and the price rebounds off it sharply, it will increase the prospects of the resumption of the uptrend. The first target on the upside is $10.30 and then $14.7.

Contrary to this assumption, if the price drops and sustains below $5.90, it will suggest the current rally was a bull trap. The QTUM/USD pair could then dip to the 20-day moving average ($4.46).

The recently proposed changes in the WhatsApp privacy policy triggered outrage among users and resulted in millions of users switching to other messaging platforms. While a few users shifted to other centralized apps, others who wanted to keep their privacy in their hands opted for Status App.

This app has witnessed a sharp increase in the number of downloads on Android, which crossed above 600,000 recently. The latest update in Status allows users to bookmark their favorite DApps, enabling one-tap access to some of the popular DeFi projects.

Along with its features on mobile, Status Network (SNT) also rolled out Beta versions of its Desktop app that allow users to stay connected even from their laptops.

The Nimbus team also rolled out a new release that aims to increase sync speed by 50% while reducing CPU utilization by half and providing protection against accidental slashings. Nimbus will eventually be integrated into the Status-desktop and Status mobile app in order to improve the user experience.

SNT rose from $0.0465 on Feb. 1 to an intraday high at $0.1260 today, a 170% rally within two weeks. However, the long wick on the day’s candlestick suggests traders are booking profits at higher levels. 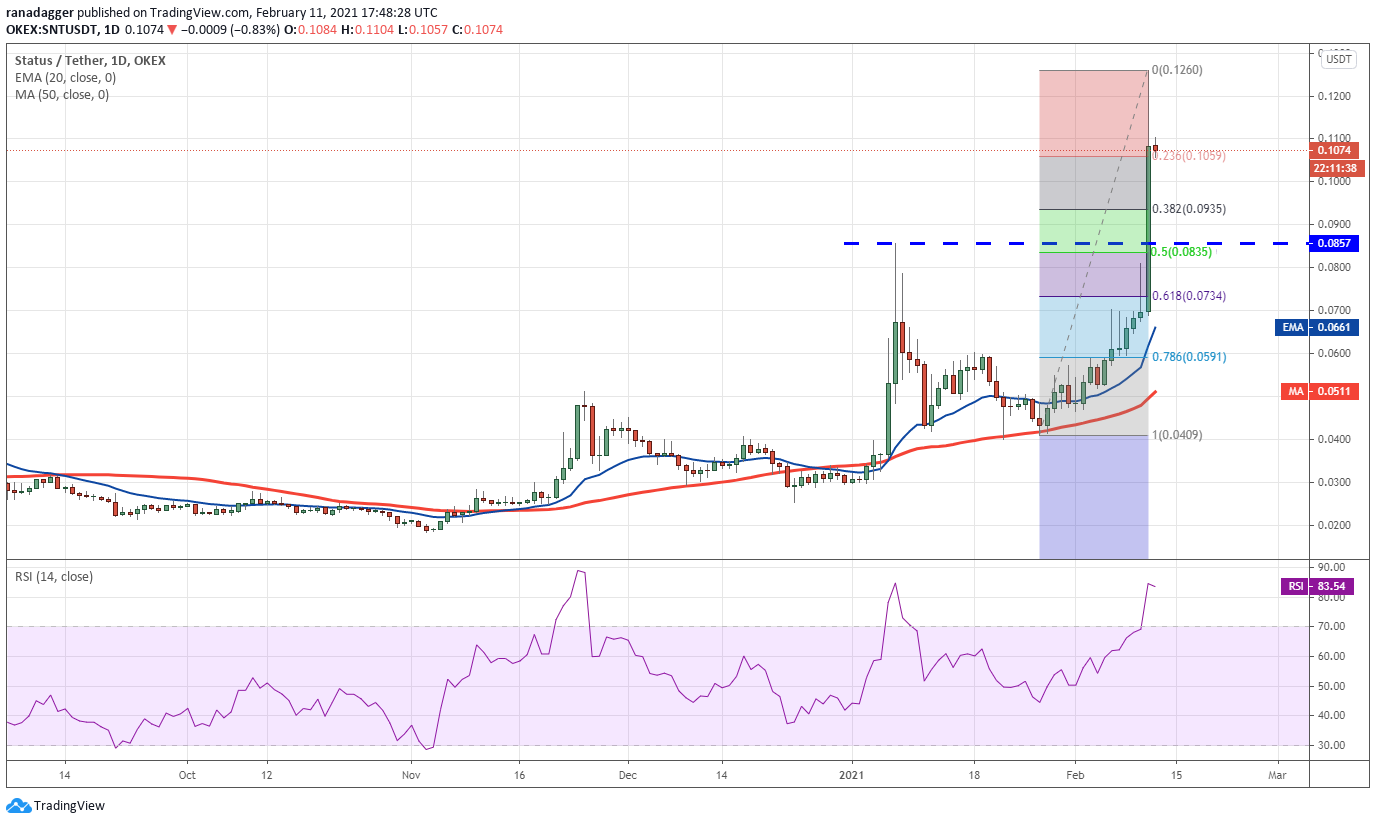 This bullish view will invalidate if the bears pull the price below $0.0835. Such a move will suggest that supply exceeds demand and that may result in a drop to the 20-day EMA ($0.066). A deep fall is likely to be followed by a range-bound action before the next trending move starts.

Modern technology relies on various data sources for taking automated decisions, hence the data should be trustworthy. To ensure this, Iota and Dell Technologies partnered on a demo project called Alvarium. The platform ensures that the data’s journey from initiation to its final destination is given a trust rating to increase the confidence in the data in a measurable way. This can have real-world use cases in industries that need a high degree of compliance and security.

Expanding its offering, Iota partnered with the South Korean Observer foundation and Tanglehub to apply for smart city projects in Asia and Europe in 2021.

Along with these new offerings, the protocol is also getting ready to launch the second part of its Chrysalis upgrade, which according to Iota is the most extensive in its history. With the launch of the new update, the community can build scalable Automated Market Makers, fee-free decentralized finance platforms, and smart contracts to leverage the protocol.

Chrysalis will also introduce steps needed for the removal of the coordinator and bring in a greater amount of decentralization. 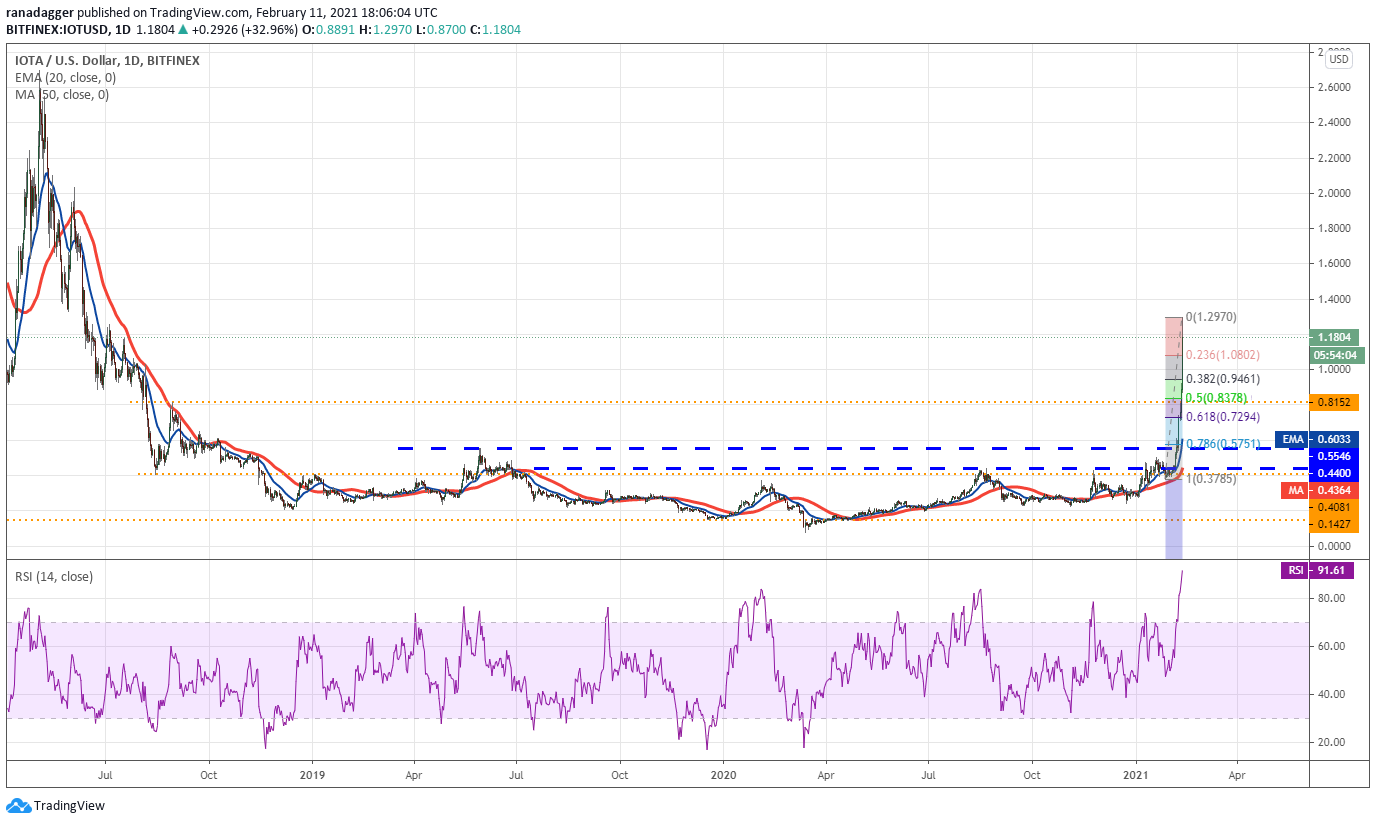 The sharp rally has pushed the RSI above 91, which suggests the rally is overextended in the short term and may witness a minor correction or consolidation. If the MIOTA/USD pair turns up from the 38.2% Fibonacci retracement level at $0.94, it will suggest strength.

The bulls will then try to resume the uptrend. If the buyers push the price above $1.29, the pair could extend its rally to $2.00 and then to $2.60. As the price has spent a long time in a basing pattern, the rally is likely to surprise to the upside.

Contrary to this assumption, if the price turns down from the current level and breaks below the 50% Fibonacci retracement level at $0.83, the pair may drop to the 61.8% retracement at $0.72. Such a deep fall will suggest the momentum has weakened.