Bitcoin (BTC) again rose to a new all-time high on Friday as bulls continued to buy on every minor dip. As the price reached a new high, Bitcoin’s market capitalization soared above $775 billion, taking it past Facebook’s market cap, according to the website Companies Market Cap. This means, there are only six companies in the world that currently have a greater market cap than Bitcoin. 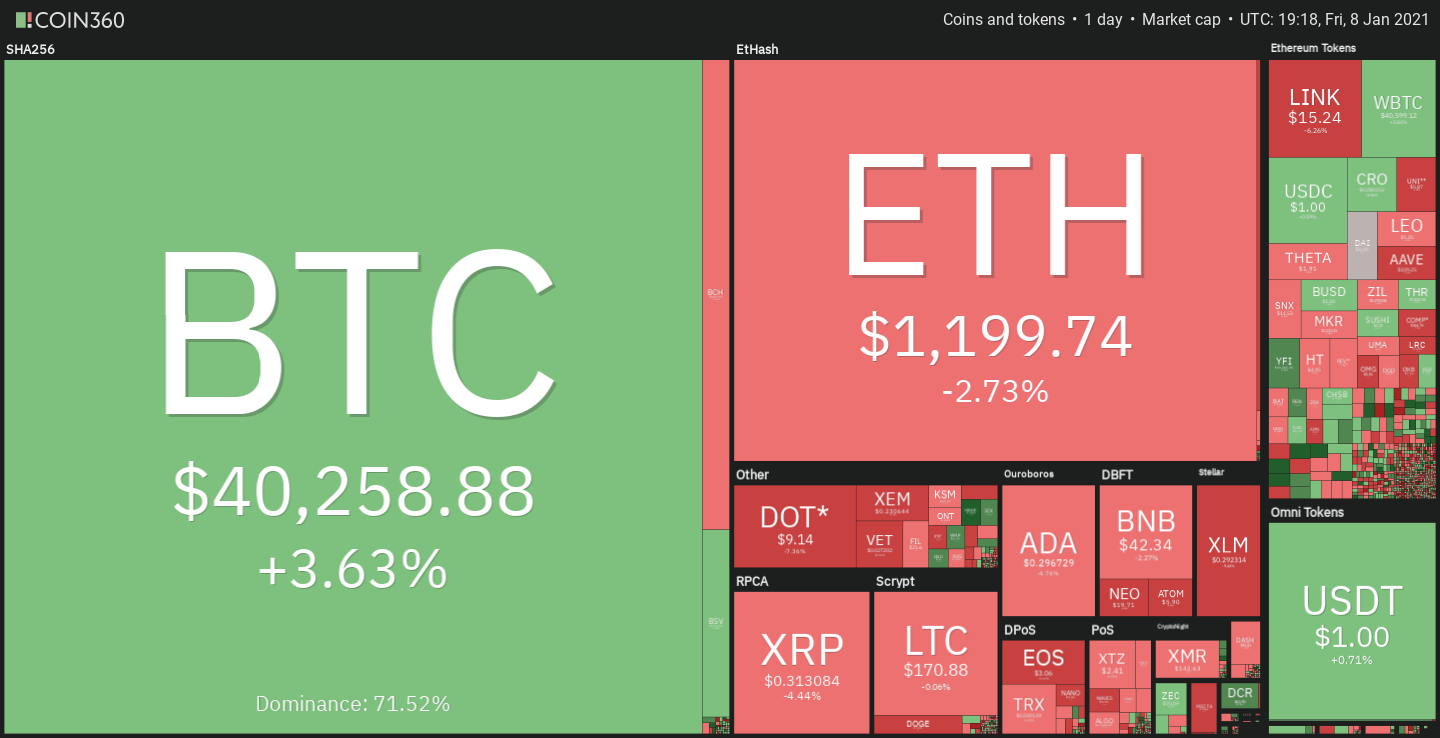 The bull market has attracted huge trading activity that has smashed all previous volume records. Along with the spot markets, Bitcoin futures trading volume has also surged, hitting over $97 billion in a 24-hour period, according to data from Skew.

Traders must keep in mind that when the market reverses course, there will be a lot of selling to deal with and that could result in a sharp correction. On the way to new all-time highs, the market did not stop at resistance levels and during the fall, these same support levels may prove useless. Therefore, traders must follow their money management principles and not be blinded by greed.

Let’s study the charts of the top-10 cryptocurrencies to spot any topping patterns or levels where the markets may reverse direction.

The long tail on today’s candlestick suggests that bears tried to start a pullback but the bulls thwarted their attempt and purchased the intraday dip. The trend has been so strong that there hasn’t been a consecutive three-day correction since Dec. 12. 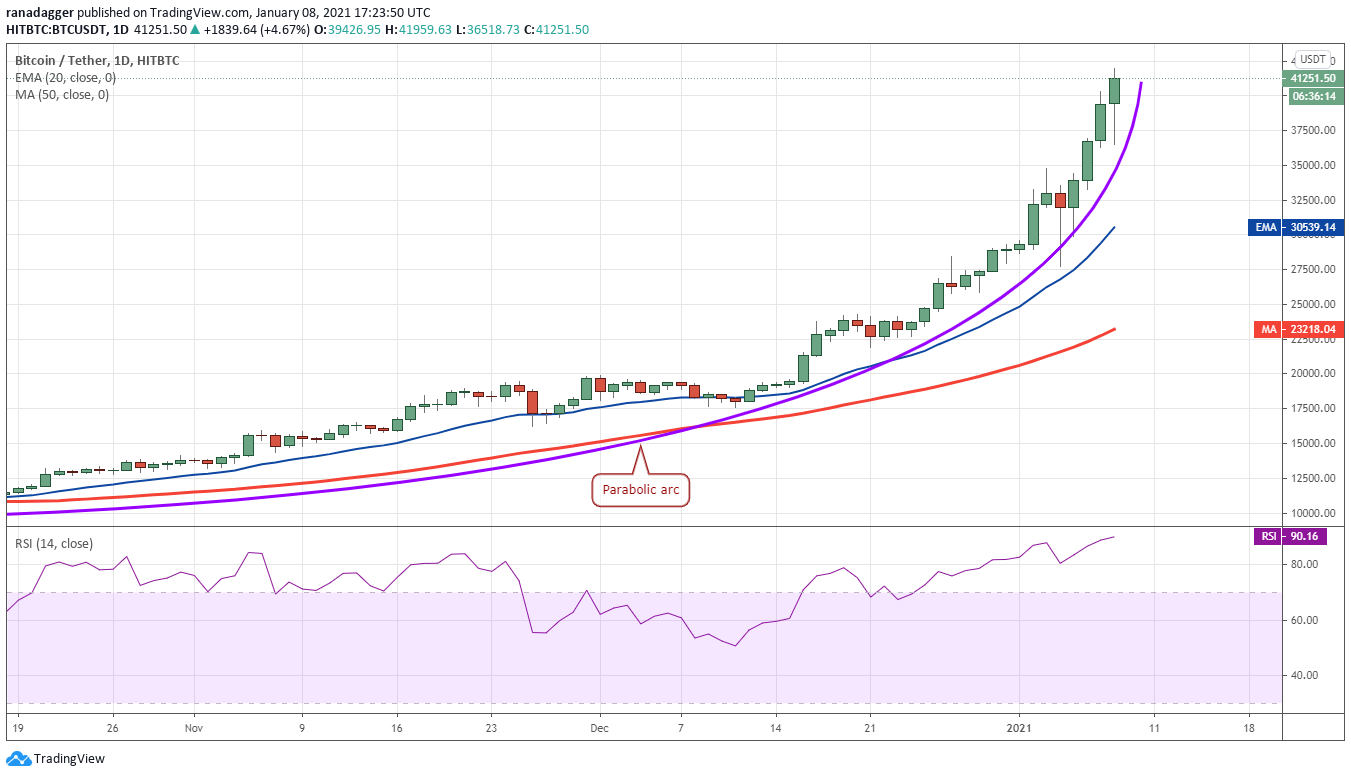 The vertical rally of the past few days has pushed the relative strength index (RSI) deep into the overbought territory but that has not lowered the demand from the bulls.

The BTC/USD pair could next rally to $45,000 and if that resistance is scaled, the uptrend could extend to $50,000. This psychological level could offer stiff resistance and that may result in a correction.

On the downside, the first support is the 20-day exponential moving average ($30,539). A strong rebound off this support will keep the uptrend intact.

Conversely, if the bears sink the price below the 20-day EMA, the decline could deepen with the next support at the 50-day simple moving average near $23,218.

Ether (ETH) made a long-legged Doji candlestick on Jan. 7, indicating indecision among the bulls and the bears about the next directional move. That uncertainty resolved to the downside today and the bears pulled the price down to $1,063.322. 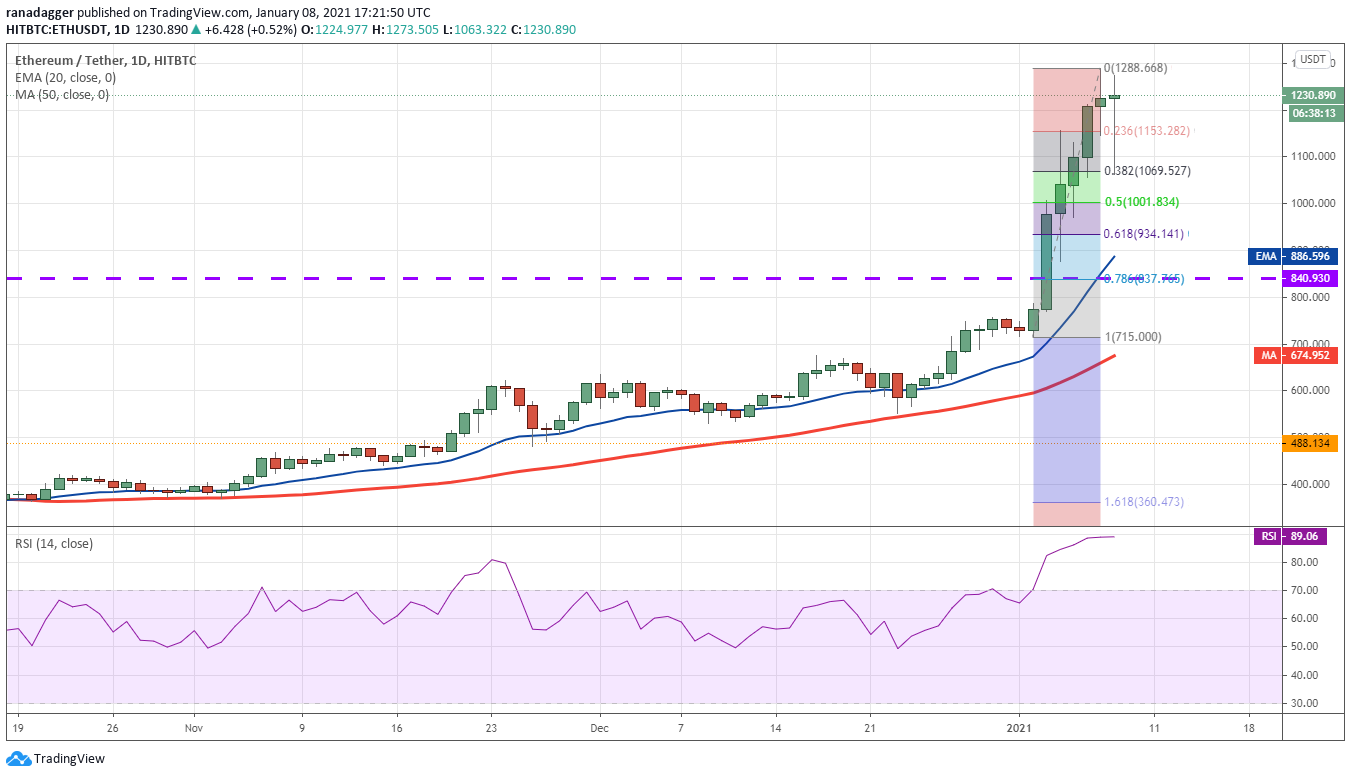 However, the bulls aggressively purchased the dip resulting in the formation of the long tail on the day’s candlestick.

XRP is the only major cryptocurrency that has not participated in the ongoing bull run. Traders sensed an opportunity and pushed the price above the 20-day EMA ($0.30) on Jan. 7, but selling near the 38.2% Fibonacci retracement level is preventing the price from pushing above $0.358202. 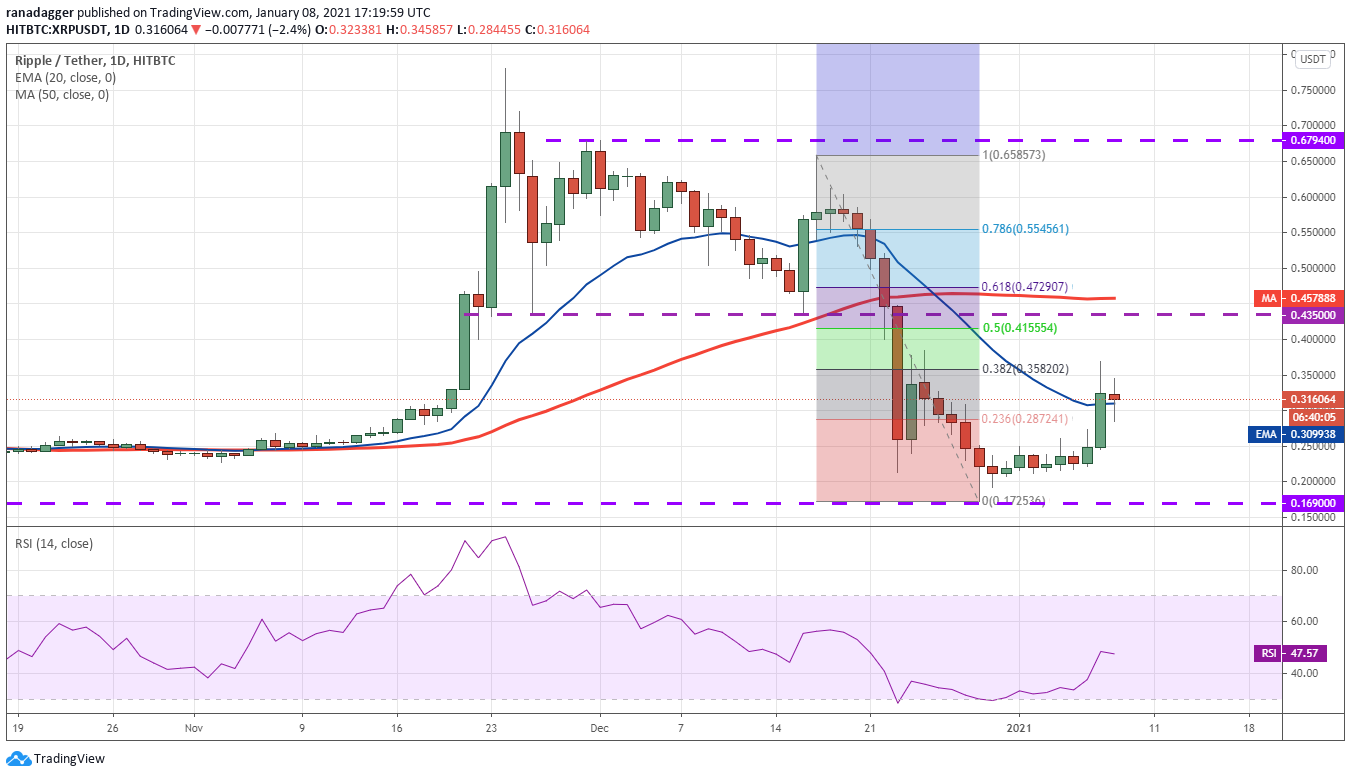 The bears are currently trying to sink the price below the 20-day EMA. This suggests that the sentiment on the XRP/USD pair remains negative, and traders are selling on rallies. The pair could now remain range-bound between $0.169 and $0.385.

Contrary to this assumption, if the bulls can push the price above $0.385, it will suggest that the downtrend is over. That may result in a rally to the 50-day SMA ($0.45).

Litecoin (LTC) formed a Doji candlestick pattern on Jan. 7, suggesting profit-booking by traders near the stiff overhead resistance at $180. The bears sensed an opportunity to stall the uptrend and attempted to trigger a correction today. 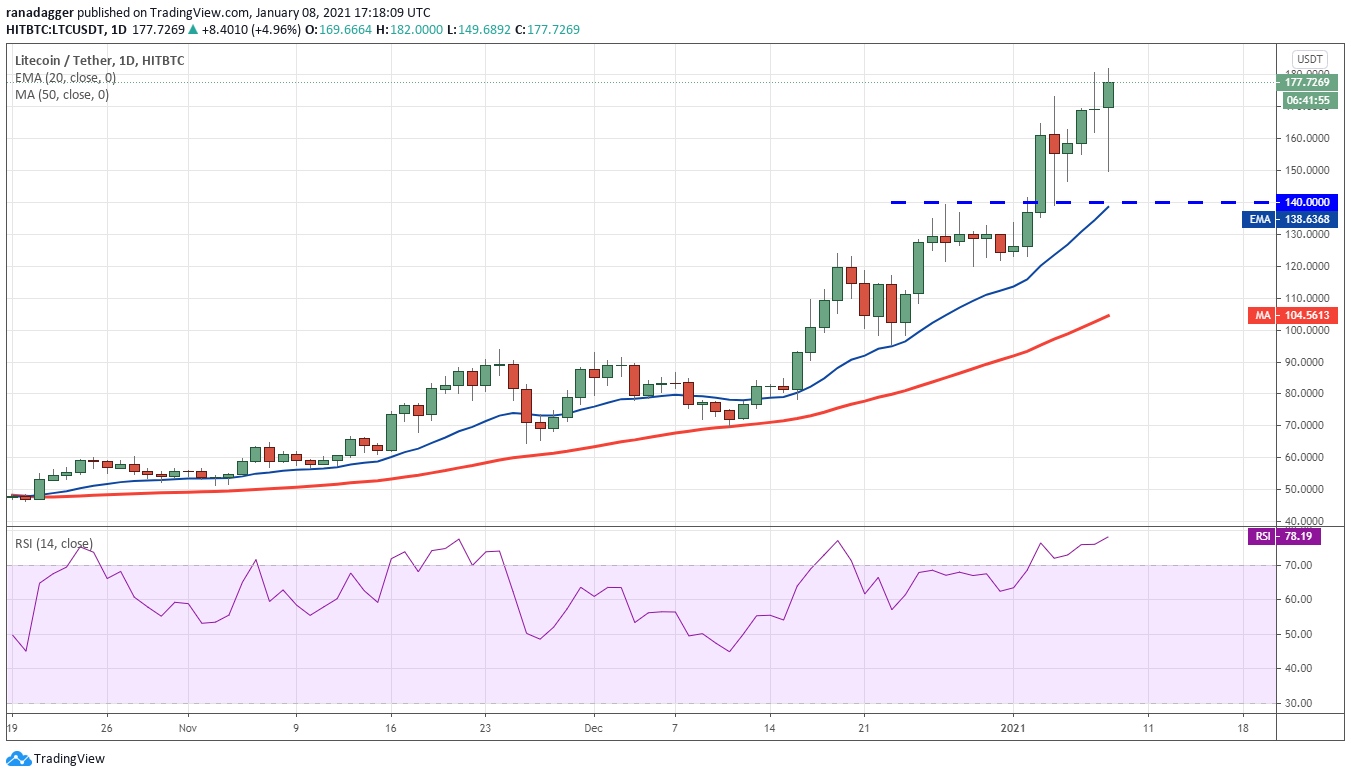 However, the bulls are in no mood to relent and they aggressively purchased the dip today, as seen from the long tail on the candlestick. If the LTC/USD pair climbs above the stiff overhead resistance at $180, the LTC/USD pair could rally to $200.

The RSI remains in the overbought territory, suggesting that the bears may again try to raise a roadblock at $180. If the price turns down from this resistance, the pair could drop to the 20-day EMA ($138).

A strong rebound off the 20-day EMA will suggest that the trend remains bullish, but a break below it will increase the possibility of a deeper correction.

The bulls attempted to extend the uptrend on Jan. 7, but the bears aggressively sold above $0.340. Cardano (ADA) corrected to the 50% Fibonacci retracement level at $0.2614241 today, where buying emerged. 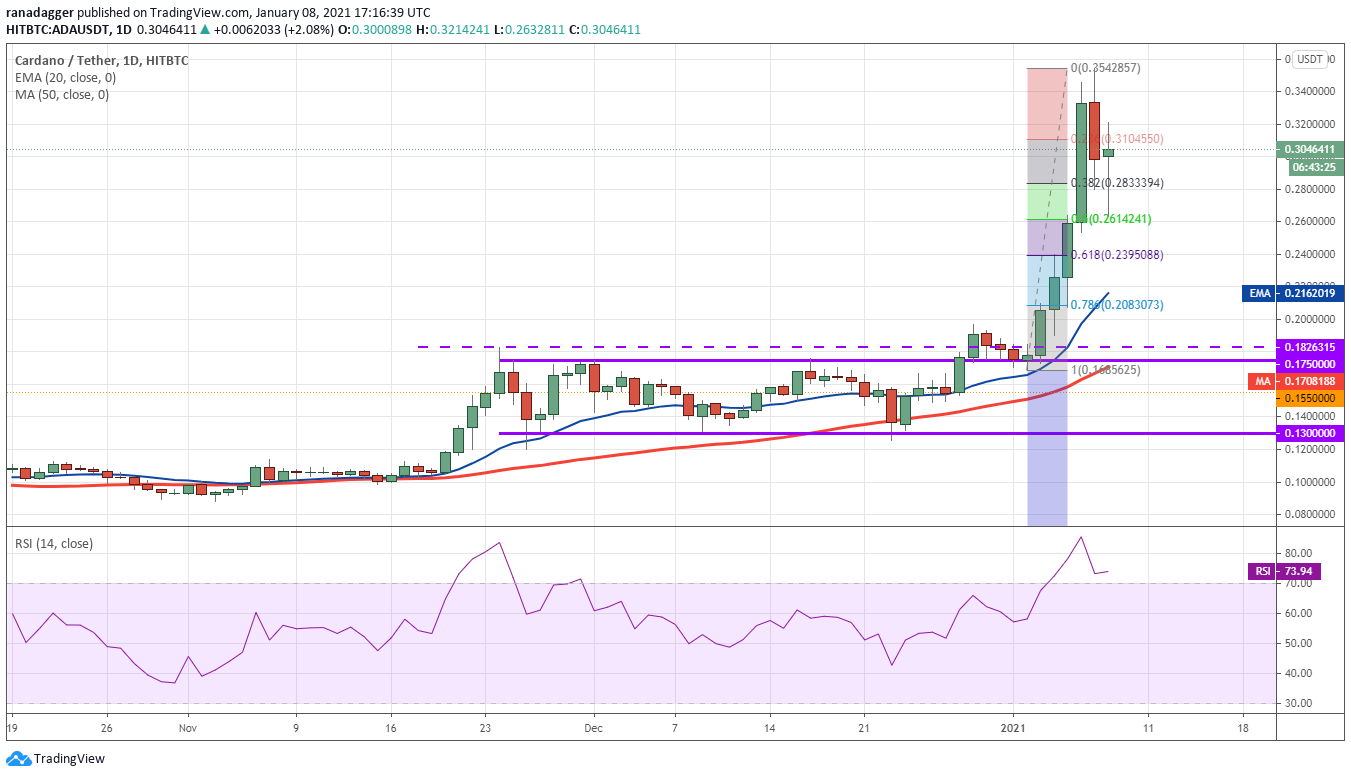 The long tail on today’s candlestick shows that traders are using the dips to accumulate as the sentiment remains bullish. If the bulls can thrust the price above the overhead resistance, the ADA/USD may resume the uptrend and rally to $0.40 and then to $0.50.

Polkadot (DOT) attempted to resume the uptrend on Jan. 7, but traders booked profits at higher levels. The bears tried to start a correction, but the altcoin bounced off $8.7788 today, from just above the 38.2% Fibonacci retracement level at $8.5515. 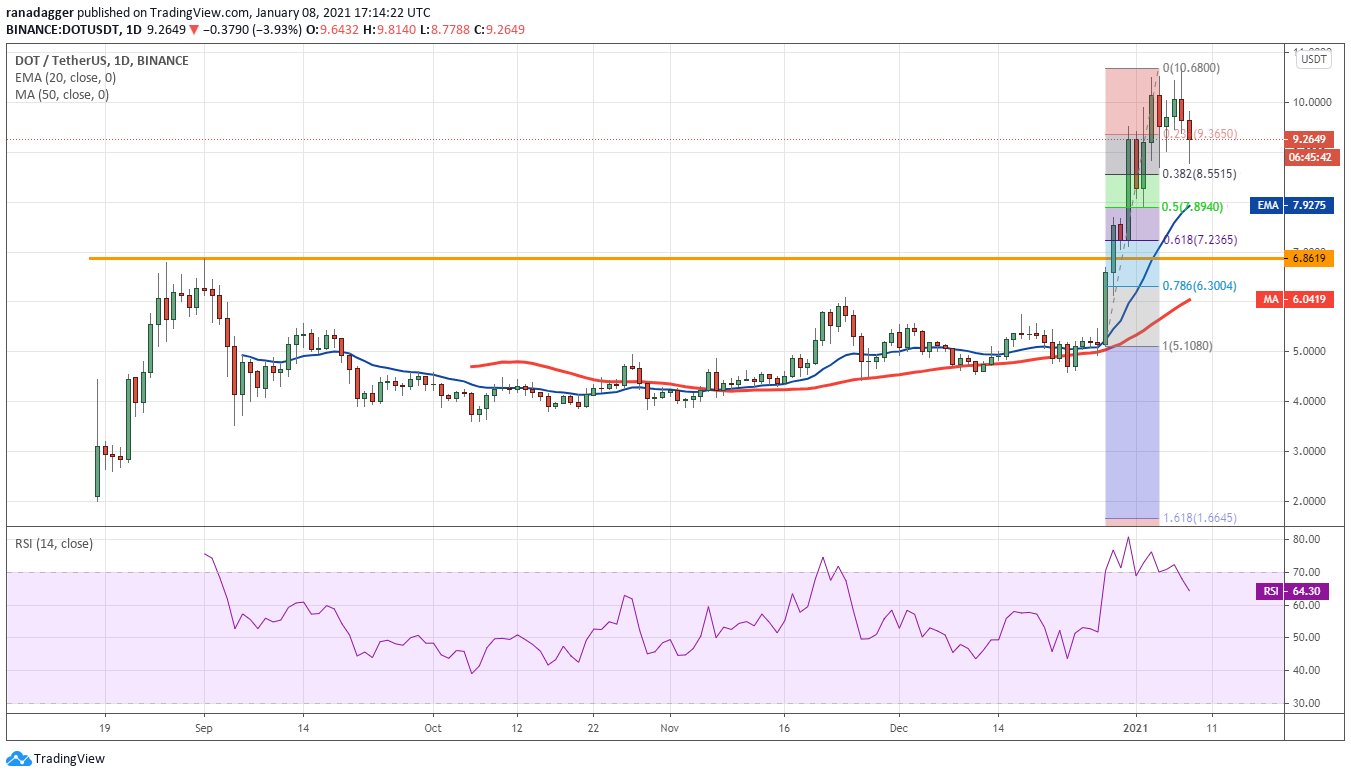 The rising moving averages and the RSI in the positive territory suggest an advantage to the bulls. The DOT/USD pair may again rise to $10.68. If the bulls can thrust the price above this resistance, the uptrend may resume with the next target objective at $12.39 and then $15.

However, if the pair turns down from the overhead resistance, that could result in a few days of consolidation. A break below $8.5515 and the 20-day EMA ($7.92) may indicate the start of a deeper correction.

Bitcoin Cash (BCH) formed a long-legged Doji candlestick pattern on Jan. 7, indicating indecision among the bulls and the bears about the next directional move. The bears pulled the price down today, but they could not sustain the lower levels, as seen from the long tail on the day’s candlestick. 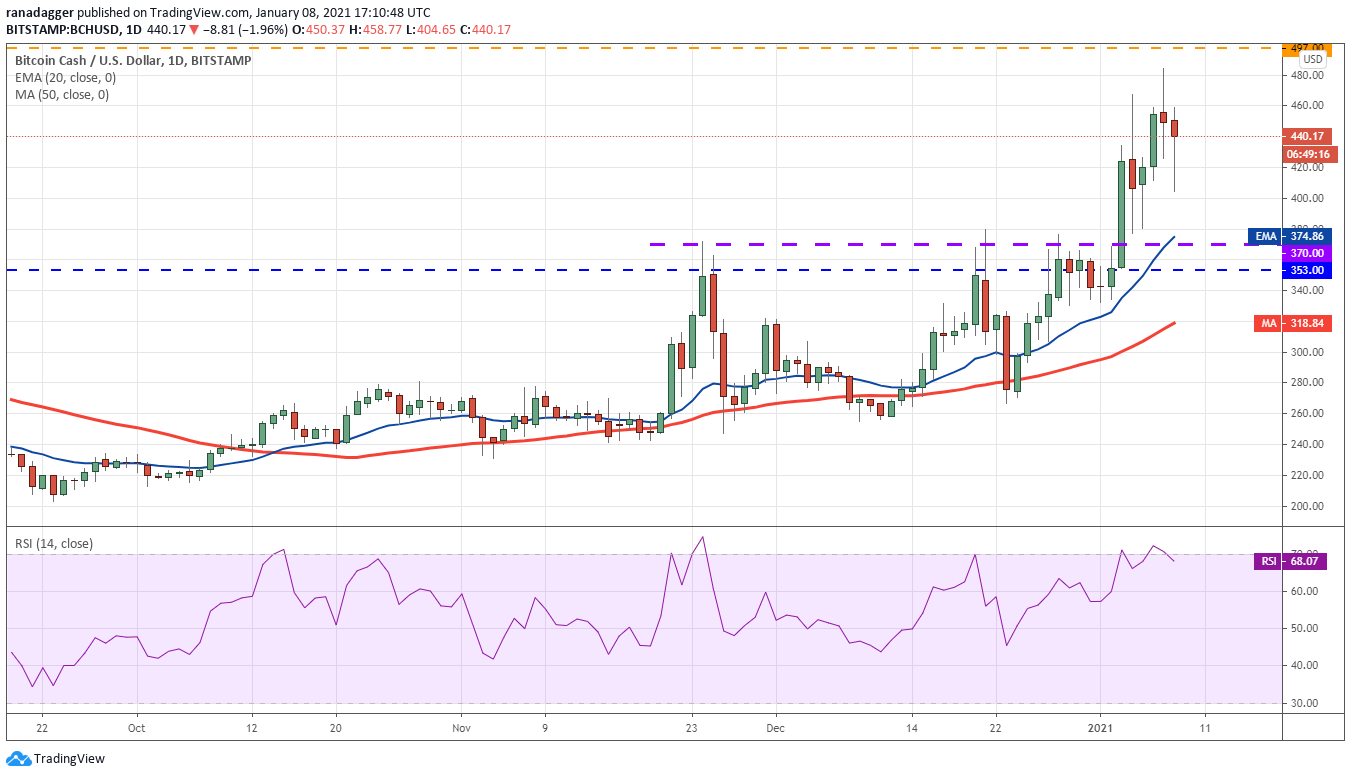 If the price again turns down from the $497 to $515.35 overhead resistance zone, it will suggest traders are booking profits at higher levels. That could keep the BCH/USD pair range-bound between $370 and $500 for a few more days.

However, the upsloping moving averages and the RSI near the overbought zone suggest bulls are in command. If they can push the price above the resistance zone, the pair may start a new uptrend with the first target at $640.

The long wick on the Jan. 6 and 7 candlestick shows that traders booked profits at higher levels. However, the bulls continue to buy at lower levels, as seen from Stellar Lumens’ (XLM) bounce off the 50% Fibonacci retracement level at $0.266547 today. 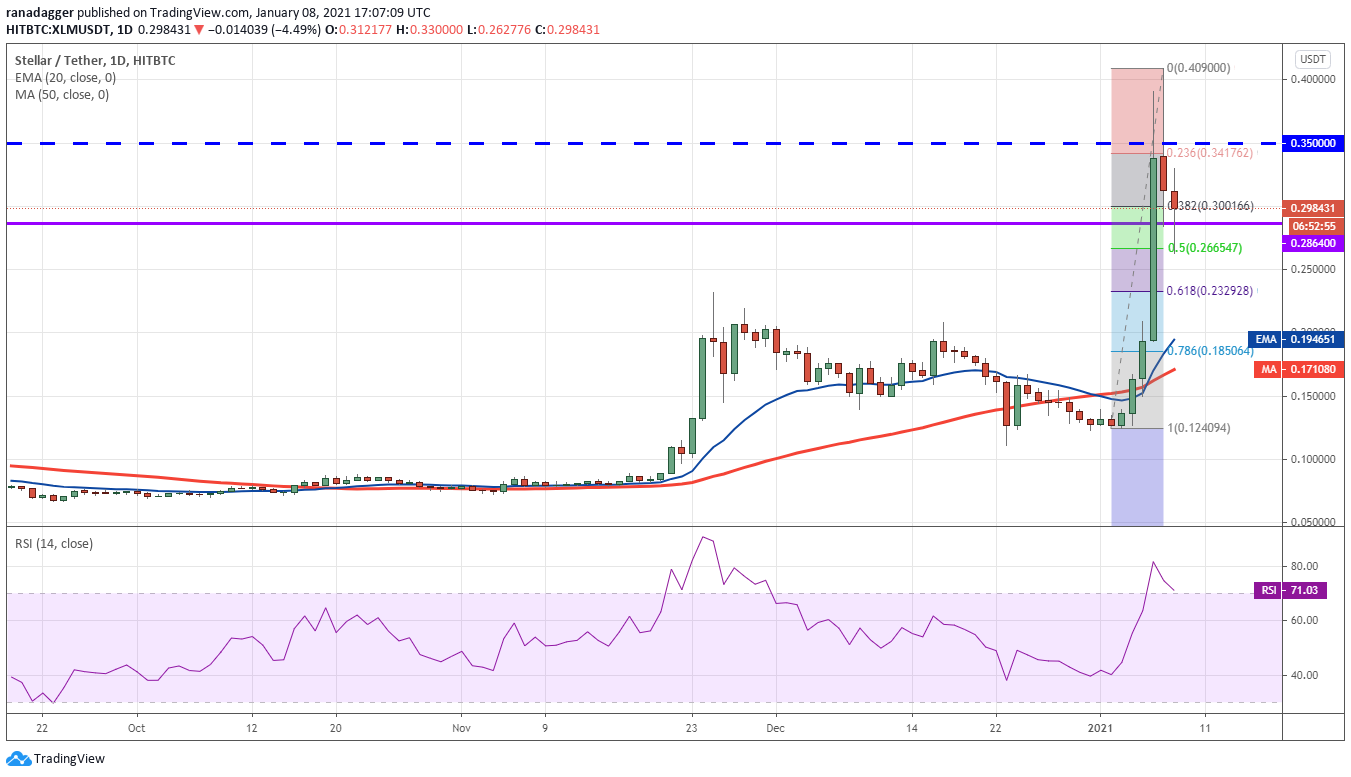 After the large range days of the past few days, the XLM/USD pair may enter a few days of consolidation as traders digest the recent gains and decide on the next course of action.

Chainlink (LINK) turned down from the $17.7777 overhead resistance on Jan. 7, and that attracted profit-booking by short-term traders who dragged the price down to the 20-day EMA ($13.54) today. 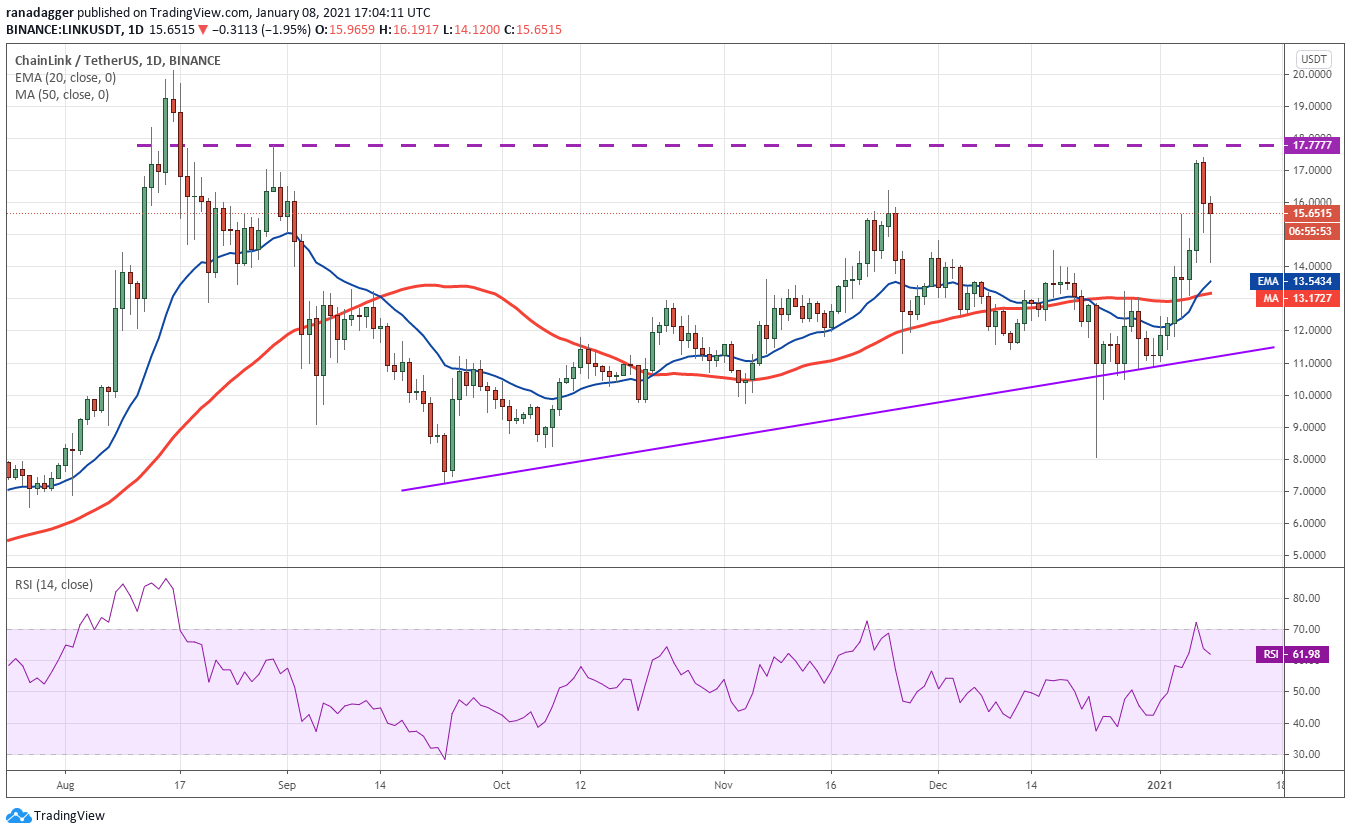 The upsloping 20-day EMA and the RSI in the positive zone suggest bulls have the upper hand. Thus, traders used the dip to aggressively buy at lower levels, resulting in a long tail on today’s candlestick.

However, if the bears successfully defend the overhead resistance once again, then the pair may consolidate between $14 and $17.7777 for a few days. A break below the moving averages will signal that bears are back in the game.

The candlesticks of the past few days show long tails, which indicate traders have been booking profits at regular intervals. Although dip buyers have continued to push Binance Coin (BNB) higher, the up-move lacks conviction. 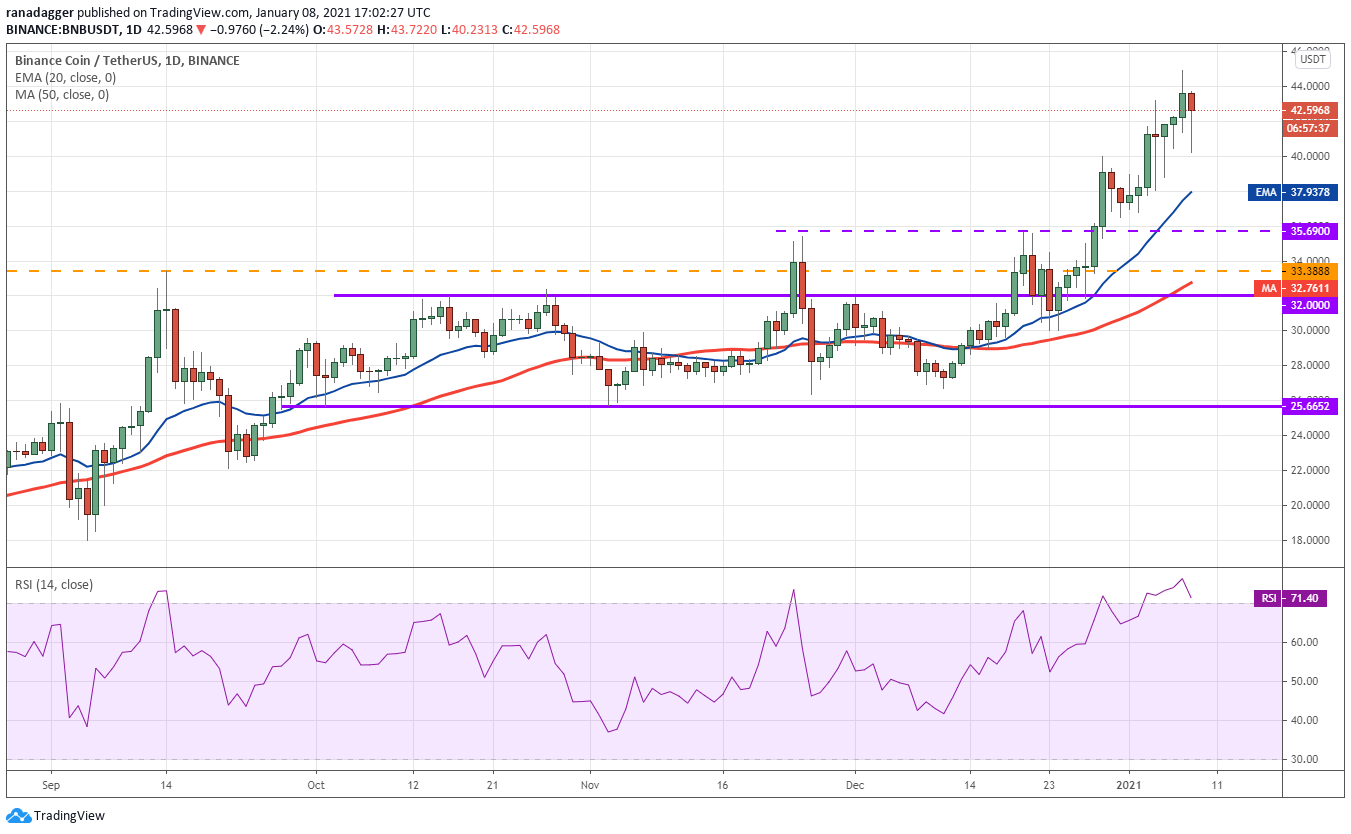 If the momentum does not pick up within the next few days, the BNB/USD pair will be at risk of a correction or consolidation. A break below the 20-day EMA ($37.93) will be the first sign of a possible deeper correction.

Contrary to this assumption, if the bulls can drive the price above $45, the pair could rally to $50, where the bears may try to stall the uptrend.