Dogecoin (DOGE) is up 80% in a day and trading volume has spiked more than 800% as the altcoin sees a publicity surge with a familiar source. 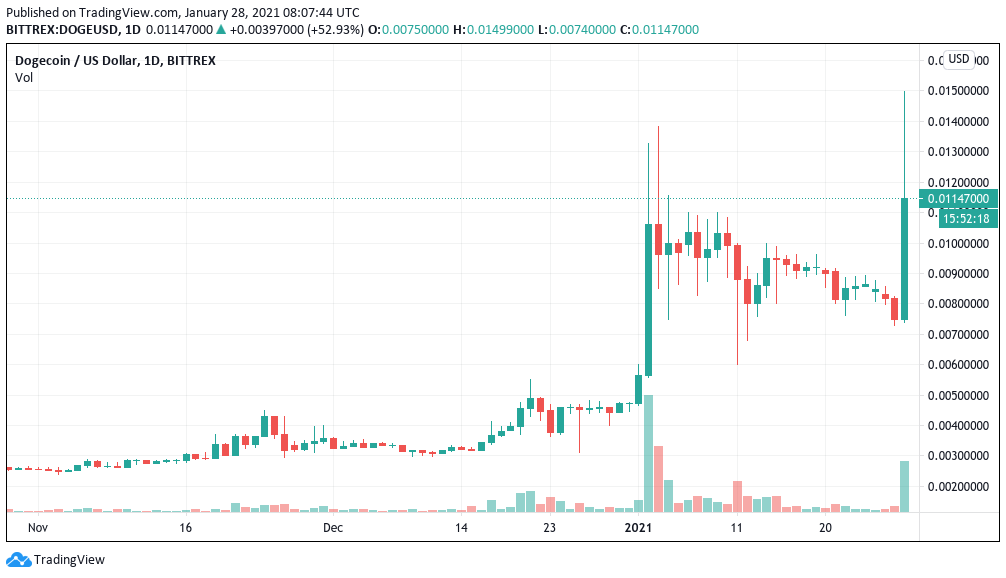 Data from Cointelegraph Markets, CoinMarketCap and Tradingview showed a transformation taking place in the DOGE ecosystem overnight on Jan. 27, with DOGE/USD hitting $0.0138.

In a matter of hours on Thursday, the pair added over 80% to its spot price before correcting, still holding 1 cent support at the time of writing.

The gains accompanied a similar surge in interest on social media, with Twitter activity up by more than 300%. The source, it appears, is the same Reddit group that sparked a dramatic but highly controversial bull run in the stock price of U.S. consumer electronics firm GameStop.

“Has Doge ever been to a dollar?”

Subsequently, the hashtags #dogecoin and #dogecoininto1dollar began trending among users in the United States, referencing a long-held dream among the altcoin’s investors.

Dogecoin already has something in common with $GME, both assets having seen publicity tweets from Tesla CEO and world’s richest man, Elon Musk in recent weeks. As Cointelegraph reported, Musk’s tongue-in-cheek endorsement of DOGE was enough to induce serious price action.

On Reddit itself, users attempted to insert hints to invest in the meme-based altcoin, despite dedicated posts being removed by r/Wallstreetbets moderators.

As the fear of repercussions mounts over GameStop’s performance, meanwhile, cryptocurrency proponents argue that Reddit users combining forces to outpace unprepared institutions are simply playing by the rules of capitalism.

“I know this GameStop stuff is funny, but you have to remember this is hurting real people who own multiple boats,” Kevin Farzad, a member of music group Sure Sure, added.