Bitcoin (BTC) whale cluster data shows that $44,214 is the key near term level that the dominant cryptocurrency needs to defend.

As Cointelegraph reported, in the last 24 hours, Bitcoin saw a sell-off after reaching a new all-time high at around $48,000, with the price shedding almost 8% and dropping to as low as $43,750 on Binance.

Why is this level important for more BTC upside?

Whale clusters form when whales or high-net-worth investors purchase Bitcoin at a certain price level and do not move them.

These levels often act as support or resistance levels because whales are more likely to buy more BTC at the level they are holding from or sell at breakeven. 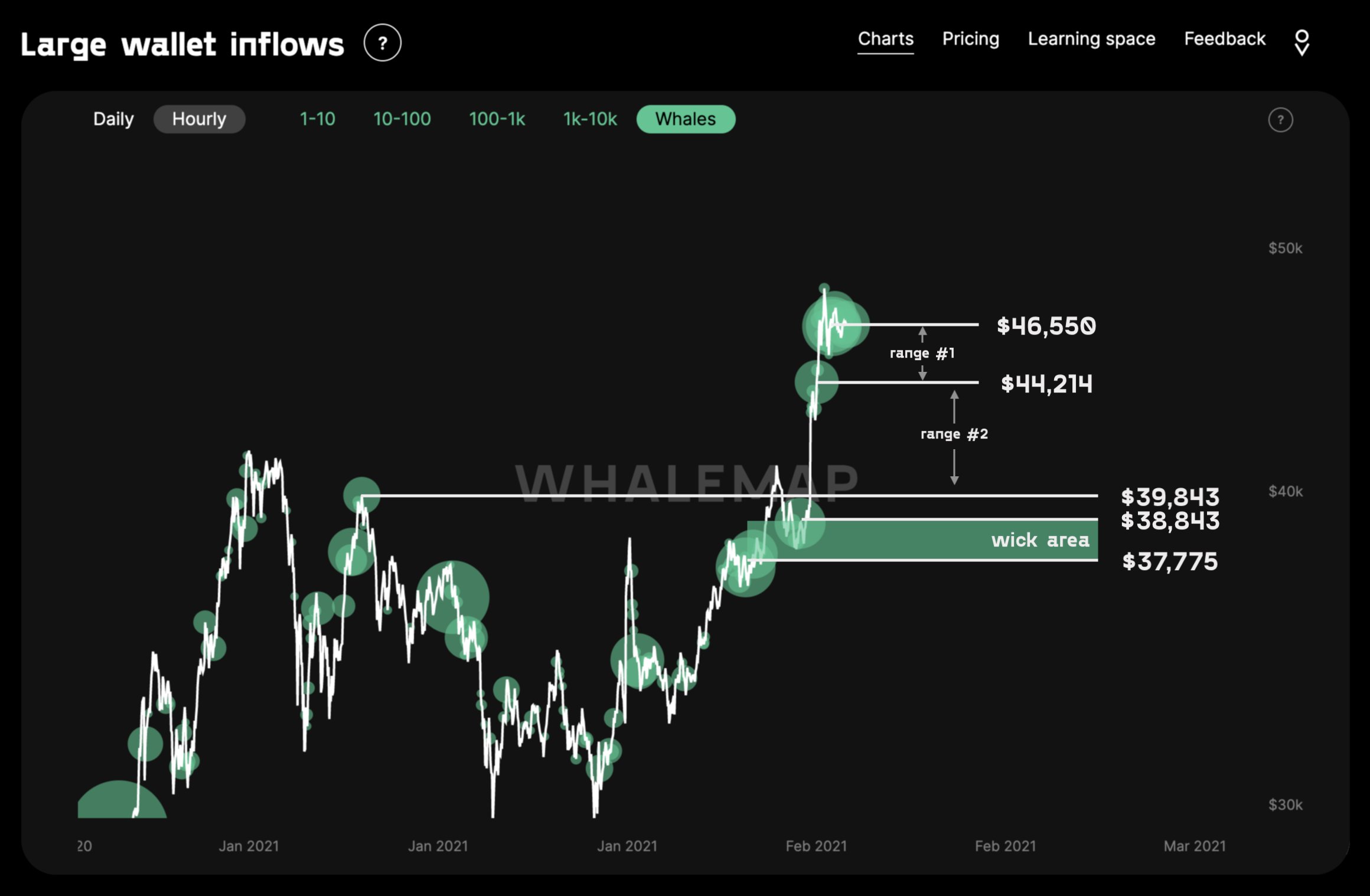 Analysts at Whalemap said that losing the $44,214 support level would likely result in a drop to $39,843 in the short term.

But, if the level holds, then it would mean that it has become a new support area following the rally driven by Tesla purchasing $1.5 billion worth of BTC. The analysts said:

“Losing $44214 should open the door for BTC to visit $39843 as there are not many supports in between. For the time being though, $44214 should provide some support. There is also great demand at 38k prices so BTC should not be falling below that.”

There are several arguments to support a near term bullish trajectory for Bitcoin. First, according to the researchers at Santiment, the number of active Bitcoin addresses and the exchange supply of Stablecoins are high.

The combination of these two metrics suggest an overall healthy uptrend for Bitcoin backed by strong fundamentals. They wrote:

“Both #Bitcoin’s active addresses and the exchange supply of #stablecoins like $USDT are remaining high, which is an encouraging sign that $BTC can rebound after today’s mild retrace.”

Additionally, the number of non-zero Bitcoin addresses is also at record highs, suggesting that an influx of new buyers is rushing into BTC.

Atop the favorable technical and fundamental factors, Kyle Davies, the co-founder at Three Arrows Capital, said the cryptocurrency market is witnessing mass adoption.

In recent months, the Bitcoin market has seen a massive increase in the inflow of public companies and institutional investors.

Through various investment vehicles, such as the Grayscale Bitcoin Trust and Coinbase Custody, institutional investors have been buying large amounts of Bitcoin.

Davies said that the “new paradigm of decentralized money” has awaken, adding:

“We are witnessing mass adoption, right here right now. Stalwarts of the old world will convert, the crypto native will flourish. Awaken new paradigm of decentralized money. Don’t be scared.”

Meanwhile, the crypto market is seeing a perfect storm of technical and fundamental factors supplemented by a compelling macro narrative, which is causing the value of both major cryptocurrencies and DeFi tokens to rally.

In the foreseeable future, based on the market structure of Bitcoin, a continuation of the rally is generally expected, given that the $44,214 whale cluster level does not break.