Bitcoin (BTC) has had a stellar 2020, but how are other top crypto assets faring? Let’s take a look at how some of the top cryptocurrencies by market capitalization performed this .

Within 12 months, the price of Bitcoin rose by 290%, outperforming all major stock indices and most stocks, apart from a select few including Tesla (TSLA).

The main catalysts behind Bitcoin’s rally have been the increase in institutional demand, favorable financial conditions as a result of central bank liquidity injections, and the decline of the U.S. dollar. 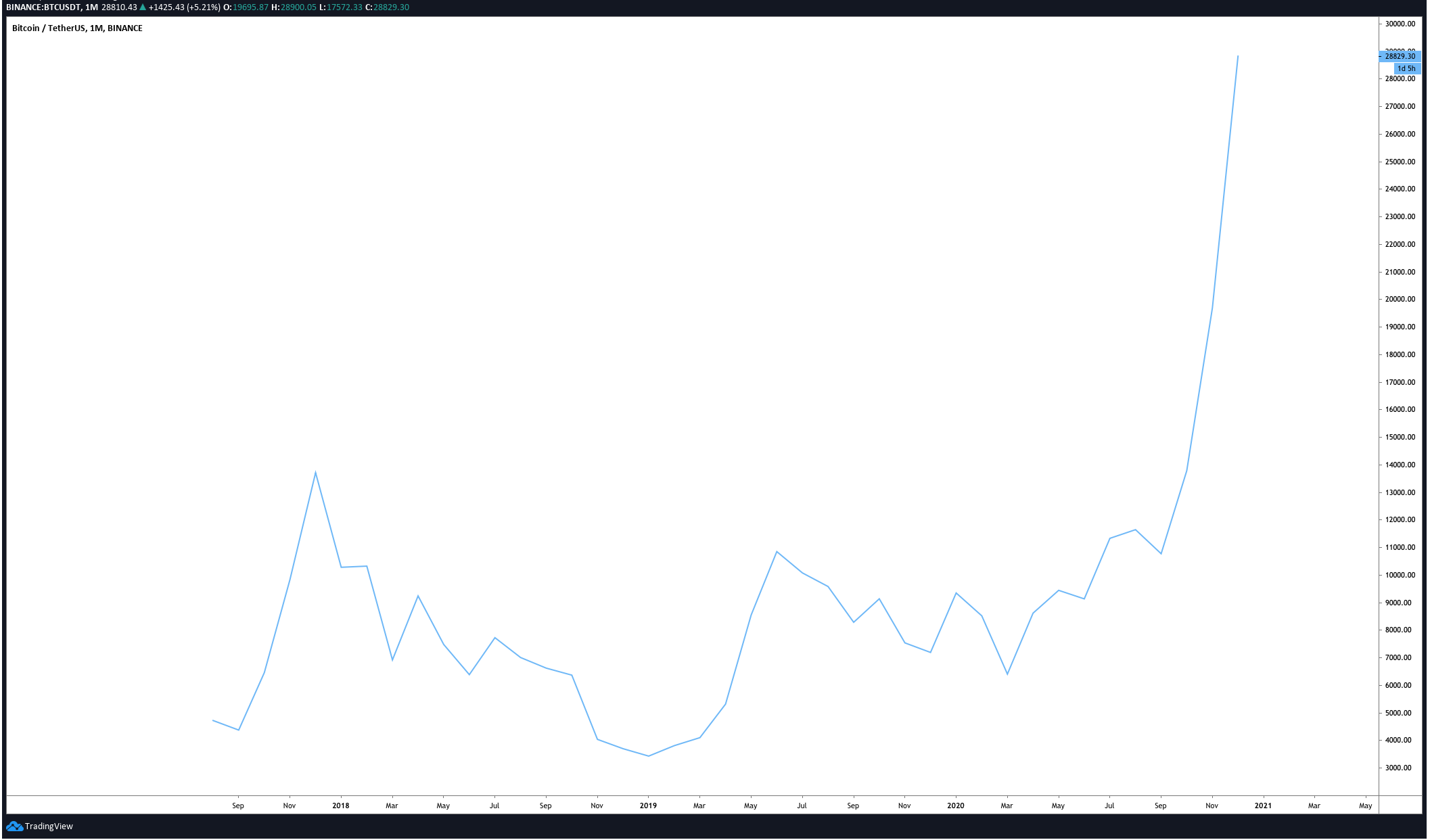 The combination of the three macro factors fueled Bitcoin’s momentum in October. Eventually, as major institution-focused platforms including CME and Grayscale saw a large spike in volume and inflows, accelerating Bitcoin’s rally.

Ether (ETH) price performed strongly throughout 2020, despite its recent stagnant phase against Bitcoin.

The primary driver of Ether’s rally throughout November was the release of Eth2. After reaching a threshold of over 400,000 ETH in deposits, Eth2 commenced.

In year-to-date performance, most of the old school altcoins (the one’s from 2017 and earlier), including XRP, Cadano (ADA), and Stellar (XLM), lagged behind Bitcoin pr.

Out of the original altcoins, XRP initially performed particularly well in November as Bitcoin rallied towards its all-time high.

Polkadot, Chainlink, EOS, and Tezos have also rallied since the beginning of the year. The four smart contract-related cryptocurrencies each saw considerable catalysts for short-term rallies when BTC rallied towards $20,000. 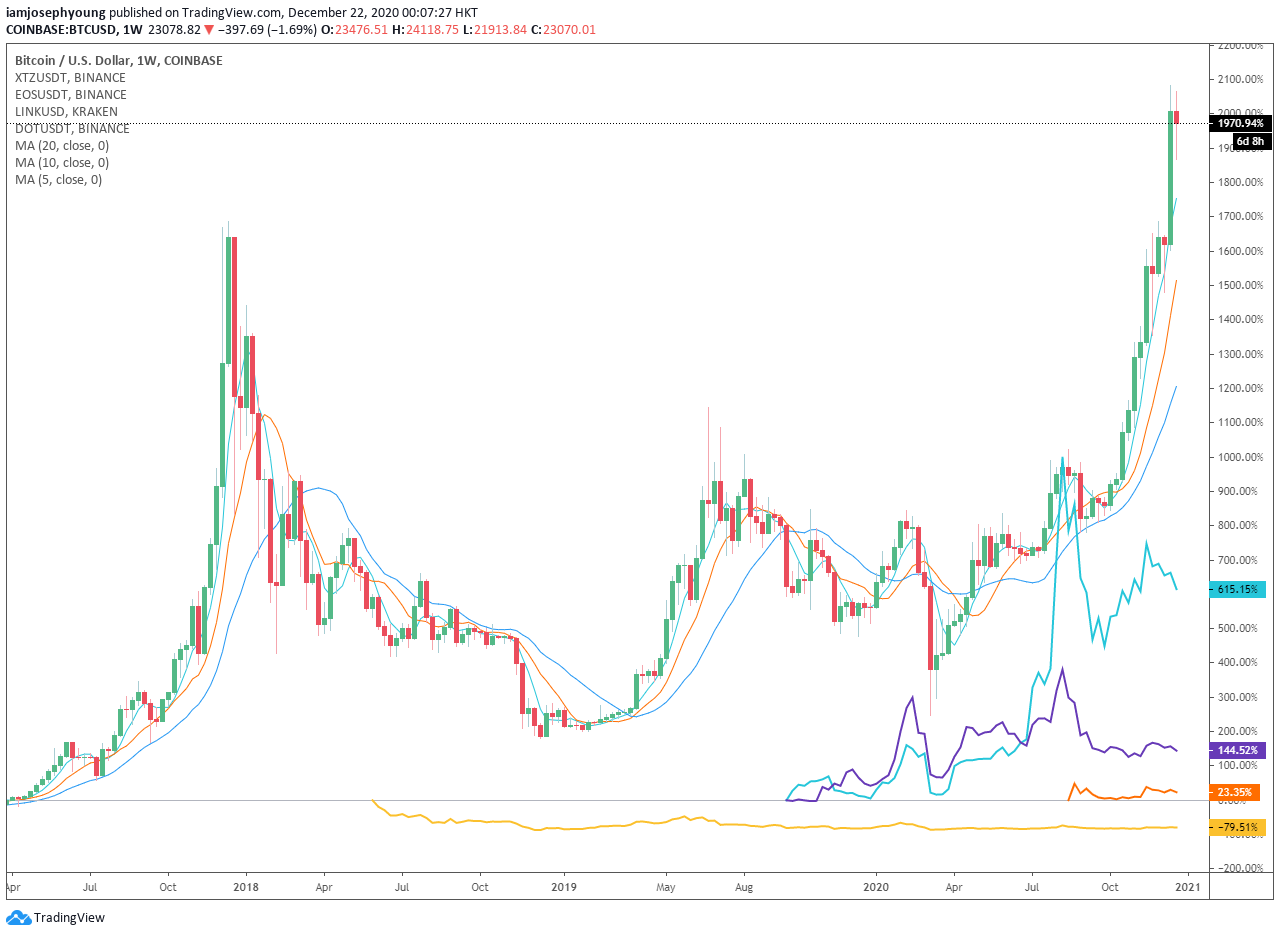 For instance, Chainlink benefited from the explosive growth of the decentralized finance (DeFi) space. Chainlink is an oracle-focued blockchain network and the objective of an oracle is to feed data to DeFi protocols.

As such, as the total value locked in DeFi reached $16 billion, Chainlink rallied and so did many other DeFi-linked tokens.

Despite various respective catalysts, Polkadot, EOS, Tezos, and Chainlink lagged behind Bitcoin in year-to-date gains. The main reason behind the muted price action was Bitcoin’s meteoric rally post-$20,000, which caused altcoins to pull back.

Specialized tokens, such as Wrapped Bitcoin, USDC, and Tether also saw significant growth in terms of market cap. These tokens are mainly utilized on DeFi protocols and the rapid increase in user activity made each token endemic to the DeFi ecosystem.

Tether has just surpassed a $20B market capitalization!

This fantastic milestone is another confirmation for Tether maintaining its number one spot as the most liquid, stable and trusted currency! pic.twitter.com/sorWjzChIo

Tether, in particular, saw a rapid increase in market capitalization in the fourth quarter of 2020. As Cointelegraph reported, Tether, the most used stablecoin in the cryptocurrency market, surpassed $20 billion in valuation.