Bitcoin (BTC) fell below $26,000 on Dec. 29 as fresh fallout from Ripple’s threatened U.S. lawsuit was felt throughout crypto markets.

$27,000 support failed to hold overnight, sparking a retest of lower levels which now center on $26,000. At the weekend, Bitcoin hit all-time highs of $28,400 before swiftly reversing. 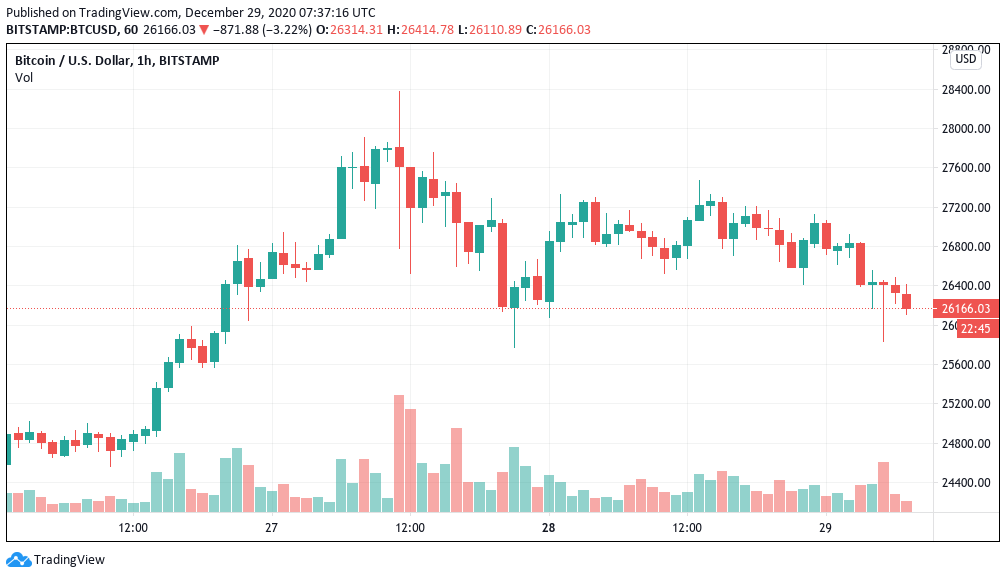 The latest losses come as XRP, the fourth-largest cryptocurrency by market cap, hits $0.23 thanks to major U.S. exchange Coinbase opting to suspend trading from next month. The reason is a lawsuit from the U.S. Securities and Exchange Commission (SEC), which threatens to classify XRP as an unlicensed security and make trading it all but impossible.

“There is going to be a rangebound construction, after which 2021 will most likely break out again,” Cointelegraph Markets analyst Michaël van de Poppe summarized about Bitcoin’s short-term perspectives in a video update on Monday.

Van de Poppe is eyeing altcoins as next in line to see major gains. XRP notwithstanding, the market is already showing signs of life, with Ether (ETH) climbing above $700 for the first time since May 2018 this week.

Another winner on Tuesday was Polkadot (DOT), now the seventh-largest token by market cap, which saw a 22.5% daily rise, capping weekly performance of nearly 34%.

He additionally pointed to a likely top in Bitcoin market cap dominance, which at almost 70% should soon give way to altcoin presence. December tends to see BTC dominance peaks, with 2017, the time of Bitcoin’s first attempt to crack $20,000, a notable comparison.