This analysis brought to you by RoboForex

Bitcoin managed to test $24,300 within the frameworks of a Triangle pattern materialization in the daily chart. One should note that ершу growth started after a test of the fast Moving Average: right now. the price is pretty far away from this line. Such behavior may indicate an attempt to start another decline and test the fast Moving Average before a new rising wave. The closest support, from which the price rebounded to the upside, is at $21,735 but the fast Moving Average is below it so far. If bulls are able to keep the asset at the current levels, the Moving Average will go higher and there won’t be a deeper correction.

However, traders are not confused by the correction and many of them are still pretty active in buying the cryptocurrency every time its rate goes down a little bit. For example, Michael Saylor, the head of MicroStrategy, announced another purchase of Bitcoin for the total amount of $650 million because last weekend its price moved away from the highs. At the moment this review is published, BTC is testing $22,247.

Moreover, Saylor offered Elon Musk to follow in his footsteps and convert some part of Tesla in Bitcoins and said that he could motivate other companies included in the S&P 500 index to do the same. Needless to say, that such purchases will lead to further Bitcoin growth. Responding to that, Musk asked whether such big transactions were possible. Saylor’s answer was affirmative – he had already purchased bitcoin for the total amount of $1.3 trillion and was ready to discuss details in private. However, in the past Musk was pretty skeptical about Bitcoin, saying that it was similar to fiat money.

In the nearest future, the United States Securities and Exchange Commission is planning to accuse Ripple of issuing unregistered securities – that’s how the regulator calls XRP tokens. Many analysts already called it an attack against the entire cryptocurrency industry. In this light, Ripple has already broken an important support area at $0.4500 and continues falling. On the other hand, it was mentioned that Joe Biden’s presidential executive office may be more friendly towards the digital asset sector that the government of the day. 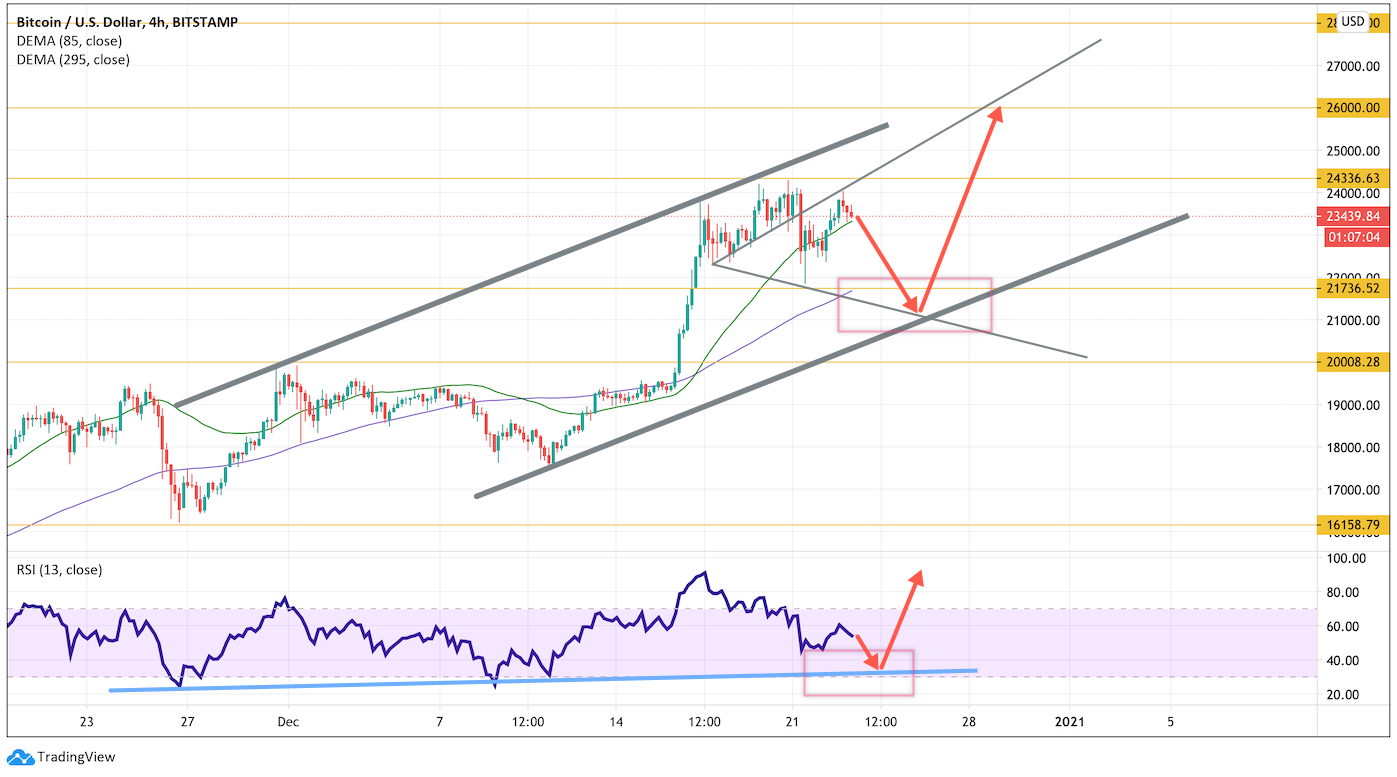 From the technical point of view, the H4 chart a potential formation of an ascending “Wolfe Wave” pattern. To complete the pattern, the asset must update the local low and test $21,000. After that, the price may continue moving upwards within the frameworks of the pattern materialization. A good signal in favor of this idea is a rebound from the rising channel’s downside border. Another signal to confirm this scenario will be a decline of the RSI indicator below 30 – earlier, it forced two significant rebounds to the upside. If the price falls lower than $20,000, the instrument may start a deeper correction.

© 2020 CryptoDaily All Rights Reserved. This article is provided for informational purposes only. It is not offered or intended to be used as legal, tax, investment, financial, or other advice.