ATOM, the native cryptocurrency of the Cosmos blockchain protocol, has rallied by over 100% in the past week.

Analysts are attributing the rally of ATOM to two major fundamental factors. First, in recent weeks, layer one blockchain protocols, like Avalanche (AVAX) and Polkadot (DOT) have gone through a major rerating.

Second, the utility of ATOM that enables holders of the cryptocurrency to earn through swap, gas, and transaction fees could make it more compelling for investors. 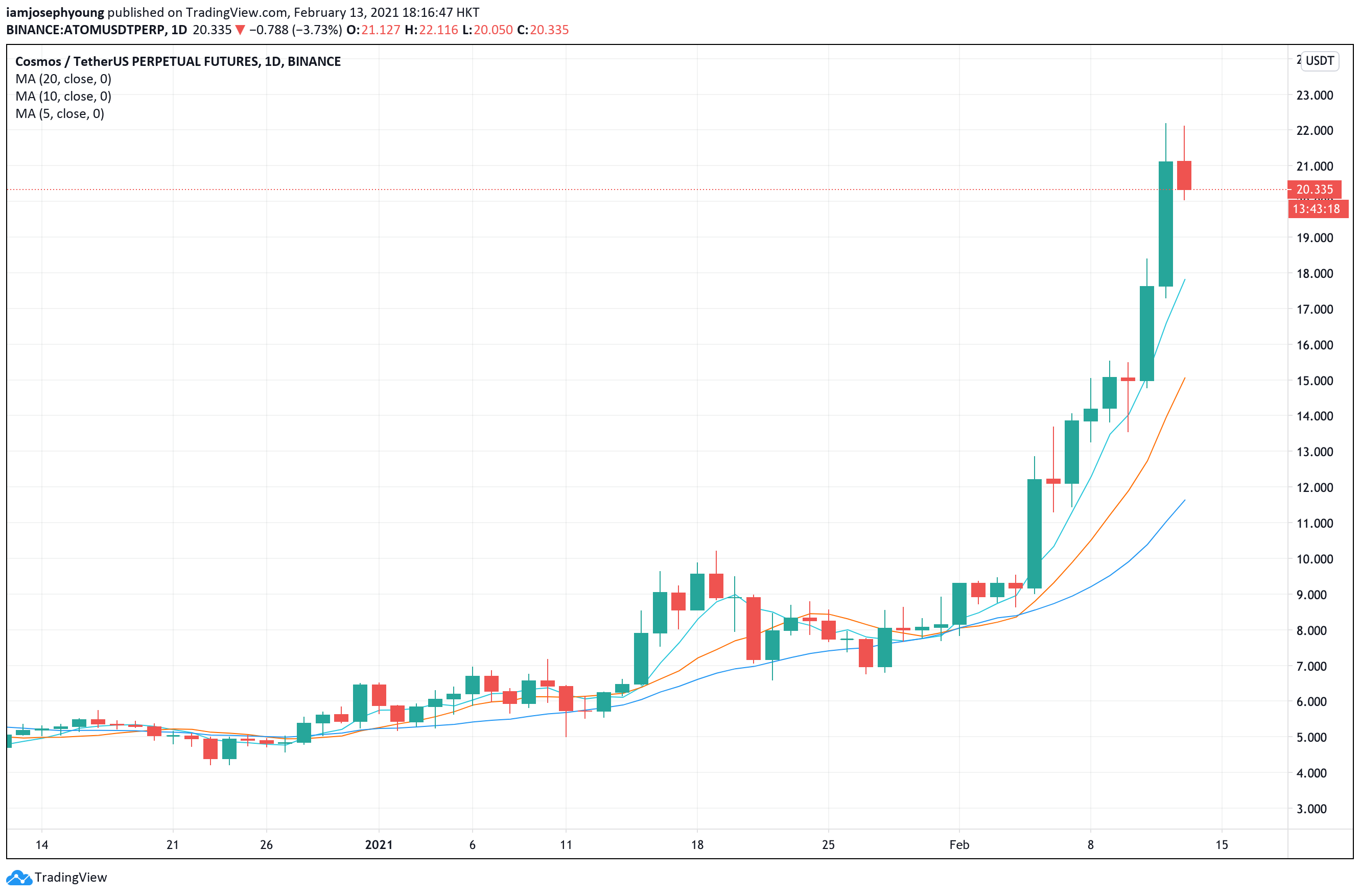 The rerating of layer-one blockchains

The term rerating is used in the cryptocurrency market to describe when the value of a cryptocurrency rises rapidly after stagnating for a prolonged period.

Typically, rerating occurs when the market finds that a cryptocurrency is undervalued due to fundamental reasons or a certain catalyst buoys the potential of the blockchain protocol.

Cosmos is primed for a rerating because other layer-one blockchain protocols, like Polkadot, have seen massive rallies throughout January and February.

Currently, as of Feb. 13, the valuation of Cosmos hovers at around $5 billion. In comparison, Polkadot’s valuation is at around $27 billion, more than five times higher.

More importantly, compared to other layer one blockchain protocols, Cosmos has major decentralized platforms and blockchain projects launched on top of it.

Projects on top of Cosmos valued higher than ATOM

Most notably, Terra and Binance Smart Chain are both based on the Cosmos blockchain. The valuation of the two blockchain projects alone are above $22 billion.

Technically, BNB is the native token of both Binance Smart Chain and the Binance ecosystem, but nonetheless, the valuation of the two projects alone surpass that of Cosmos.

A pseudonymous DeFi investor known as “SpiderCrypto” said ATOM is undervalued compared to other blockchains. The investor said:

“Also @cosmos $ATOM is undervalued relative to other blockchains. So many great projects using tendermint / cosmos and you don’t even know anon. $10b marketcap and will explode like $avax.”

A pseudonymous Cosmos validator Immasssi also emphasized that the tokenomics of ATOM, which allows users to benefit from the fees generated from the Cosmos ecosystem, makes ATOM more attractive.

Similar to DeFi projects that have cash flow and a token that lets users earn through staking, the validator said ATOM holders will earn transaction fees from packets routed through the Cosmos hub. He said:

“$ATOM holders will earn tx fees for packets that are routed through the hub. This includes all #data. Additionally atom holders will earn swap fees, gas fees & tx fees from the upcoming AMM. Furthermore earning from shared security. Once you realize what that means for ATOM.”

Additionally, the long-term sentiment score for ATOM has risen significantly this year alongside Terra LUNA’s, suggesting that the rerating of Cosmos may continue, particularly if the DeFi sector continues to grow.