The euphoria in the cryptocurrency market was quelled on Jan.11 as the majority of altcoins saw their prices decline by more than 20% as Bitcoin price sold off sharply.

After falling below the $40,000 support level on Jan. 10, selling pressure for Bitcoin (BTC) increased overnight and pushed the price of the top cryptocurrency as low as $30,229 before a soft support level was reached.

The rapid decline in price led to more than $2.7 billion worth of futures contracts being liquidated and the long candles on the Bitcoin price chart show that the cascade of liquidations occurred quickly as the price dropped from $41,000 to $32,229. 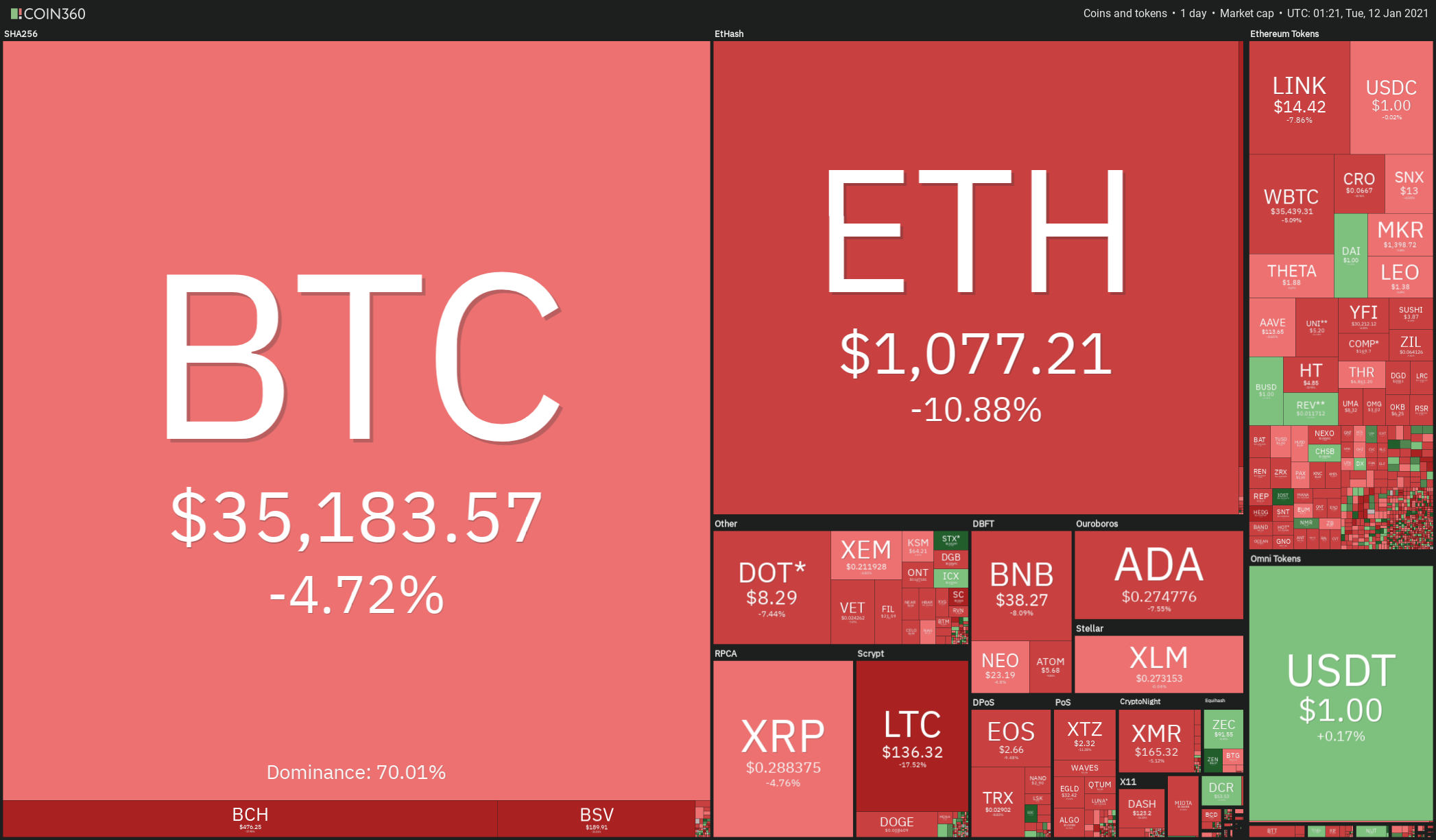 Dallas Mavericks owner Mark Cuban used the market downturn as no opportunity to point out that the cryptocurrency market is identical to the internet stock bubble from the 1990s.

Cuban said that “Watching the cryptos trade, it’s exaclty like the internet stock bubble,” but he added that Bitcoin, Ether, and “a few others” will likely follow the path of Amazon and eBay and continue to see their valuations rise.

Those with a little more skin in the game, such as Celsius CEO Alex Mashinsky, view the recent drop as a healthy price correction and Mashinsky hinted that there is a possibility of BTC dropping as low as $16,000 before resuming its upward trek.

The traditional financial sector also found itself under pressure on Monday as the political situation in the United States continues to generate tension and uncertainty about the future of the country and the economy.

nalysts say the market was due for a correction

Nearly every time BTC price falls by thousands of dollars, bears, doomers and nocoiners emerge from the netherscape to issue calls for the death of Bitcoin.

“One worrying sign was not that Bitcoin price was rising, but its velocity, i.e. the speed at which it did move. From mid-December to end of December 2020, the median amplitude of the daily moves in Bitcoin doubled to 8.1%, then it almost doubled again from Jan.1st, 2021 to Jan.10th to 15.3%. The larger the amplitude, the more exchanges took place through the day between buyers and sellers. This is a healthy correction though to purge the excessive growth of the last 10 days, allowing Bitcoin to build a new base toward $50k and above.”

Hints at the driving force behind recent price movements could also be found through analyzing patterns emerging on social media.

According to Joshua Frank, CEO and founder of TheTie, an alternative data social analytics platform, the lack of Bitcoin Twitter mentions in December 2020 indicates that a small number of large investors were driving the price gains.

“On January third, both Bitcoin and crypto 24-hour tweet volume hit an all-time high. Retail interest has continued through the second week of January and monthly average Twitter conversations around Bitcoin are now at an all-time high in January. Unsurprisingly, this surge in Twitter activity has corresponded with a local top on Bitcoin.”