The year 2020 was a forgettable one for many reasons including lockdowns and economic restrictions. The shutdowns resulted in the worst economic crisis seen in decades. At the same time, most governments and central banks have responded with unprecedented fiscal stimulus and monetary expansion measures to revive their economies.

Therefore, institutional investors who are wary of potential inflation — and possibly even hyperinflation — as a result, are scrambling to hedge their portfolios with assets that can protect them from gradual currency depreciation. Until now, gold was considered the best store of wealth, and it has not disappointed investors as it is up about 24% year-to-date. 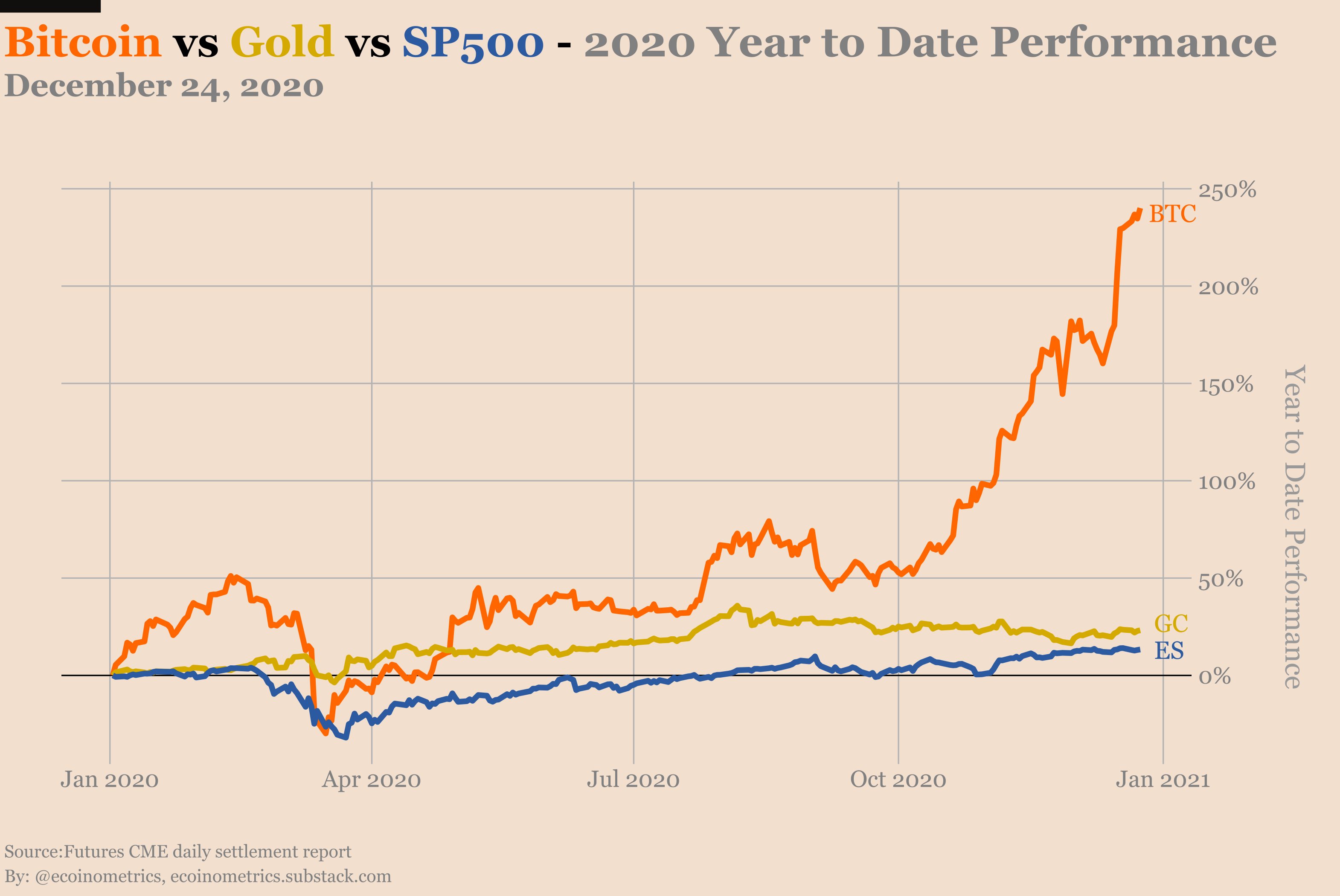 However, this year has seen an influx of institutional investors into Bitcoin, whose gains have been increasingly difficult to ignore, particularly versus gold and the S&P500, as shown in the chart above. Some institutions have diversified their portfolios with Bitcoin while others even reduced their gold holdings to invest in Bitcoin.

With Bitcoin’s massive 244% rally this year, portfolios of several investors who had purchased early will certainly outperform those without BTC exposure. This trend will force other investors to take note, increasing the possibility of Bitcoin’s rally to be more sustainable this time around, which may become a rising tide that may also lift other cryptocurrencies with it.

Therefore, let’s analyze the long-term charts of the top-10 cryptocurrencies and spot the critical levels that may pose stiff resistance. While such technical levels may not necessarily mark the top, they can be useful for traders to make informed decisions.

Bitcoin (BTC) is in a clear uptrend and is now in price discovery after breaking the all-time high made in 2017. Since clearing the $20,000 resistance, the rally has been sharp and that has pushed the relative strength index (RSI) deep into overbought territory. 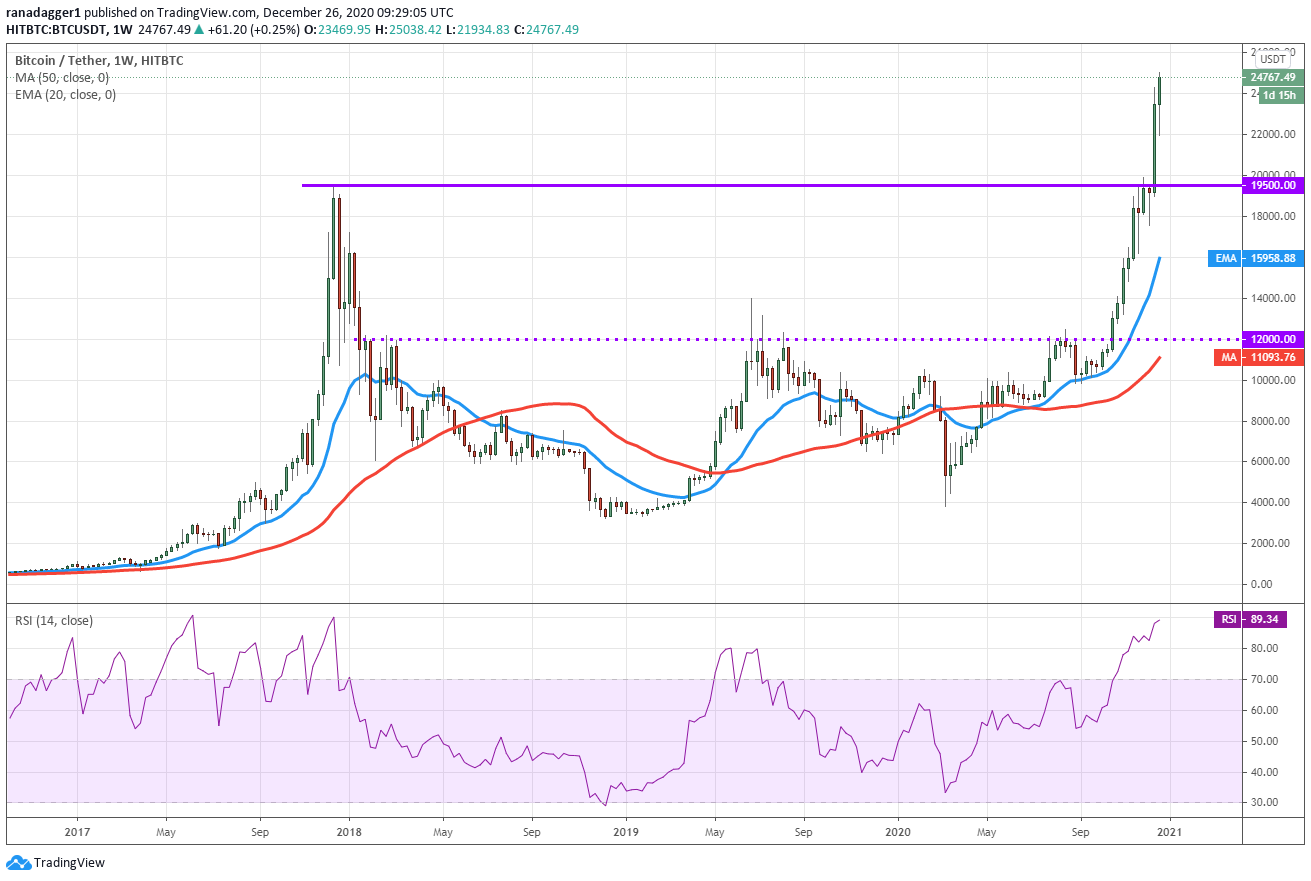 History shows that deeply overbought levels on the relative strength index (RSI) have resulted in sharp corrections. Therefore, the bears may try to pull down the price from the $25,000 psychological resistance.

The critical level to watch on the downside is $20,000. If the bulls succeed in flipping this to support during the next major correction, it will act as a new floor. That is likely to prepare the BTC/USD pair for the next leg of the uptrend.

Contrary to the bullish assumption, if the bears sink and sustain the price below $20,000 during the next correction, the aggressive bulls who have purchased above $20,000 may be forced to close their positions.

If that happens, the price may extend its decline to the 20-week exponential moving average ($15,958). The deeper the fall below $20,000, the longer it could take for the uptrend to resume.

Nevertheless, the current bull market is showing no signs of letting up. Moreover, six-figure Bitcoin price predictions for 2021 are becoming quite common with some traders even anticipating “conservative” targets of $200,000 by next December.

Ether (ETH) is in the process of forming a large rounding pattern that will complete on a breakout and close above $800. This reversal pattern has a long-term target of $1,500. 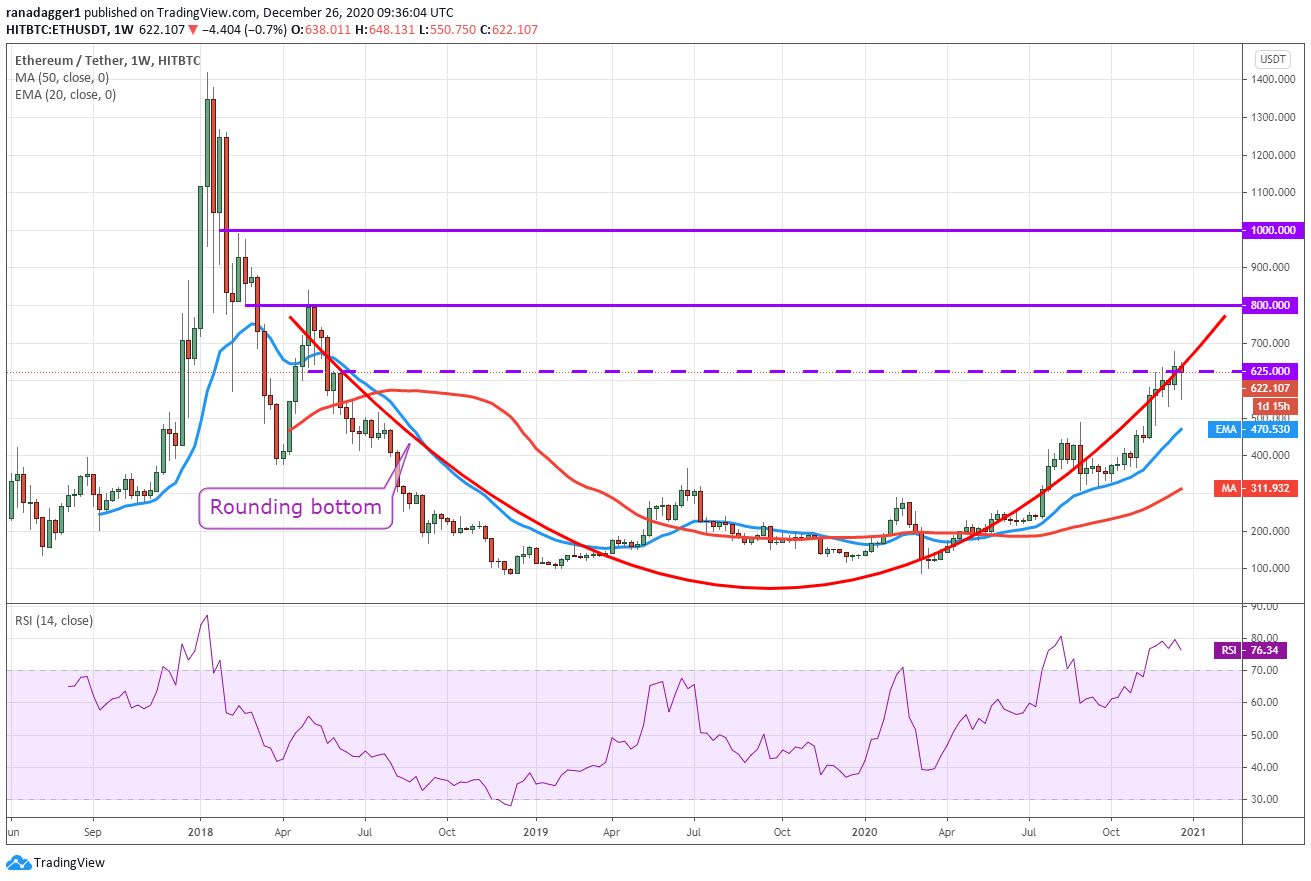 The bulls are currently attempting to push and sustain the ETH/USD pair above the $625 resistance and resume the uptrend. However, the rally is likely to encounter stiff resistance in the $800 to $1,000 zone.

If the price turns down from $800, the pair could enter a minor correction or consolidation for a few weeks. However, if the price remains above the 20-week EMA ($470), the possibility of a rise to $1,000 is high.

The bears will again try to stall the rally at $1000, but if the price does not fall below $800, it will boost the prospects of a breakout beyond $1,000. If that happens, the pair should retest the all-time high.

This bullish view will be invalidated if the price dips and sustains below the 20-week EMA.

XRP has been one of the most underperforming major altcoins in the past few months. The price is currently stuck in a large range of $0.10 to $0.80. The bulls attempted to propel the price above $0.80 but failed. That resulted in aggressive selling and the price has completely retraced the November gains. 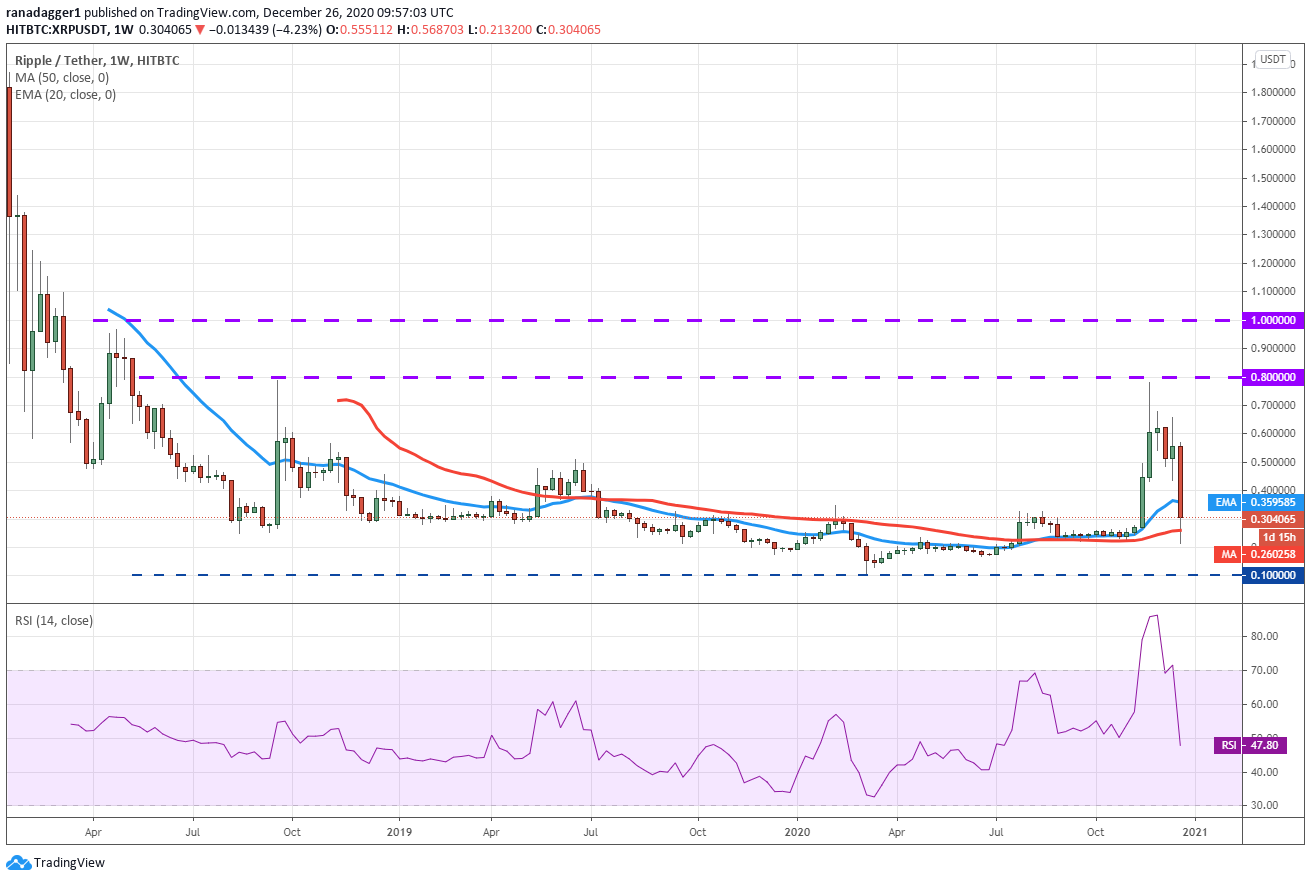 The flat moving averages and the RSI just below the midpoint suggest that the bulls have lost their grip and the XRP/USD pair could stay inside the large range for a few more months.

In a large range, the bulls buy the dips aggressively and sell near the resistance. To change this trend, the price will have to either break above or below the range.

If the bulls can push the price above the $0.80 to $1 overhead resistance zone, the XRP/USD pair may signal the start of a possible uptrend, which could surprise with a run to $2.50.

However, the bears will aggressively defend the overhead resistance zone, particularly as the negative news of the SEC lawsuit against Ripple is already resulting in big losses for XRP holders. Therefore, the XRP/USD pair could remain in the given range for most of 2021.

Litecoin (LTC) completed a rounding bottom pattern after the bulls pushed the price above the $80 resistance. This reversal setup has a minimum target objective of $136, just below the stiff resistance at $145.6725. 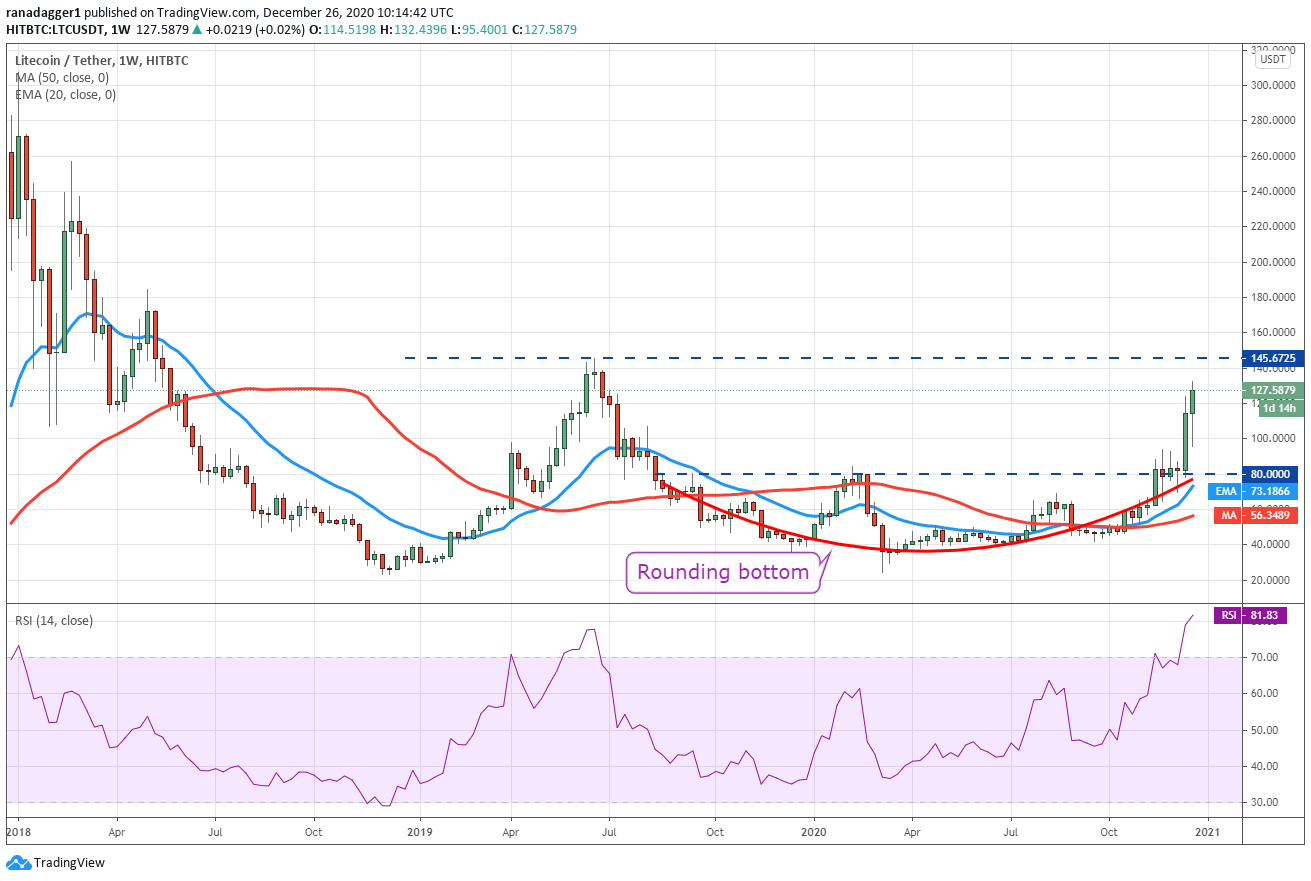 The rising 20-week EMA ($73.18) and the RSI in the overbought territory suggest that bulls have the upper hand. An overbought level on the RSI is a sign of euphoria in a mature uptrend but is a positive sign when a new up-move is starting.

The up-move can now reach $145.6725 where the bears are likely to mount a stiff resistance. If the bulls give up a lot of ground, the LTC/USD pair may consolidate just below this level for a few months. A break below $80 will signal advantage to the bears.

Bitcoin Cash (BCH) is currently stuck inside a large range of $160 on the downside and $515 on the upside. The price had been trading in the lower half of this range for the past many months but the bulls are currently attempting to push the altcoin into the upper half of the range. 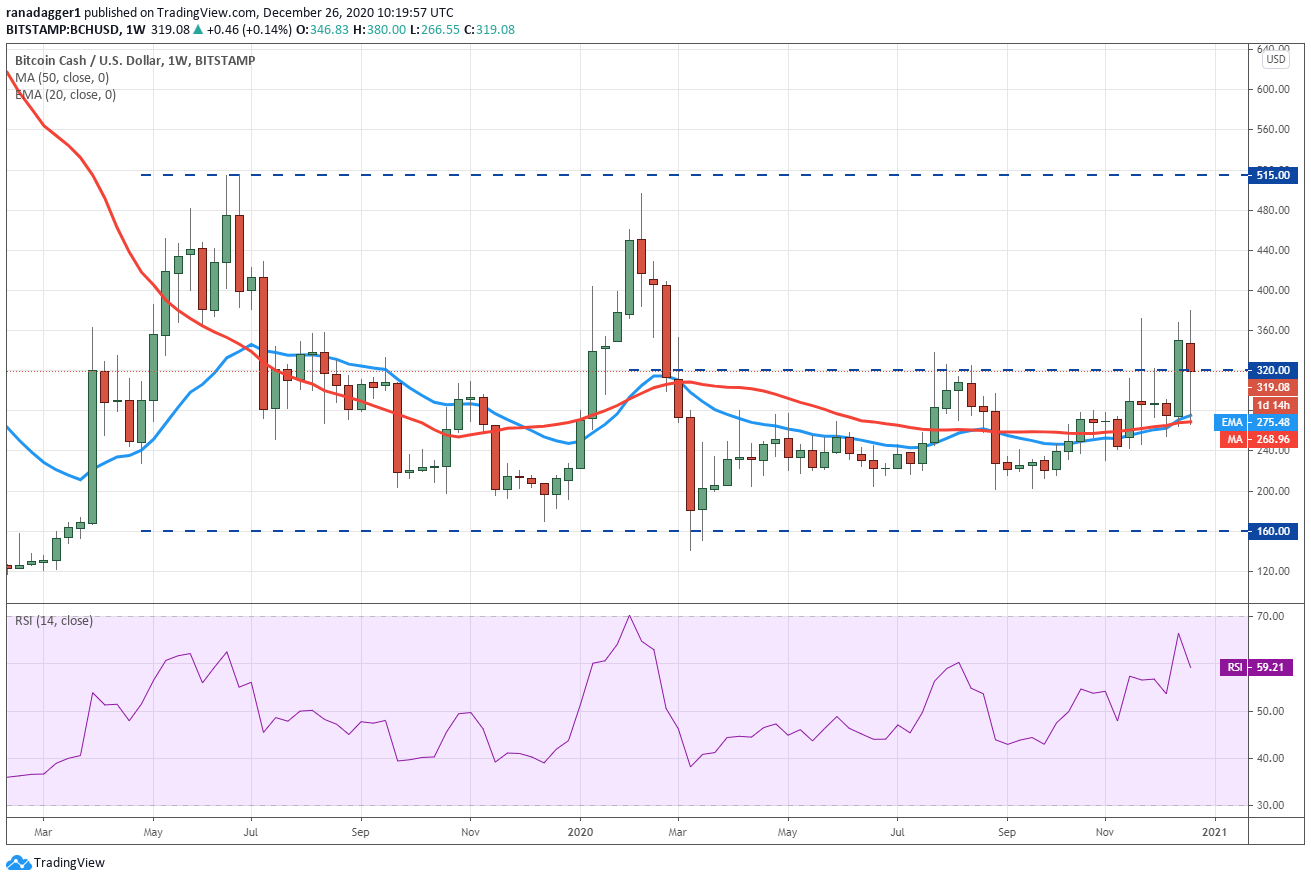 If the bulls can sustain the price above $320, the BCH/USD pair could gradually move up to $400 and then to the stiff overhead resistance at $515.

The pair had turned down from $515 on two previous occasions, hence, the bears will again try to defend this level. If they succeed, the pair may reverse direction from close to $515 and extend its stay inside the range.

This range-bound action will be invalidated if the bulls propel the price above $515. If that happens, the pair could start a new uptrend that may reach $870. 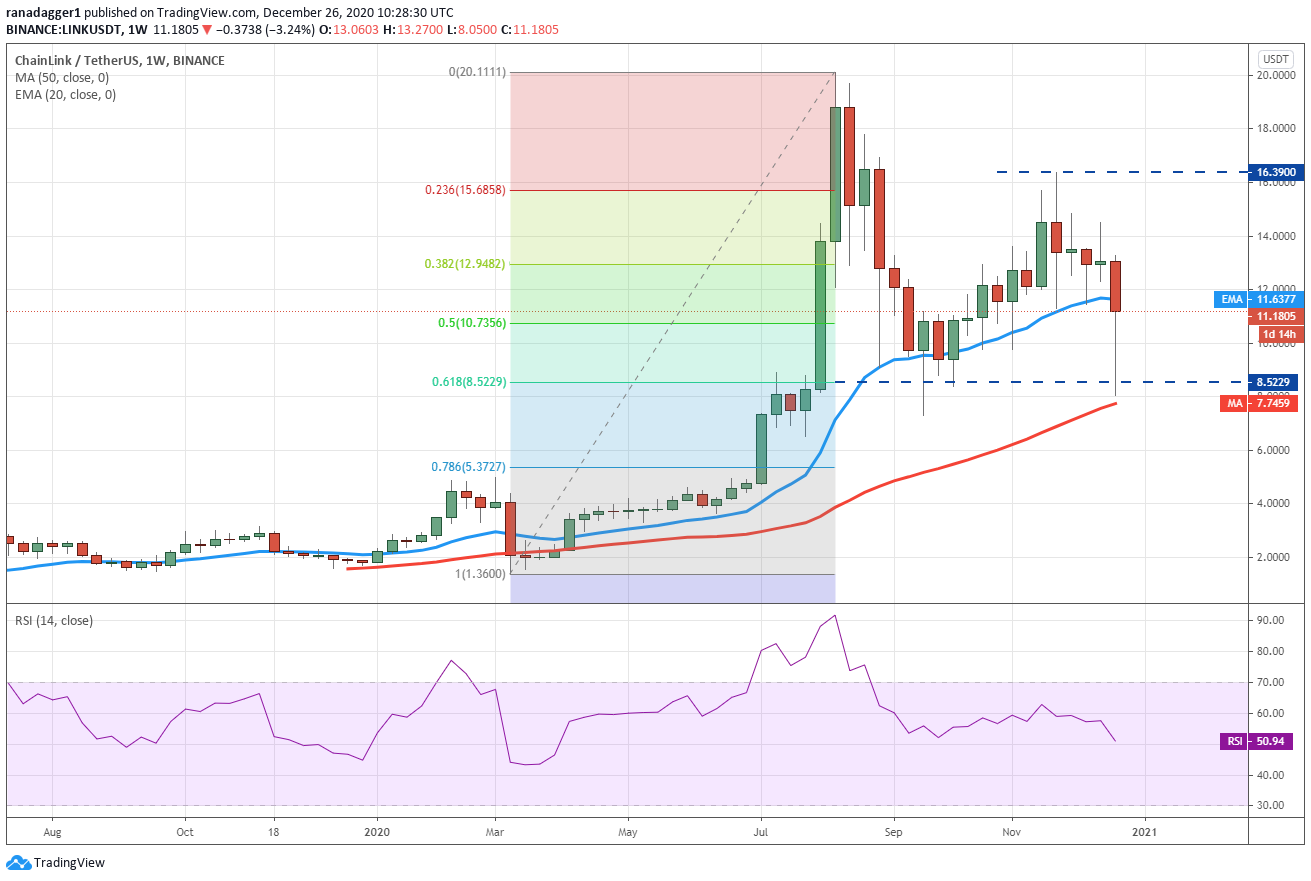 The subsequent rebound could not sustain above $16.39, which may have attracted selling by traders who had purchased at lower levels. The selling intensified after the bears broke the 20-week EMA ($11.63) support.

However, the long wick on the candlestick shows that the bulls again aggressively bought the dip below the $8.5229 support. The flattish 20-week EMA and the RSI near the midpoint suggest a few weeks of range-bound action.

On the contrary, if the bears sink and sustain the price below the $8.5229 support, the LINK/USD pair could start a new downtrend.

Cardano (ADA) has completed a bottoming formation and started a new uptrend. The bulls flipped the previous stiff resistance at $0.10 to support (marked by the ellipse on the chart), which indicates a trend chage. The break above $0.1543051 also started a higher-highs and higher-lows formation. 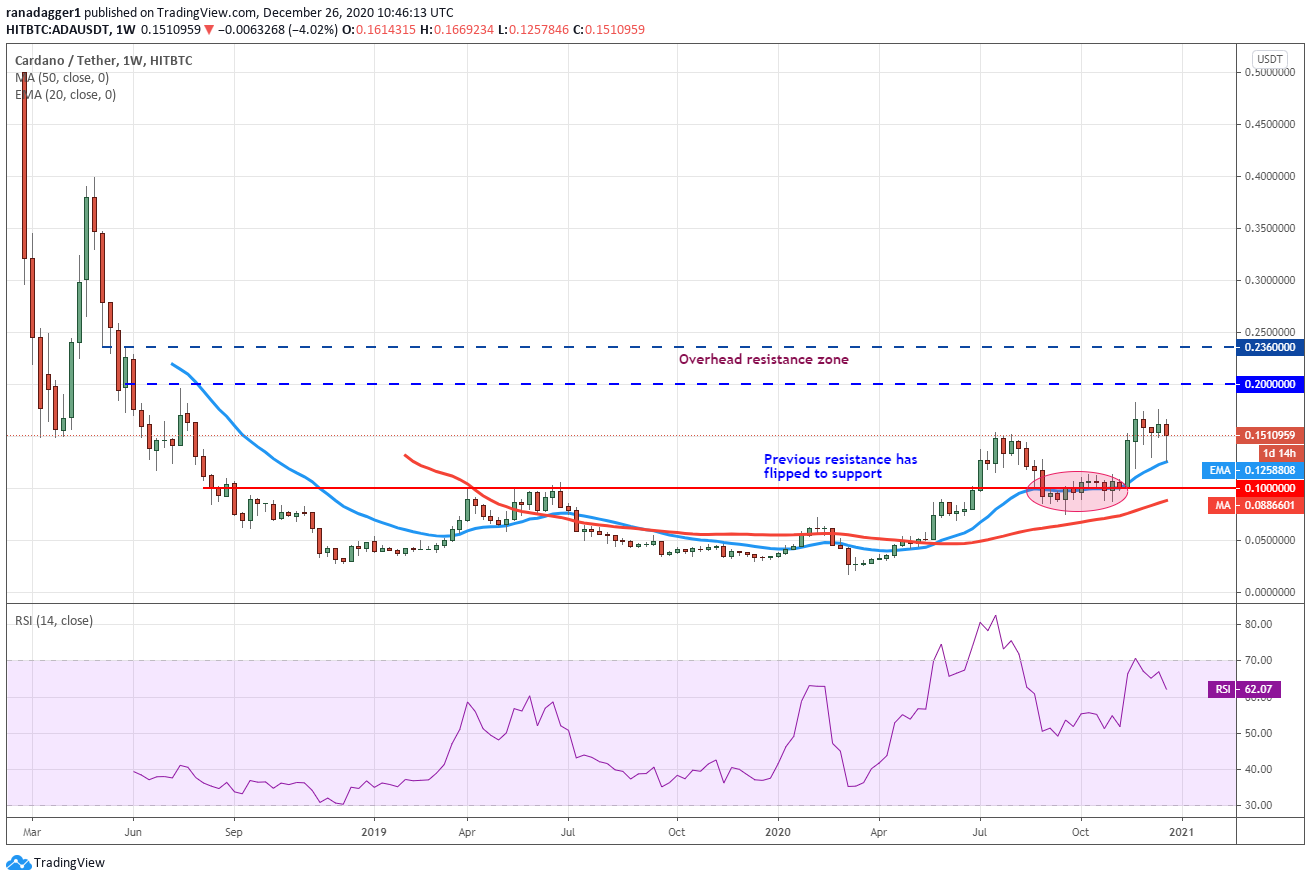 The up-move is likely to face a strong hurdle in the $0.20 to $0.2360 overhead resistance zone. If the price turns down from this zone, but the bulls again manage to form a new high above $0.15, that will keep the uptrend intact.

If the bulls can push the price above the resistance zone, the momentum is likely to pick up as there is no major resistance until the price reaches $0.40. The upsloping moving averages and the RSI in the positive zone suggest that bulls are in command.

This positive view will be invalidated if the price turns down from the overhead resistance zone and breaks the higher-highs and higher-lows formation.

Binance Coin (BNB) has been consolidating in a $25.1247 to $33.3888 range for the past few weeks. The bulls pushed the price above the range last week but could not sustain the higher levels. This suggests that bears are aggressively selling at higher levels. 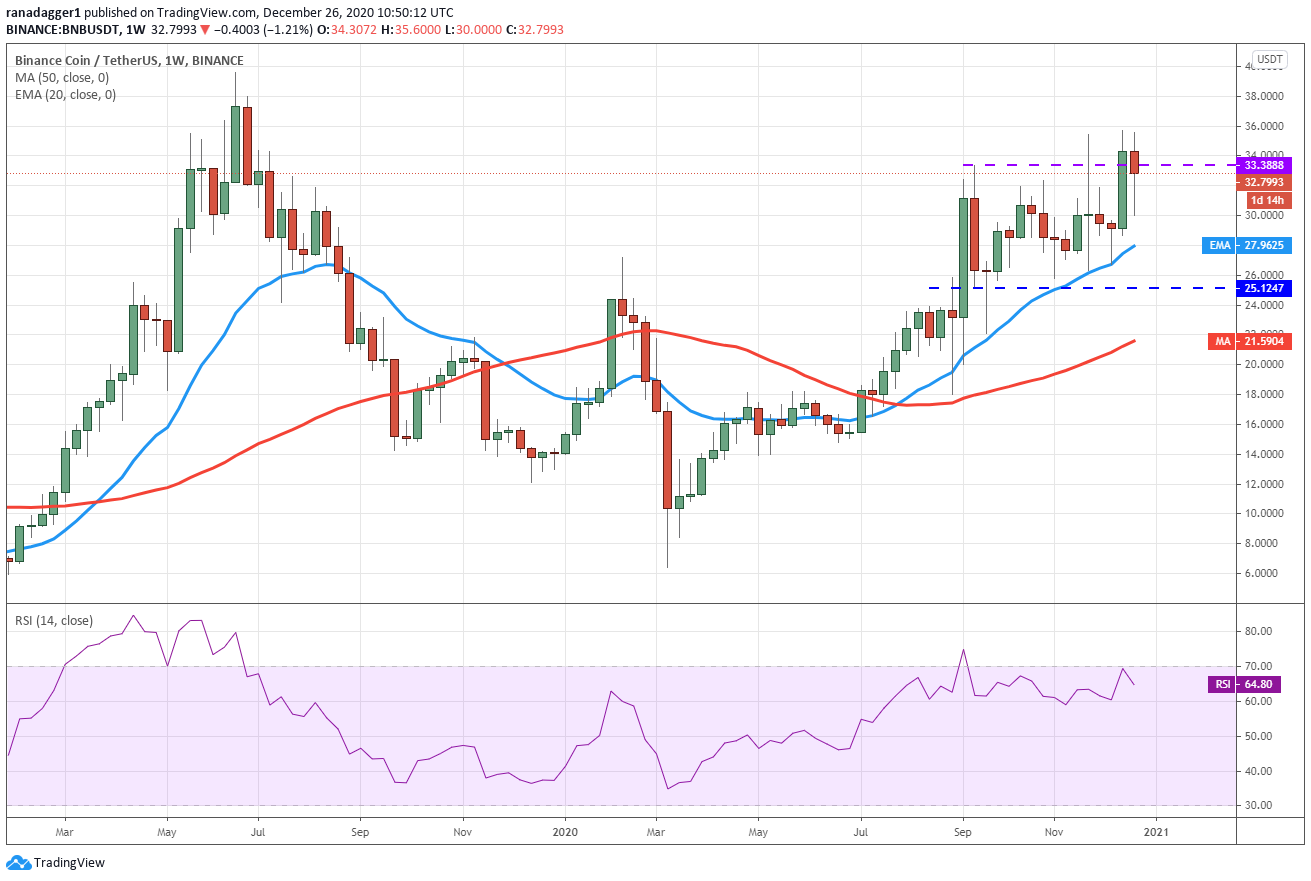 However, the upsloping moving averages and the RSI above 64 suggest that the bulls are in command. If the buyers can propel the price above $36, the BNB/USD pair could retest the all-time high at $39.5941.

This level may act as stiff resistance but if the bulls do not give up much ground, the possibility of a break above $39.5941 increases. If that happens, the pair could rally to the next target objective at $52.1335.

Contrary to this assumption, if the price turns down sharply from the all-time high, the pair may remain range-bound for a few months.

After the initial run-up in August, Polkadot (DOT) has been consolidating in a large range between $3.50 and $6 for the past few weeks. The longer the time spent in consolidation, the stronger the breakout will be. 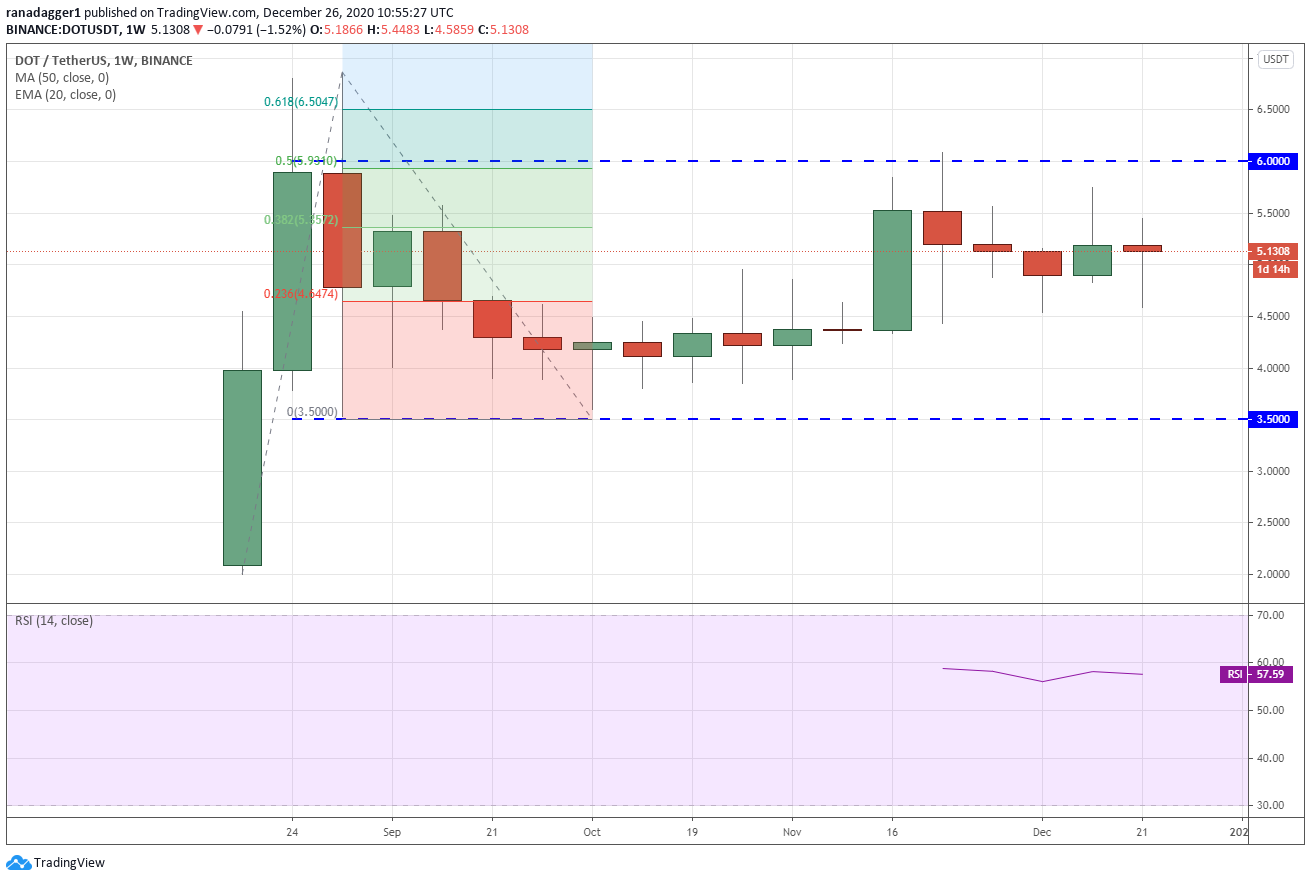 For the past five weeks, the price has been trading in the upper half of the range. This suggests that the bulls are not waiting for a drop to $3.50 to buy.

This positive view may be invalidated if the pair sharply reverses direction from the $6 to $6.8619 resistance zone. If that happens, the pair may continue its range-bound action for a few more months.

Stellar Lumens (XLM) broke out of a long rounding bottom pattern on Nov. 24 with huge volumes but the bulls could not build upon this move and start a new uptrend. The price had been stuck in a range for the past three weeks, which suggests a lack of buyers at higher levels. 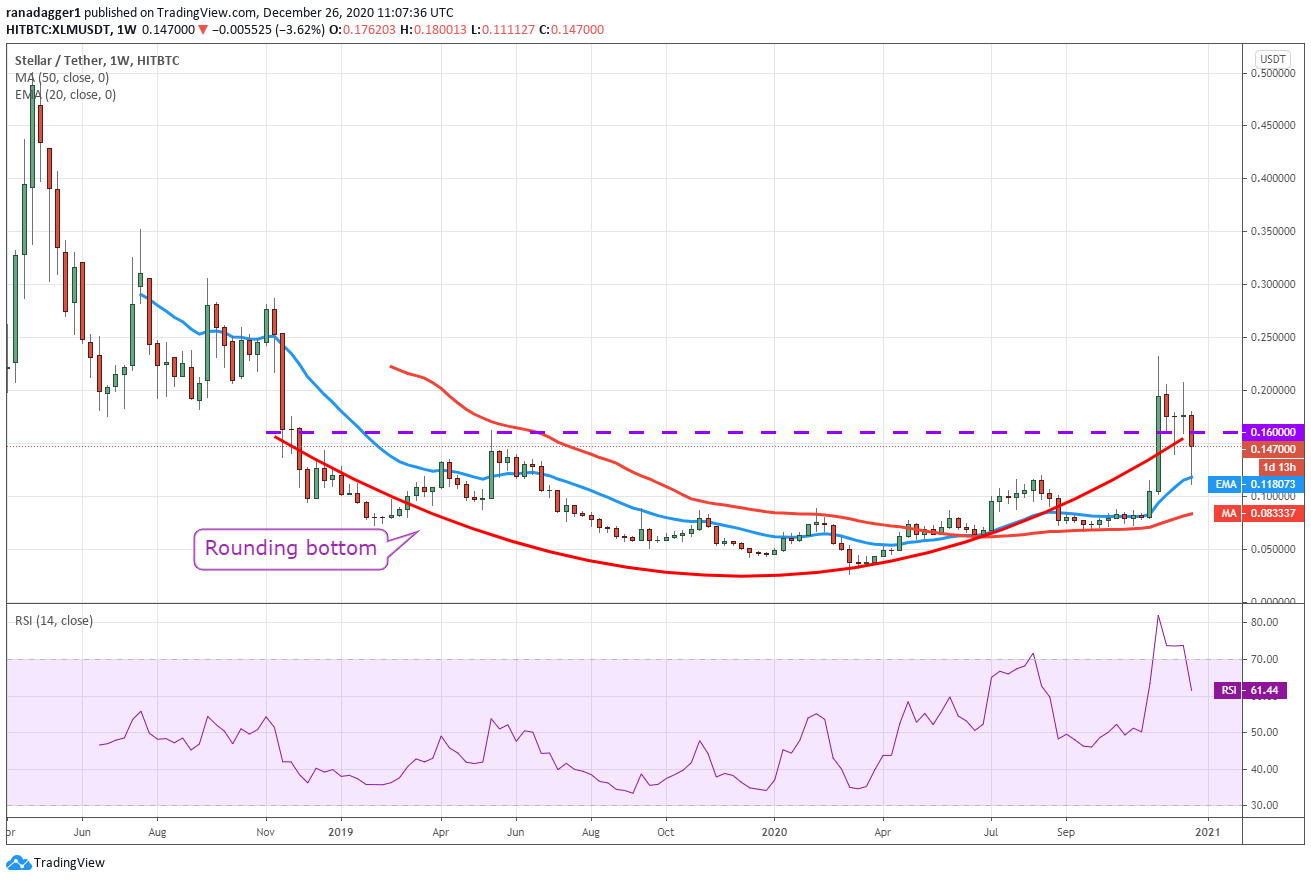 The failure to start a new rally could have attracted selling by the aggressive bears who are currently attempting to sustain the price below $0.16.

If they succeed, the XLM/USD pair could drop to the 20-week EMA ($0.118). A break below this support could signal that the breakout of the rounding bottom was a bull trap and the pair may spend some more time in the bottoming formation.

Conversely, if the bulls again buy the dip to the 20-week EMA and drive the price back above $0.16, it will suggest accumulation at lower levels.