When you ask someone what superpower they’d most like to have, they usually come up with the ability to fly, or to read thoughts, or maybe to see through multiple layers of clothing.

This year, all we wanted was the ability to hibernate.

Imagine! Going to sleep sometime around the Australian wildfires… taking a peek outside in mid-March and thinking “Ooooh, no, not sure about this at all” and cuddling up in a warm, happy bed until the U.S. election was over.

But think what you would have missed in crypto! 2020 was another decade-in-a-year for the industry, packed full of characters who charmed, hackers who harmed, and degens who farmed.

To celebrate a year that ended on a high note for hodlers, the Cointelegraph team of artists has created a poster-sized limited edition NFT commemorating some of the biggest stories of 2020. It’s titled “In crypto, hindsight is 20/20 and is available for just 0.02020 ETH.

Naturally, there will only ever be 2,020 copies.

How many of the stories can you spot? We’ll get you off to a start with a few of our favorites… 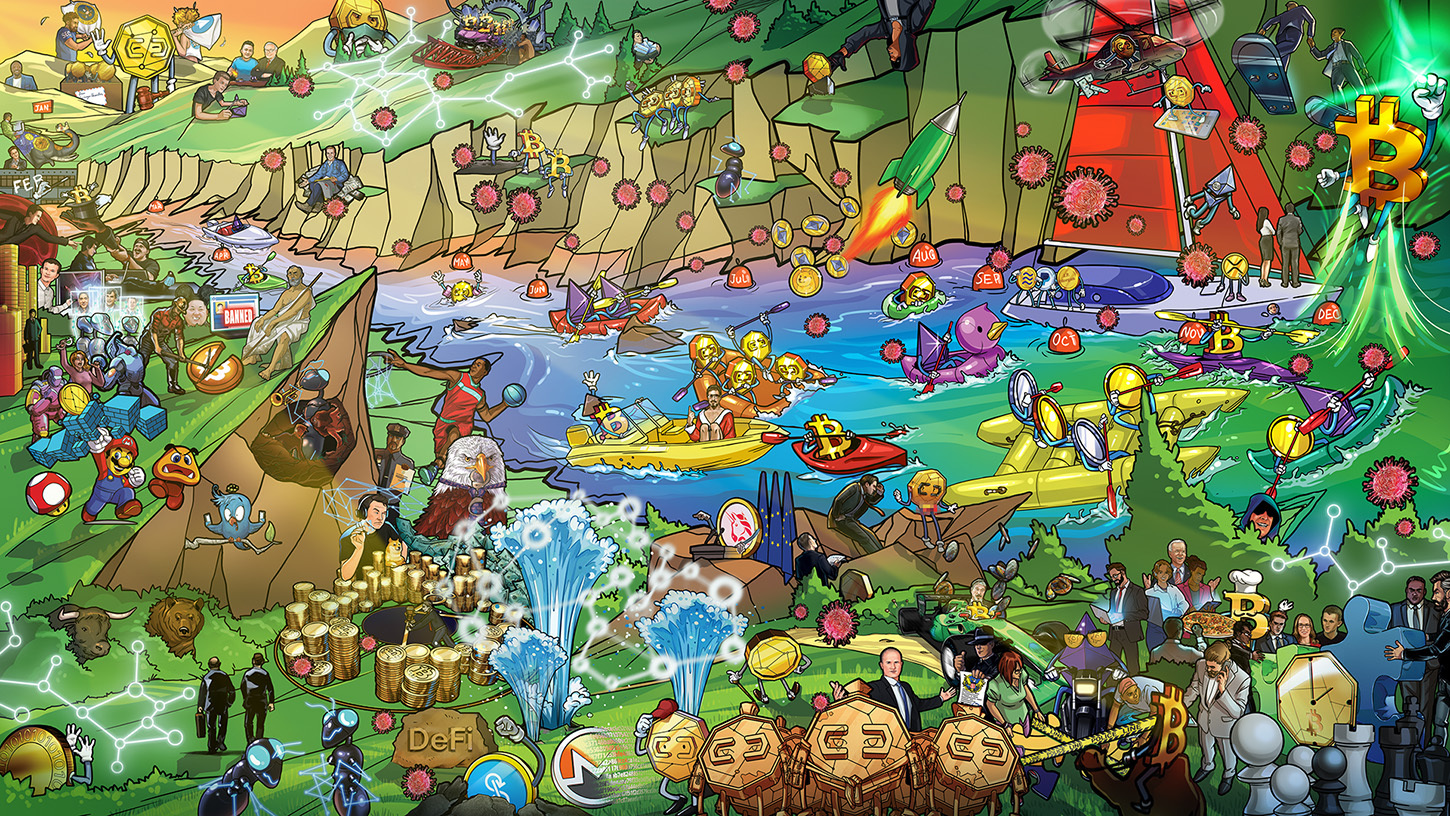 January: Telegram vs. the SEC

Here’s a story that could have been featured in any one of the first few months of the year. The Securities and Exchange Commission took issue with Telegram’s $1.7 billion private sale, and eventually Pavel Durov gave up on launching the network.

Although the technology didn’t die — it was resurrected and just achieved mainnet status thanks to the Free TON community — it was yet more proof that Jay Clayton’s SEC would maintain an activist stance on crypto in 2020. At least he’s gone now, and good riddance.

Back in February we presciently questioned whether DeFi was coming to an abrupt end as bZx was attacked twice. And when we say “presciently” we mean “wrongly”.

This being 2020, that cycle continued all year.

The acceleration of the global pandemic brought two key concepts at the heart of the crypto community into sharp focus. It became clear that government control of the money supply spigot means no fiat asset is safe (and that it makes a kind of brrrrrrr-ing sound as it’s turned on) and that Bitcoin’s narrative shift from means-of-exchange to store-of-value might actually help the digital asset’s credibility.

Almost nothing good has come of the disastrous response to the pandemic. While hodlers may have benefited financially from the proof that their thesis on Bitcoin as hard money was correct, the politicization of the virus means that the world has suffered a year that has threatened democracy itself.

Despite the wild rumors promulgated by sources who have to remain nameless in case they’re fact-checked, Binance did not pay $400 million for CoinMarketCap. Or anything close to it.

But it was still a mega-deal that demonstrated a 2020 trend: the slow dissipation of public adoration for Binance. Reaction to the deal was wary, to say the least, and the upstart-turned-incumbent found itself embroiled in controversy as ranking changes appeared to benefit it unfairly, following promises of the data aggregator’s independence.

These days, CoinGecko is catching up fast. Bobby Ong was rumored to be on the verge of selling the site for $5 million earlier this year. He must be grateful for the uncharacteristic lack of vision on the part of its suitor…

The third halving (or halvening, for those who prefer Middle Earth’s Westron tongue) was almost entirely devoid of drama.

It was supposed to happen. It happened. Code is law.

Of course, the after-effects have been more intriguing than the event itself (although it certainly threw our video team for a loop).

Plan B’s stock-to-flow model predicted a surge in Bitcoin’s price as a direct result of the halving and subsequent supply crisis, and despite the naysayers it’s right on schedule.

Hope for the mass adoption of crypto as a payment solution has often been predicated on debit or credit cards that make it easier to spend. So when Wirecard, which counted major companies such as Crypto.com and TenX as customers, appeared to misplace $2.1 billion there were… concerns over the future of the sector.

Those concerns haven’t dented the ambitions of Crypto.com, which soon replaced Wirecard with PayrNet, while some saw the fall of Wirecard as a net positive for the industry.

One man and a worthless token can change the world.

Of course, that one man now works with a dedicated team of DeFi developers, the worthless token topped out at $43,678, and the world was already changing… but don’t let the details fool you.

The story of Andre Cronje’s contribution to technology and finance may well be told over drinks in the boardroom for decades to come.

At least the Wright brothers had each other.

Michael Saylor may be a genius (he’s invested over a billion dollars of his company’s treasury in Bitcoin) and he may be a lunatic (read his Twitter feed) but what we can say for certain is that he’s boldly going where no major company has gone before.

Saylor’s dramatic announcement has been heralded as the moment that mainstream business entities beyond funds and investment banks had to confront a new reality. If MicroStrategy’s bet was successful, it could immediately place other corporate treasuries at risk — specifically, at risk of being unable to claim similar portfolios due to Bitcoin’s limited supply.

There’s often a fine line between courage and craziness. Perhaps Saylor is 2020’s best crypto example of that truth.

If MicroStrategy was a pointer to increased institutional adoption of crypto, PayPal was the biggest indication yet that Josephine Public would soon be exposed to digital assets.

Crypto assets aren’t tradeable outside the PayPal ecosystem, but that hasn’t stopped the company buying an estimated 70% of all newly-issued Bitcoins as a reserve.

And while PayPal’s own stock soared on the news that it would support Bitcoin, it also provided the impetus for an increasingly parabolic price movement for the leading digital asset… which rapidly flippened the company’s market cap.

October: McAfee eats his own… words

“Taxation is illegal,” declared John McAfee in January of 2019, clarifying (for those who might have a vested interest) that he hadn’t filed a return in eight years.

“No, you’re illegal,” the IRS responded — we’re paraphrasing — and had him arrested and thrown in a Spanish jail.

It was certainly quite the year for crypto-related arrests.

Gradually, then suddenly. That’s how Bitcoin reclaimed the territory lost since the FOMO days of December 2017.

Despite ‘dying’ over and over and over again (in the minds of critics, at least) Bitcoin is now sitting comfortably at well over $25,000 and enjoying a growing consensus that it is a genuine alternative to gold.

Even the most conservative prognosticators are coming around.

Speaking of gradually… Ethereum took a long and winding road to the next iteration of the leading smart contract platform. But as the deposit contract filled up, the prospects for a successful December 1st launch finally became clearer.

Many of the year’s top trends — from DeFi to the growing adoption of NFTs — feature Ethereum as a key player. It’s tough to imagine another platform seizing its crown in the near future.

Although full deployment of Ethereum 2.0 will take a lot longer, the roadmap for is shiny and bright.

As indeed is its price, which has risen 576% since the depths of the initial COVID crash.