Investors are beginning to worry that Bitcoin’s (BTC) uptrend could be in peril after the top-ranked cryptocurrency failed to pull above the $40,000. Some traders are afraid that a repeat of the crushing 2018 bear market is on the cards again if BTC fails to find bullish momentum.

However, a study of both the bull markets shows distinct differences that are noteworthy. Research from Pantera Capital found that after the current bull move, 86% of the crypto market’s value is concentrated in Bitcoin and Ethereum, largely because institutional funds have flowed into each cryptocurrency.

In 2017, the top two coins only held about 52% of the value, with the rest being held in several altcoins that turned out to be “non-functioning” coins. In the current bull market, retail investors seem to be largely absent so the type of speculation witnessed in 2017 has yet to appear in 2021. 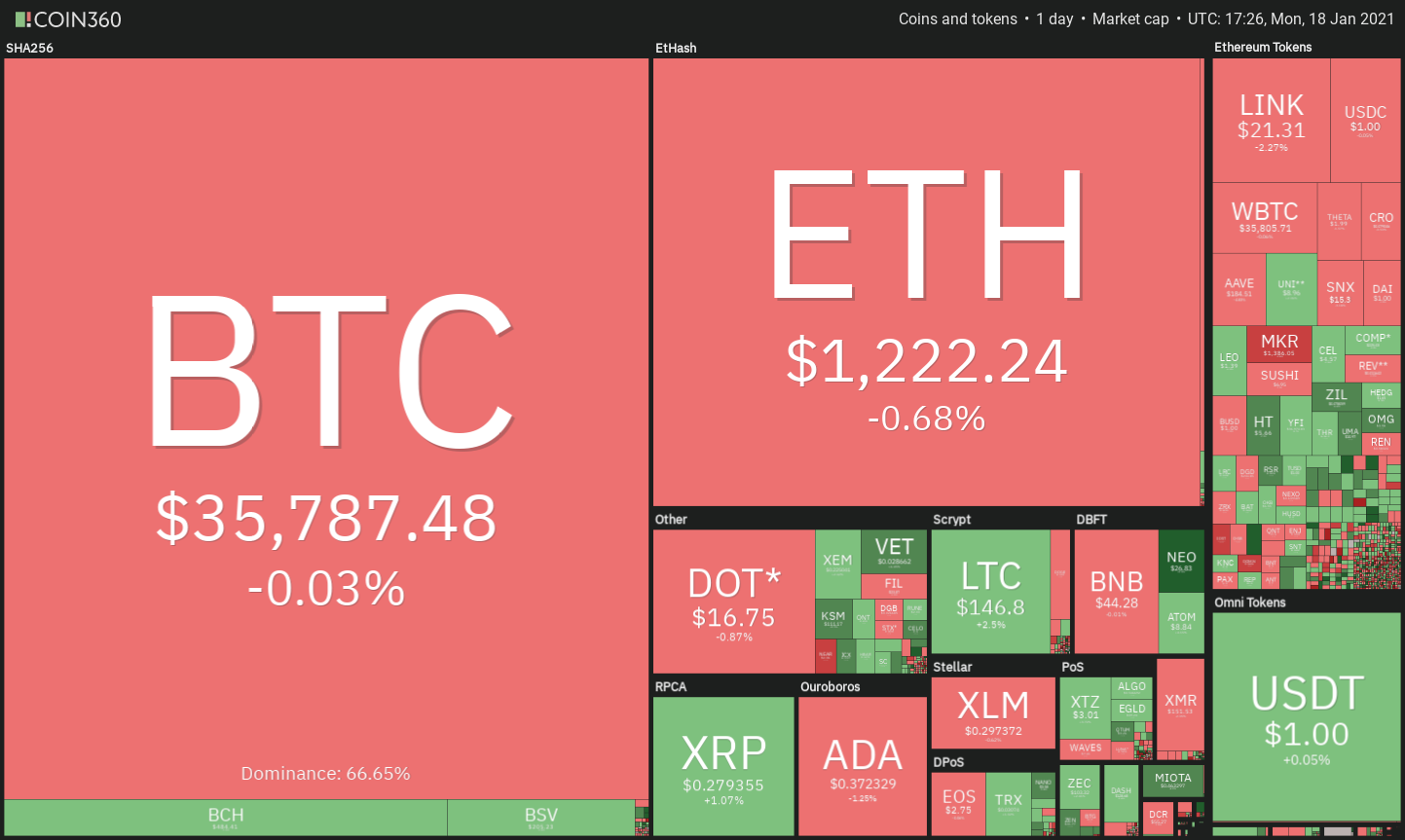 Guggenheim Partners’ chief investment officer Scott Minerd recently said that his long-term Bitcoin price target of $400,000 remains and his recent tweet asking his followers to “take some money off the table” was based on the short-term price movement.

Although Minerd has not included Bitcoin in his mutual fund portfolios, he said purchases have been done in some private funds managed by Guggenheim.

While Bitcoin consolidates after the recent bull phase, select altcoins are extending their up-move. Can this continue? Let’s analyze the charts of the top-10 cryptocurrencies to find out.

Bitcoin is attempting to rebound off the 20-day exponential moving average ($34,380) but the weak bounce suggests a lack of urgency among bulls to accumulate on dips. As the price is stuck inside a symmetrical triangle, technical traders may wait for the price to break out of the pattern before buying. 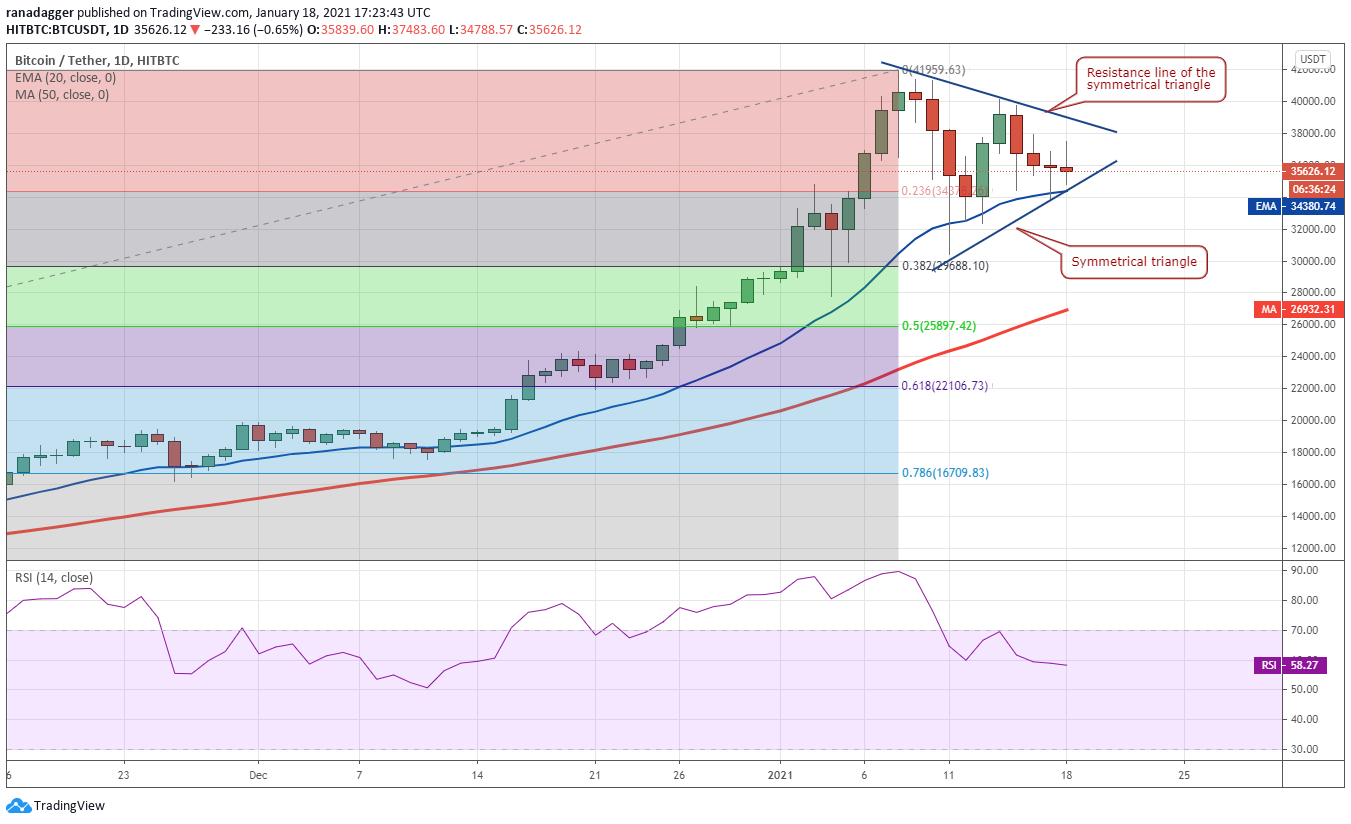 If the price does not rise to the resistance line of the symmetrical triangle, the bears may smell an opportunity and will try to sink the price below the triangle. If they succeed, the BTC/USD pair may drop to the 38.2% Fibonacci retracement level at $29,688.10.

This is an important level to watch out for because, if the bears sink the price below this support, the drop could extend to the 50-day simple moving average ($26,932). The deeper the fall, the longer it is likely to take for the uptrend to resume because every rise will be met with a wave of selling by traders who are stuck at higher levels.

Another sharp correction could be avoided if bulls thrust the price above the triangle. The all-time high at $41,959.63 may act as a stiff resistance but if the bulls can drive the price above it, the pair could reach $50,000.

Ether (ETH) remains in a strong uptrend and is currently consolidating near the $1,300 to $1,349.10 overhead resistance. The upsloping moving averages and the relative strength index (RSI) near the overbought zone suggest the path of least resistance is to the upside. 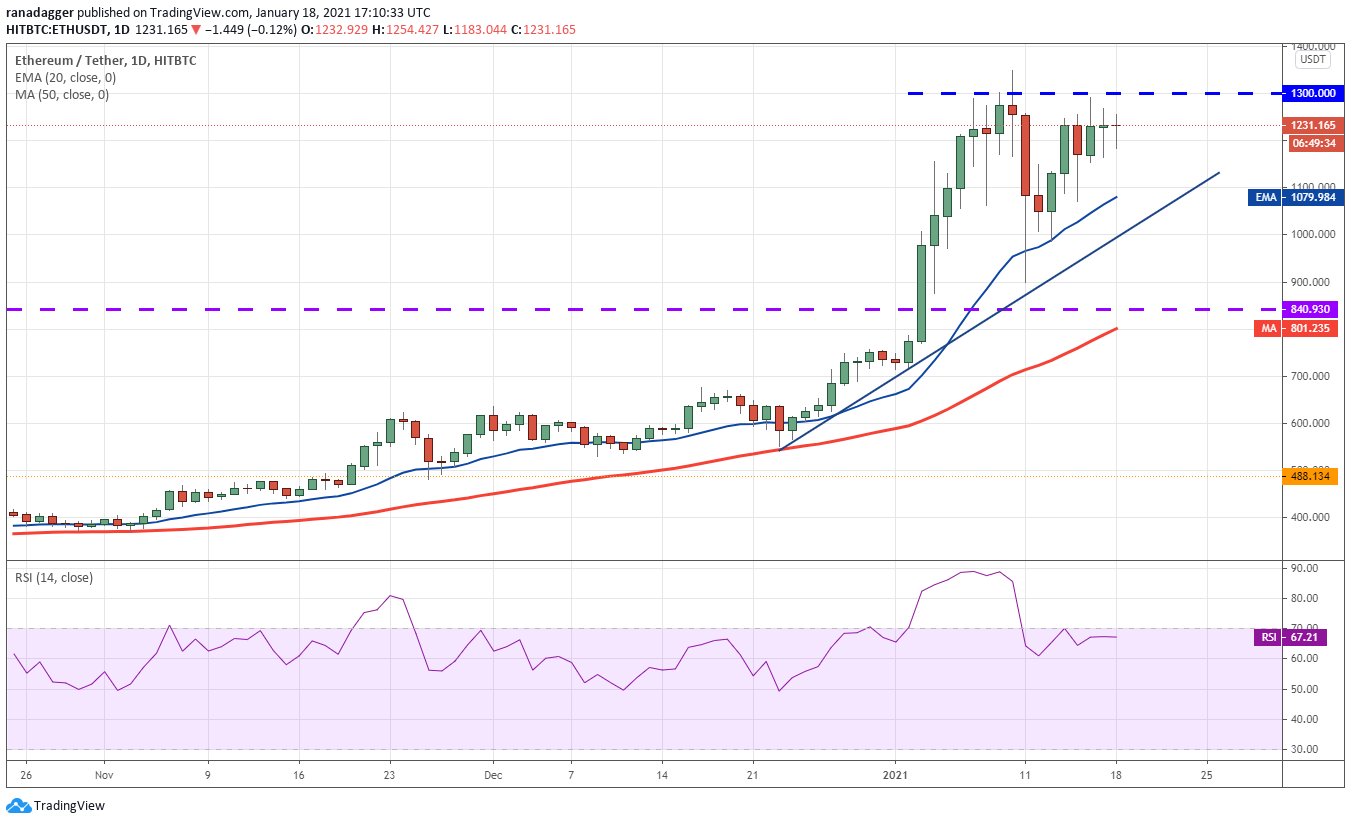 The ETH/USD pair formed a Doji candlestick pattern on Jan. 17 and again today, indicating indecision between the bulls and the bears. If the uncertainty resolves to the upside and the bulls push the price above the overhead resistance, the uptrend could resume. The next target is $1,420 and then $1,675.

On the contrary, if the price turns down from the current levels and breaks below $1,152, the pair could drop to the 20-day EMA ($1,079). A strong rebound off this support will suggest accumulation at lower levels and the bulls will again try to resume the uptrend. 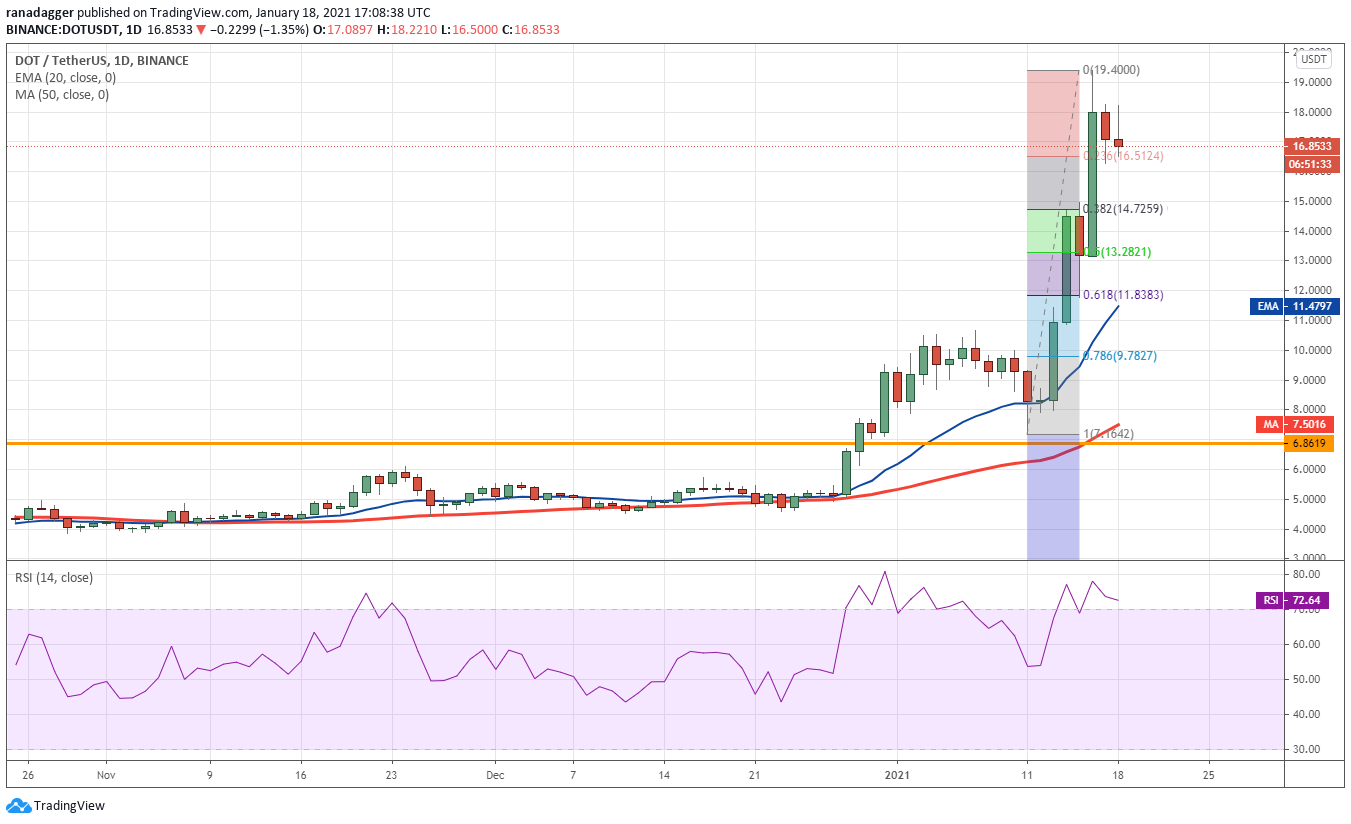 Some short-term traders may have booked profits after the sharp rally, but the shallow correction suggests that the majority of the traders are not panicking. If the bears fail to pull the price below the 38.2% Fibonacci retracement level at $14.7259, the uptrend could resume.

If the bulls can push the price above $20, the DOT/USD pair could rally to $24 and then to $30. However, if the bears sink the price below $14.7259, the pair may consolidate the recent gains for a few days before starting the next trending move. The bears will signal a comeback if they can sustain the price below the 20-day EMA ($11.47).

The bears have been defending the 20-day EMA ($0.297) for the past few days but they have not been able to capitalize on the weakness and sink XRP below $0.25, which suggests a lack of sellers at lower levels. 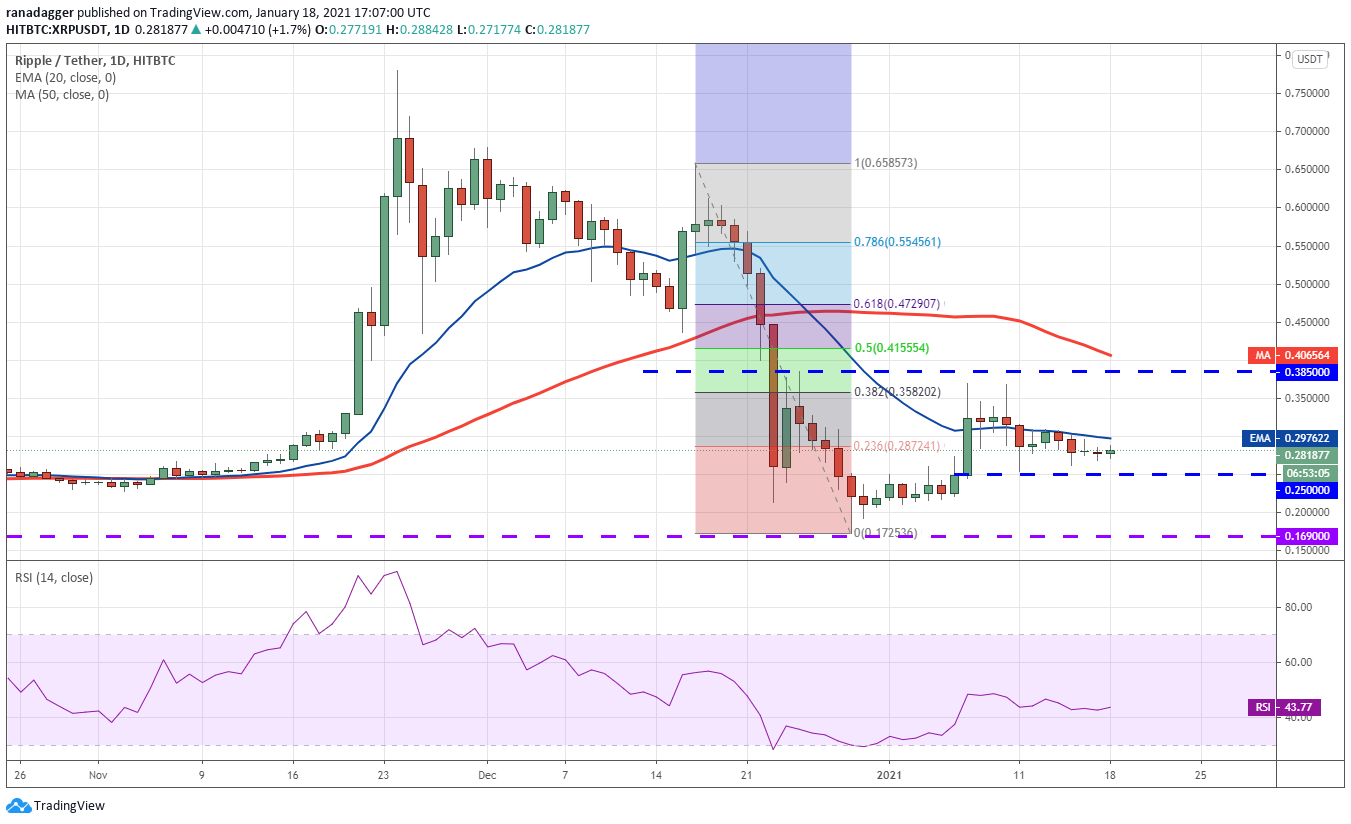 The bulls will now attempt to push the price above the 20-day EMA. If they succeed, the XRP/USD pair may rally to $0.385. The bears are likely to defend this resistance aggressively.

If the price turns down from this resistance, the pair could extend its stay inside the range for a few more days. On the other hand, if the bulls push the price above the range and the 50-day SMA ($0.406), a new uptrend could begin.

Cardano (ADA) soared above the downtrend line on Jan. 16, signaling the resumption of the uptrend. The bulls pushed the price near the overhead resistance at $0.40 on Jan. 17, which may act as a stiff barrier. 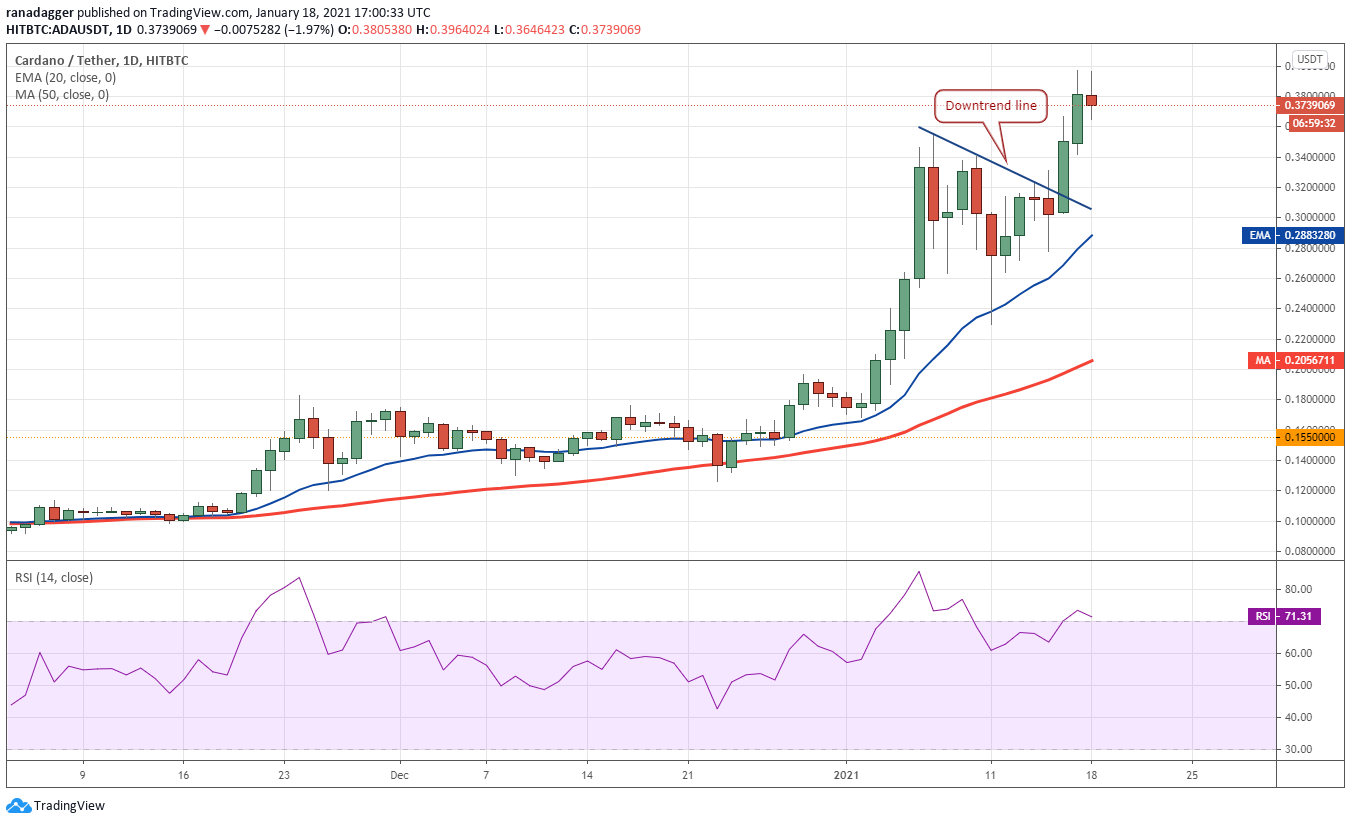 However, the upsloping moving averages and the RSI in the overbought zone suggest that bulls are in command. If the bulls do not allow the price to dip and sustain below $0.34, the likelihood of a break above $0.40 increases. The next target on the upside is $0.50.

Contrary to this assumption, if the bears sink the price below $0.34, it will suggest aggressive profit-booking at higher levels. The ADA/USD pair could then drop to the 20-day EMA ($0.288).

A strong rebound off the 20-day EMA could keep the uptrend intact but a break below it may signal a short-term top.

The bulls and the bears have been battling it out near the 20-day EMA ($144) for the past few days. The buyers are currently trying to push Litecoin (LTC) above the 61.8% Fibonacci retracement level at $157.6904. 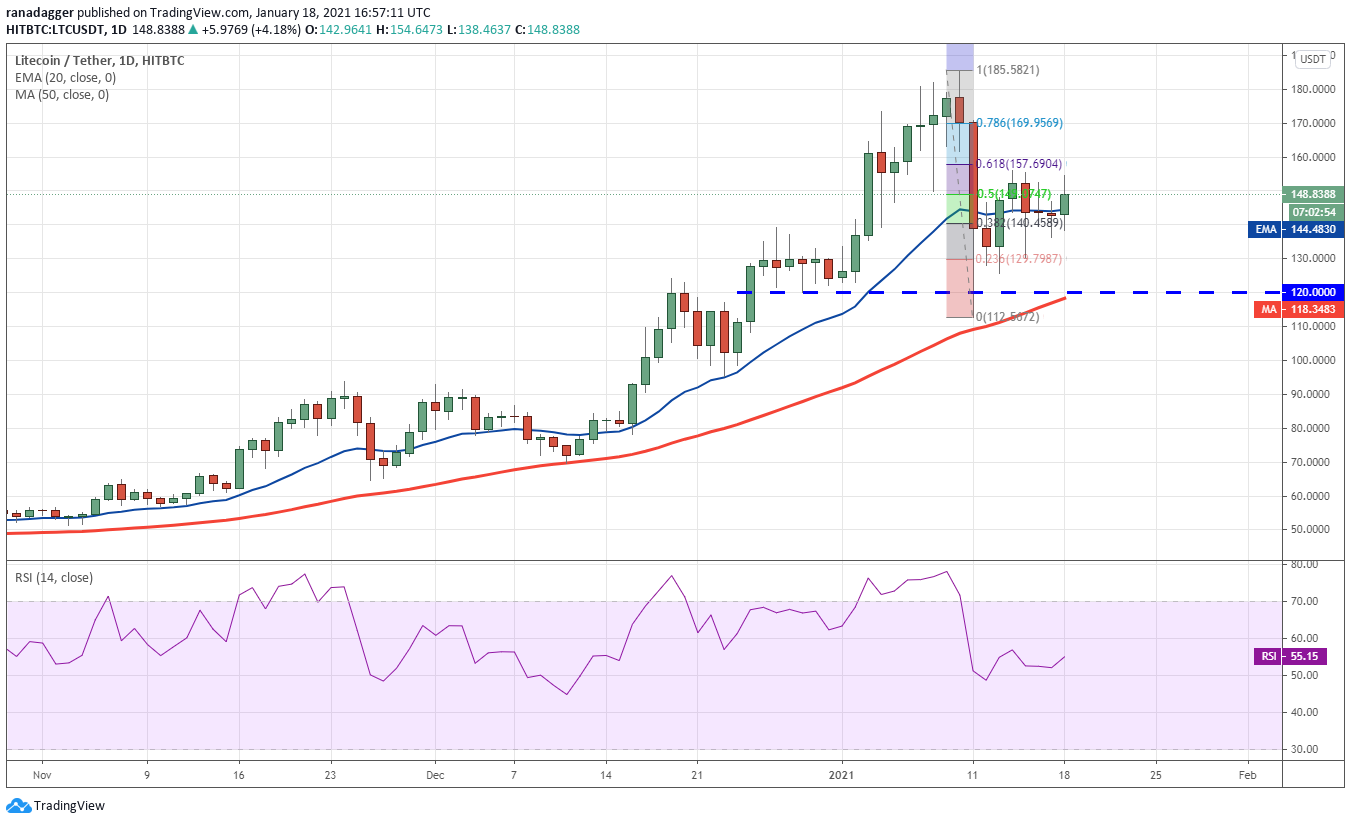 However, the bears are unlikely to give up without a fight. They will pose a stiff challenge at $157.6904. If the price turns down from this resistance, the pair may remain range-bound between $130 and $160 for a few days.

The trend will turn in favor of the bears if they can sink and sustain the price below the 50-day SMA ($118).

The bears are defending the $515.35 resistance but they have not been able to sink Bitcoin Cash (BCH) below the uptrend line. This shows the bulls are buying on dips. 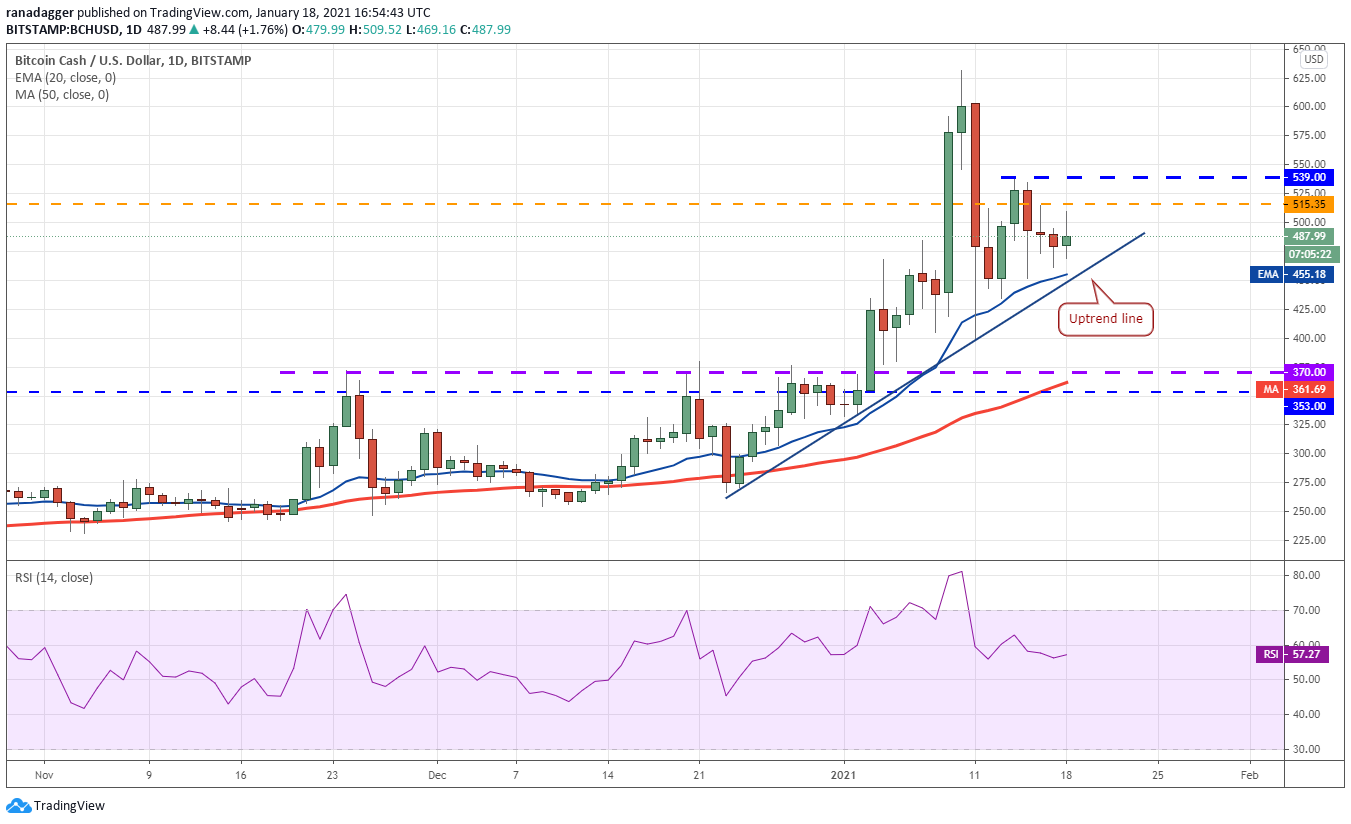 The upsloping moving averages and the RSI in the positive territory suggest the path of least resistance is to the upside.

Contrary to this assumption, if the price turns down from the overhead resistance and breaks below the uptrend line, it will suggest the sentiment has turned negative and traders are closing their positions on a rally. This could result in a fall to $370. 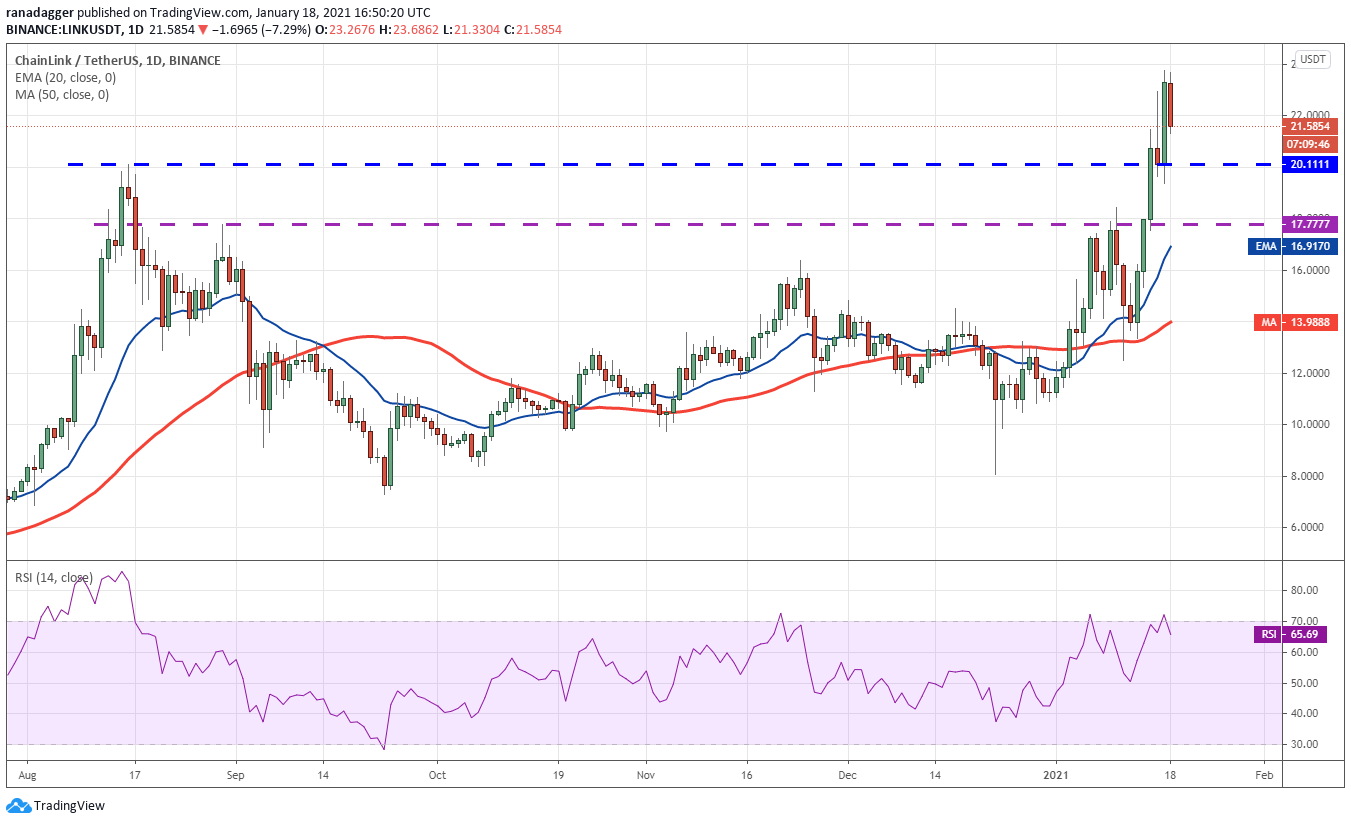 However, bears are not willing to give up easily. They had attempted to stall the rally on Jan. 16 as seen from the long wick on the day’s candlestick and they are again trying to pull the price down today. The bears will have to sink and sustain the price below $20.1111 to gain the upper hand.

But if the LINK/USD pair rebounds off $20.1111, it will suggest the level has flipped to support and may act as a floor during future declines. If the bulls can push the price above $23.767, the uptrend could reach $27 and then $30.

Stellar Lumens (XLM) has been trading inside the $0.26 to $0.325 range for the past few days, but the upsloping 20-day EMA ($0.257) and the RSI in the positive territory suggest bulls have the upper hand. 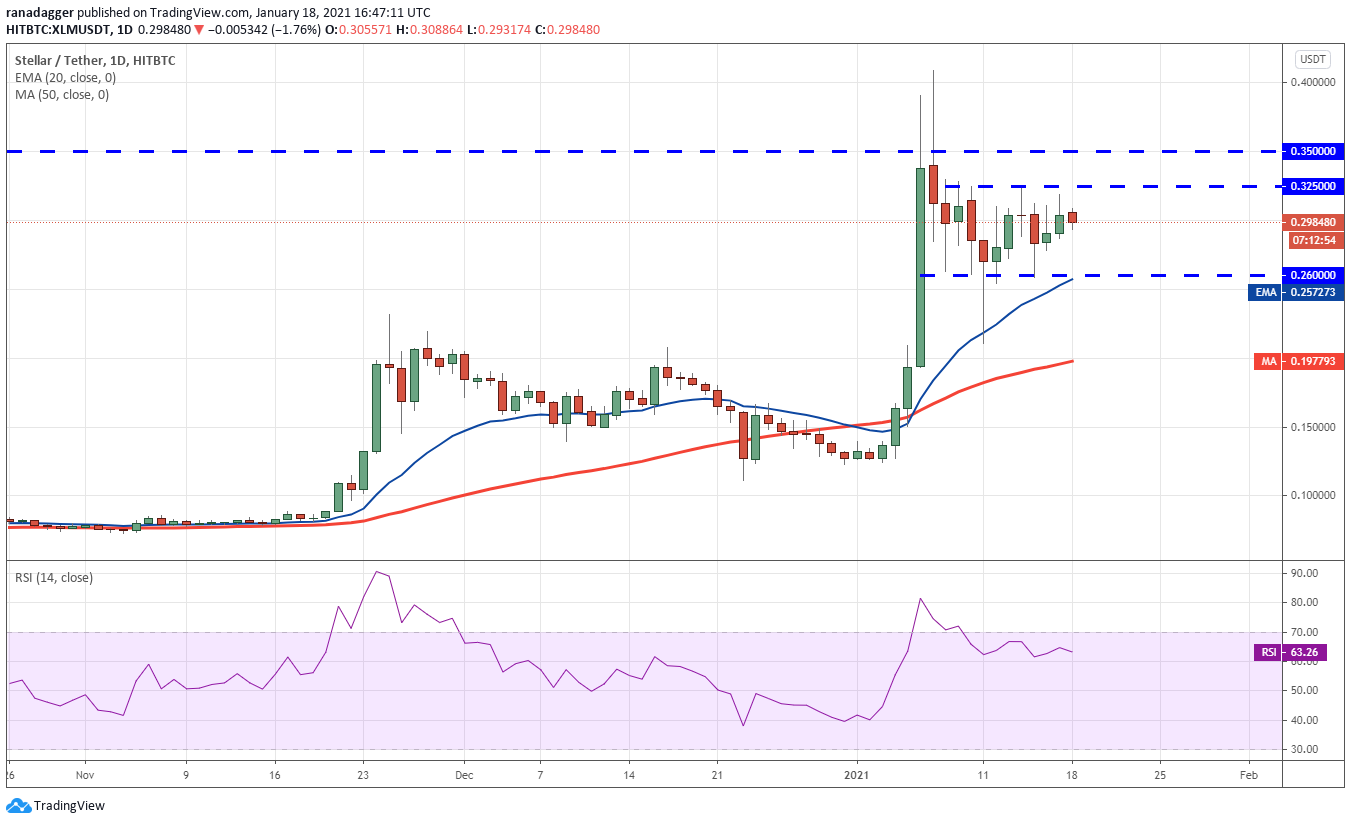 If the buyers can push the price above $0.325, the XLM/USD pair may rally to $0.409 and if this level is also scaled, the up-move may reach $0.50. The longer the time spent in the range, the stronger will be the breakout from it.

Contrary to this assumption, if the bears sink the price below the range and the 20-day EMA, it could attract profit-booking by traders and the pair could drop to the 50-day SMA. Such a move will indicate advantage to the bears.

Binance Coin (BNB) rose to a new all-time high on Jan. 17 and followed it up with another new high today at $46.8888. However, the bulls are struggling to sustain the higher levels, which suggests some traders are booking profits. 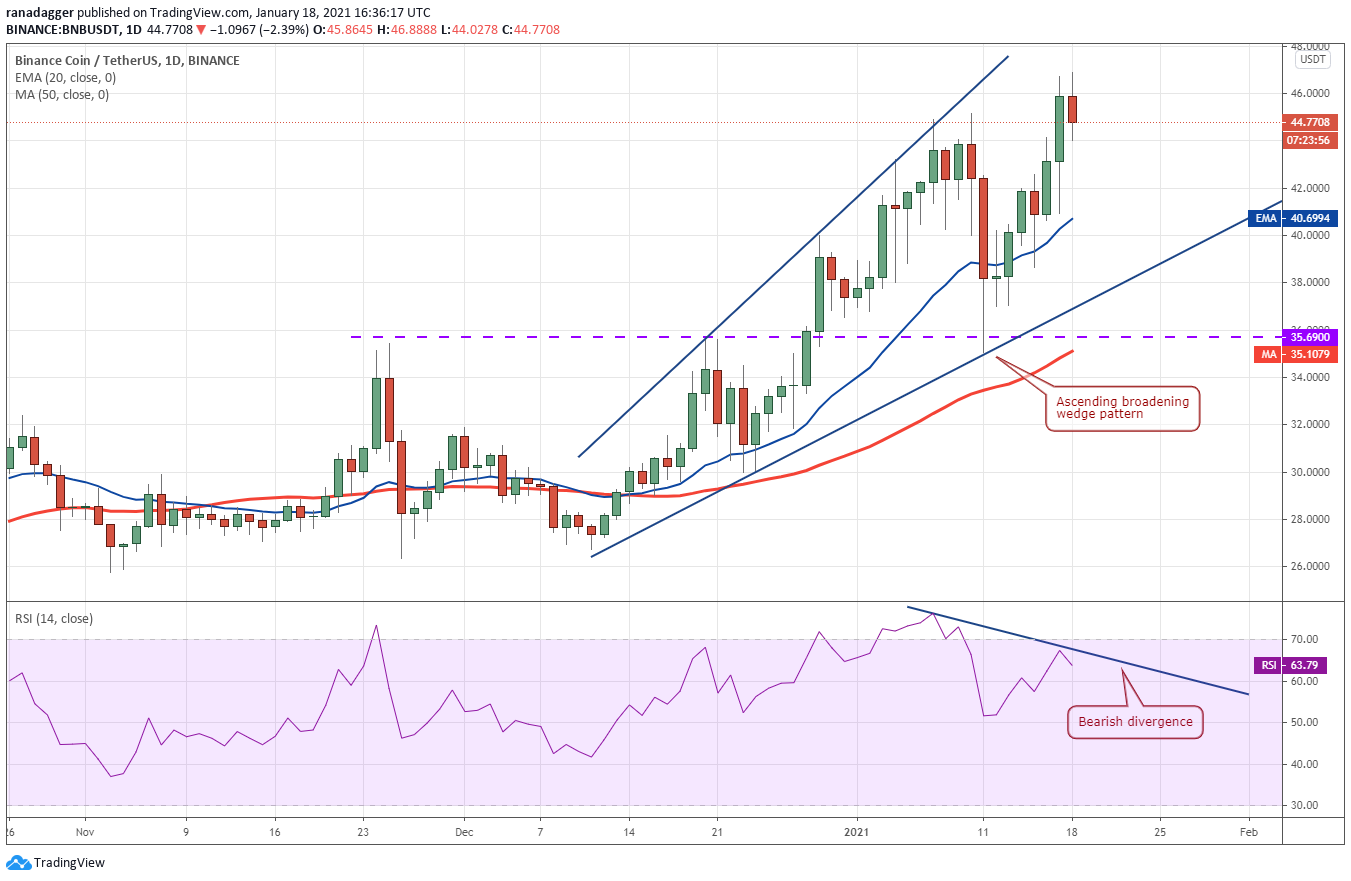 The BNB/USD pair has formed an ascending broadening wedge pattern and the RSI is also showing signs of a bearish divergence. Both these suggest the bullish momentum may be weakening.

However, in a strong uptrend, bearish developments get negated as bulls resume their purchases after a break. Traders can watch the price action near the 20-day EMA ($40) because, if this support cracks, the bears will try to sink the price below the wedge.

But if the BNB/USD pair rebounds off the 20-day EMA, it will suggest that traders continue to buy on dips. Such a move could resume the uptrend with the next target at $50.